Hot on the heels of his celebration of Stravinsky’s creative genius in iTMOi (in the mind of igor), Akram Khan returns to Sadler’s Wells, this time to celebrate the origins that have inspired his own humongous artistic intellect. And he also returns to his particular comfort zone as the performer in this astonishing one-man show, made all the more so by virtue of Khan the master illusionist, making us believe that he is not entirely alone on the stage. A face painted onto the crown of his bald head becomes a voluble, small chef, perhaps a caricature of his restaurateur father; and he spends time telling a story to an imaginary child, Eshita (voiced by Sreya Andrisha Gazi) who sits on his lap and walks with him hand-in-hand.

Desh means homeland in Bengali, which also provides a shortened form of Bangladesh, (where Khan’s parents were born, prior to it being an independent sovereign state) and much has already been written about Desh being some kind of allegorical search for Khan’s identity: a Pilgrim’s Progress for the second-generation immigrant. There is certainly an emphatic autobiographical resonance to the work: in its overt personal references to Khan’s father, dodging traffic in the noisy streets of Dhaka, making sense out of a tech-support call centre to get a faulty iPhone fixed; but also in more evocative scenes reminiscent of childhood stories and terrors in the dark.

Just as Khan spoke of the subliminal references that remained with Stravinsky (such as the crack of ice rupturing on the River Neva in St Petersburg) so there are also mysterious elements here: the thud of an enormous steel-headed mallet crashing down on the earth (causing a woman in the stalls to scream out loud); sitting like Gulliver in an over-sized white chair in Lilliput; twirling upside down in a forest of hanging silk strands; lying in a small boat that meanders through an ever-changing landscape before beaching on an unknown shore. The meaning of these and many other allusions can only be tentatively guessed; and only a fool would bother to try.

The excellence of this work comes not just with Khan’s own enormous creativity and his tour-de-force performance but in the seamless integration of the inputs of his collaborative team: in the outstanding visual designs of Tim Yip, and the exciting digital displays of Yeast Culture which made the hero seem as if he were walking through a live animation; the intuitive, and apparently unfailing, Midas touch of lighting designer, Michael Hulls; the clever writing by Karthika Naïr and the dramaturgical sense of Ruth Little (so often the overlooked skill in a work like this); and last – but by no means least – the score by Jocelyn Pook, as wonderful as the visual and imaginary imagery set loose in our minds. If I have one quibble, just one, then it would be an irritation at not being able to hear much of the dialogue by Khan and in the voices of his “companions”. I have a nagging fear that not hearing these words robbed me of the extra cream on top of this ravishing dish.

It was only towards the end of the creative process for Desh that Khan admitted to himself that a major impetus for the work was about confronting a childhood spent in expressing his British nationality rather than his Bangladeshi heritage. His return to the modern realities of Bangladesh appears motivated by climate change concerns and the very real fear of his parents’ homeland turning into a future Atlantis, not a lost city under water but a lost nation. Perhaps the most vivid contrast comes in this prospect of an impoverished nation on the brink of obliteration, yet one where restoring the voicemails on a mobile phone is the current priority. The emotional resonance of his fascination with the world from which his parents came and the ephemeral chances of its long-term survival make this a most powerful and touching dance equivalent of TVs “Who Do You Think You Are?”

Khan’s work seems to come in cycles, from the Kathak trilogy of Polaroid Feet, Ronin and Third Catalogue to the autobiographical explorations of zero degrees, Vertical Road and Desh. Building on his homage to Stravinsky, the recent announcement that Khan will make a work for English National Ballet in 2014 broadens the horizons of his repertory into yet more fascinating territory. 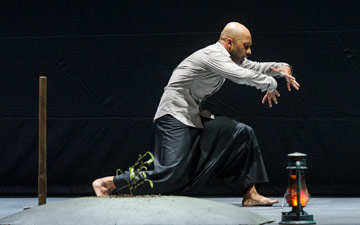