Year after year, I see Balanchine’s Nutcracker, and year after year I marvel at its perfection. This year it turns sixty. The ballet zooms by at a cracking speed. Before you know it, it’s time for the Waltz of the Flowers, and then you’re careening toward the finale. “Not yet!” I think each time as Dewdrop – a role invented by Balanchine – vaults down her diagonal of jumps, circling one leg ahead of her as if to shake off every lingering bond to the earth below. The abandon of that solo, its breadth, captures the thrust of Tchaikovsky’s melody, the surge of feeling beneath the lilting sweep of the waltz. It breaks beyond the bounds of the Nutcracker’s cozy story and into a realm of unbounded emotion.

It’s not just the New York City Ballet orchestra’s brisk tempo, verging on frantic, that makes the ballet feel so dynamic. (Tonight, the conductor, Andrews Sill, brought out the orchestra’s leanest, brightest sound.) Balanchine has made small adjustments throughout the ballet – some not so small – that subtly alter its structure, emphasizing this or that idea, creating a sense of balance and inevitability. He breaks up the classical construction of Sugarplum’s pas de deux at the end of the second act by moving the woman’s solo up to the beginning of that act. Thus, it acquires a purpose: it becomes a dance of welcoming, an introduction to the glistening children’s fantasy that is the Land of the Sweets. (Dancing for the benefit of the denizens of her world and her new guests, the Sugarplum Fairy becomes a benevolent, almost maternal figure.) Then at the end of the ballet, Balanchine cuts out the canonical man’s solo and plows directly into the exciting fireworks of the coda: turning jumps, circles of leaps, super-fast pirouettes. The momentum just builds and builds, right up to the end.

More radically, he inserts music from another ballet, Tchaikovsky’s Sleeping Beauty, into the first act. Used to accompany a scene of pure mime, this intermezzo for violin and orchestra – played with a keen sense of drama by the soloist, Kurt Nikkanen – creates an interlude of deep, human emotion between the cozy party scene and the surreal, yet still scary, battle between toys and mice. Its inclusion here is an indication that Balanchine takes Marie’s anxieties seriously. She rushes to the Nutcracker’s side in her little white nightgown, feet fluttering with urgency. Tiny Avery Lin was a particularly ardent Marie, deeply engaged in each moment of the story. (Her determined toss of the slipper during the battle scene, hair flying, was something of a showstopper. Got him!) The music, with its insistent rising scales and arpeggios, catches in your throat. (I find myself tearing up each time.) It also eerily foreshadows the ascending melody that accompanies the epic growing of the tree.

This structural tautness, combined with some marvelous dance sequences and simple, but very effective stage tricks – the tree, of course, and the sudden reveal of the boy-prince behind a removable Nutcracker costume – have ensured the ballet’s survival for six decades. It always produces the desired effect, even in the slackest of performances, but it must be said that City Ballet does not have many of those these days. The Dec. 9 show revealed a company of impressive depth, energy, vibrancy. Every role was well danced, from the flickering entrechats six in-the-round of the toy soldier (Spartak Hoxha) to the hot-blooded, back-arching hot chocolate of Taylor Stanley and the clean-as-a-whistle sissonnes of Anthony Huxley’s candy-cane. The intriguing corps dancer, Claire Kretzschmar, who has something of the sharp profile and mystery of Wendy Whelan about her, gave a remarkably free, strange, angular rendition of the sometimes vapidly exotic Arabian coffee. The future, too, was well represented: the young Nutcracker Prince, Philip Henry Duclos, from the School of American Ballet, showed poise, clarity, and dramatic sense in his extended mime sequence. The two kids happily plopped sweets into their mouths throughout the entire second act. Everything felt alive.

The ballet’s great female roles, Dewdrop and Sugarplum, were performed by two of the company’s most beguiling dancers, one a reigning ballerina (Sara Mearns), the other a young soloist of great promise and charm (Lauren Lovette). Mearns was irrepressible, grand, almost frightening in her force, bursting through the ensemble of flower-maidens with the power of a torrent overflowing its banks. She looked like she might pop out of her costume at any moment. Lovette, on the other hand, radiated warmth, benevolence, and ease. Both her footwork and her eyes sparkled. In the final pas de deux, accompanied by the no-less-handsome Chase Finlay, there were a couple of wobbly moments, and the jumps onto his shoulder could be more daring, but the feeling was right. Lovette emanated an almost tremulous joy, even in the simplest of gestures, taking her partner’s hand before a promenade. Her feet, arched extravagantly, gave her arabesques an even more extended, pliant look.

Each in her way, Mearns and Lovette give full embodiment to two of the qualities ballet is best able to illustrate: the pleasure of movement, the full expression of feminine form. In the popular imagination, Nutcracker is seen as a light, fluffy holiday entertainment, but Balanchine, and the New York City Ballet, show us that it can be much more. 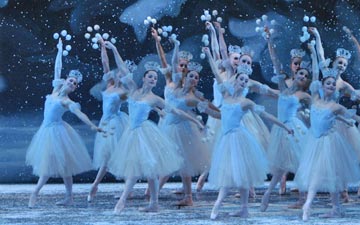 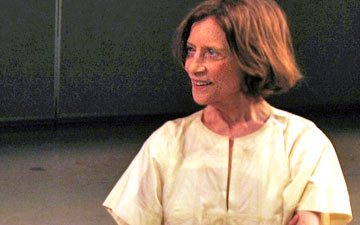