As a closing salvo to mark the end of its New York run, the Mariinsky Ballet presented a program of works set to Chopin piano pieces: Chopiniana (1908), Without (2011), and In the Night (1970). The orchestra was no doubt preparing for its Carnegie Hall performances of symphonies by Prokofiev, Shostakovich and Rodion Shchedrin. Three pianists were left behind to do the honors.

The Chopin mixed bill spans over a century of ballet history. Chopiniana, by Michel Fokine, is often described as the first plot-less ballet. Usually it is performed, not to solo accompaniment, but to orchestrations of Chopin’s waltzes, mazurkas, and preludes; the expanded sound world of the orchestra adds to its dreamy, moonlit romanticism. In the Night, made the year after Dances at a Gathering, is one of several Chopin reveries composed by Jerome Robbins in the sixties and seventies. And then there is Benjamin Millepied, whose work has often echoed Robbins’ informal, we’re-just-people-dancing approach. His Without, which completed the program, imagines a series of encounters, romantic and otherwise, set to Chopin preludes and études.

Too much Chopin? Perhaps. Without and In the Night, in particular, are built very much in the same mold: loosely-knit suites exploring different aspects of male-female relationships. (Without owes even more to the communal feel of Dances at a Gathering.) It does Millepied no favors to be placed in such close proximity to Robbins. Millepied, now the director of the Paris Opera Ballet, is a skilled choreographer; his ballets are handsome, well-constructed, and musical, but often, they seem to glide on the surface of the worlds they describe. They’re pleasing and easily forgotten.

Without is a perfect illustration of this. Inspired by fourteen preludes and etudes, and set within a tenebrous space surrounded by billowing black curtains, the ballet introduces five couples, each costumed in a different color. (Thank god for the color-coding; the stage was so dark I could hardly tell one dancer from the next.) The women’s dresses, simple and down to the knee – also designed by Millepied – are flattering. A series of soliloquies, small ensembles, and, increasingly, pas de deux, unfurls. The mood is generally melancholy; touches of gesture punctuate each dance. A woman crosses her arms, as if to warm herself from the night chill. Another shrugs, “oh well,” when her beau leaves her for another girl. As the situations become increasingly romantic, the mood darkens – love and sadness are inextricably entwined. In one of the preludes, a man and woman (in blue) embrace, taking solace in each other’s arms; he kneels before her, cradles her, then lowers her almost to the floor, face down. The final duet is the saddest of all; it ends with the woman (in red) alone, surrounded by the others, who console her.

The melancholy tone eventually becomes monotonous; one coupling blurs into the next. But the dance is decorous and lovely and shows off the Mariinsky dancers’ elongated, supple lines. How graciously they suffer the pangs of love! In a strong cast, Anastasia Matvienko (as the woman in red), Kristina Shapran (blue), and Xander Parish (green) stood out. Parish has ardor and breadth, and a soaring, pliant jump. Matvienko’s dancing is touchingly unmannered and direct. Shapran, delicate as an orchid, emplifies the technical purity for which the Mariinsky is known. All danced with keen musical sensitivity.

In Robbins’ In the Night, three couples – Anastasia Matvienko, Vladimir Shklyarov, Yekaterina Kondaurova, Yevgeny Ivanchenko, Ulyana Lopatkina, and Andrey Yermakov – danced to Chopin, in this case a series of nocturnes. From the first one couldn’t help but note the specificity with which the choreography responds to each nuance in the music, creating character and drama. Robbins’ phrasing builds long arcs through the music, marks accents, or, alternately, pauses, building suspense. Often, the choreography unspools, almost magically, out of simple walking steps. Each duet creates a mise-en-scène. The slightly over-dramatic third pas de deux depicts a couple (Ulyana Lopatkina and Andrey Yermakov) in crisis. It is immediately clear what kind of woman Lopatkina’s character is meant to be – needy, grasping, fearful of abandonment. And one senses how this relationship will end – badly. The duet closes with an astonishing image – the woman touches her lover’s face, his chest, his knees, as she lowers herself to the floor. Lopatkina, with her maturity and natural reticence, renders this act of abjection particularly wrenching.

The pas that precedes it (danced by Yekaterina Kondaurova and Yevgeny Ivanchenko) envisions an impossibly glamourous pair, slow-moving, exotic. Their dance is tinged with Russian flourishes: a hand on the hip, a slow developpé and mazurka step. Here, Kondaurova – tall, flame-haired, pale as an iceberg – was commanding, chic, irresisitble. (It was the performance of the week, more impressive by far than her turn in Swan Lake.) The opening couple alternates between deliberate walking steps – often traveling backward – , gliding lifts, and pauses in which the two dancers (Matvienko and Shklyarov) project their ardor across great expanses. In the Night lies on the cusp of melodrama, but if it’s danced with restraint and style – as it was at this performance – it lingers in one’s mind long after the curtain falls.

How strange, then, that that the company should make such a pallid impression in Chopiniana, a mainstay since its premiere in 1908. With its soft bourrés, and inclined, contrapposto poses, the corps de ballet was beautiful to gaze upon, and – it goes without saying – admirably in sync. But it lacked poetry, and what is Chopiniana without poetry? (It must be said that the pianist, Alexandra Zhilina, did not give the dancers much dance impetus to work with.) With the exception of Viktoria Brilyova, who seemed genuinely transported during the slow prelude near the end of the ballet in which she listens to the sounds of the forest, the soloists (Oxana Skorik, Yana Selina, and Timur Askerov, Anna Lavrinenko), appeared more preoccupied with getting the style right than with conveying any moonlit longing. (Askerov’s landings were worryingly heavy – more plié, please!) Everyone lagged just slightly behind the beat.

Like last week’s Swan Lake, this performance of Chopiniana was more dutiful than profound. Perhaps, these days, the company’s heart lies more with the newer works. On this visit, it was in the ballets of Robbins, Millepied, and Ratmansky that the dancers came into their own. 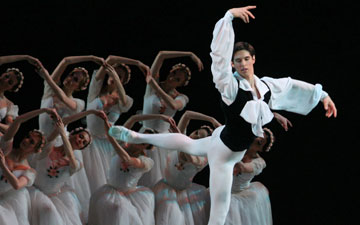 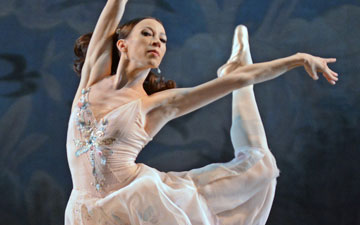 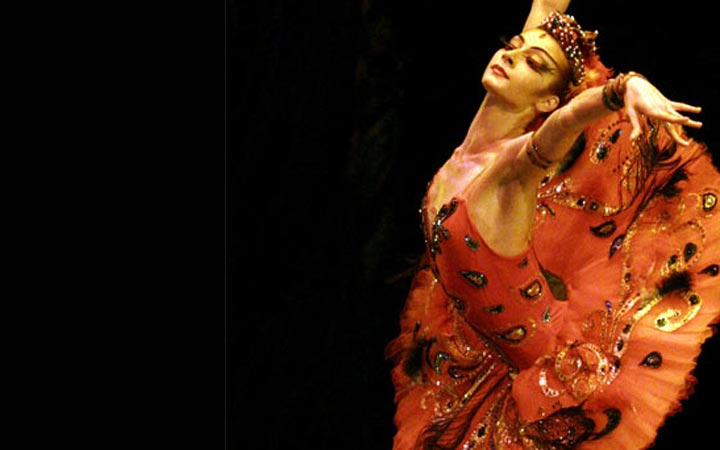 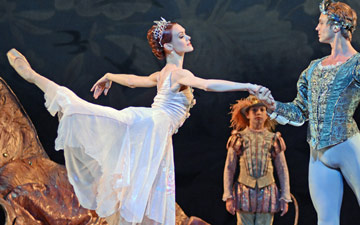