Twenty-one boxes, 20 Shaolin monks and one western dancer – these are the base elements of Sidi Larbi Cherkaoui’s Sutra. The Belgian choreographer’s most lauded work – celebrating its tenth anniversary and 200th performance – is a questing, curious, east-meets-west collision that makes a virtue of its simplicity. It still has the power to surprise and delight – and let the imagination fly.

The artist Antony Gormley created the boxes: plain, coffin-like (60cm x 60cm x 180cm), 20 wooden, one metal. They transformed again and again – they made a maze, a ceremonial line, became a field of stele, a Stonehenge-like construction, stacked berths, plinths, an impregnable wall, dominoes (with a monk in each as they fell), towering, crumbling cliffs, a lifeboat, a slowly unfurling lotus flower.

The monks lay within them, manipulated them, stood atop them and made them fall, carried them on their backs as though the boxes were carapaces. Their world-famous Shaolin temple in Henan province, China, is where Zen Buddhism and martial arts have been blended since AD495. The steely discipline of their kung fu moves – series of katas with empty hand, staff, sword or guandao – bristled with power; their liquid grace was beguiling as their movement segued from that of warrior to dancer; their wry sense of humour was surprising and rather joyous. And among them, scrambling, panting, with knockout skills and endless determination was little Xing Kaishuo, who slipped between their world and that of the western dancer, Ali Thabet (in the role originally danced by Cherkaoui).

Thabet seemed to start as a controlling force, moving the bricks in a miniature model around as though dictating how the real boxes were being configured. Slowly, though, the notion that he had any grip on proceedings was squashed; he was a pilgrim in a strange land, often bewildered, searching for understanding and inclusion – and quite often being thwarted. Quietly implacable monks challenged or blocked him, hustled him off a stack of boxes, chased him with scorpion-styled moves, or just ignored him. A dishevelled Thabet, sometimes pensive, sometimes alarmed, sometimes clowning about with his metal box, accepted all this – and his perseverance paid off when he became woven into a mass synchronised kata at the end of the hour-long piece.

Sutra refers to the sermons of Buddha; in Sanskrit the word means string, or thread. Watching Thabet follow that string – as live musicians behind a semi-opaque screen played Szymon Brzoska’s Chinese-tinged, melancholic score – was a lovely, life-affirming experience, the simplicity of which at times could verge on the sublime. 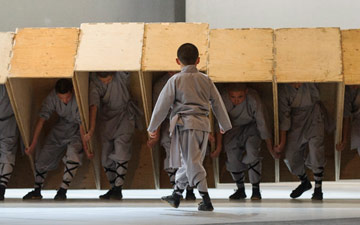 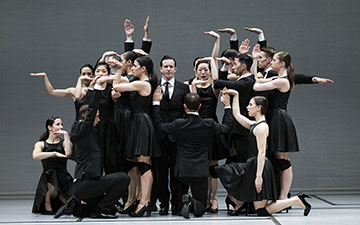 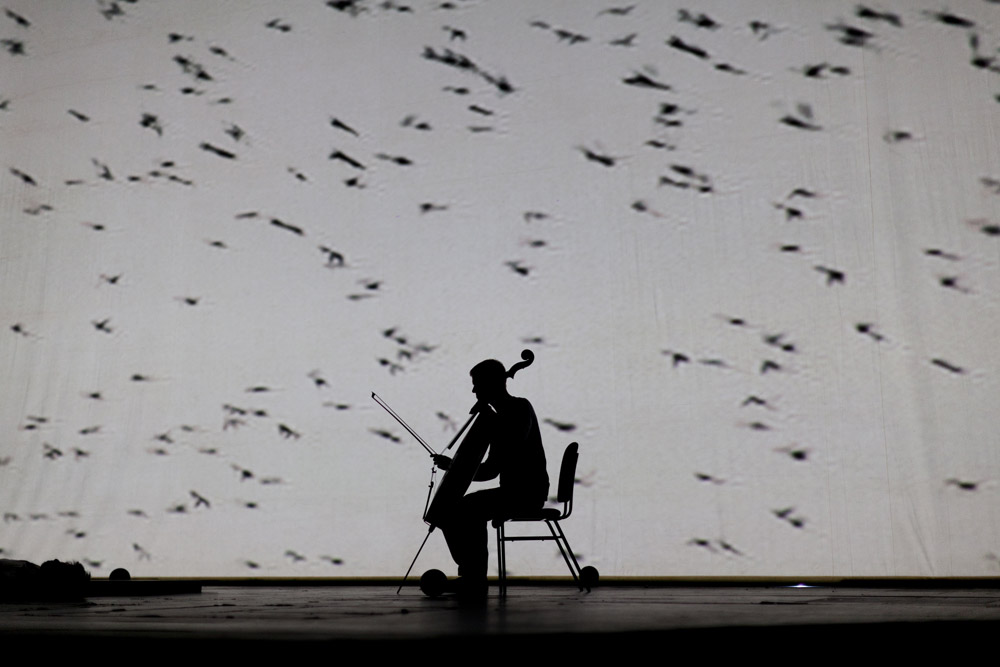