When the presenters come to town in early January for the APAP (Association of Performing Arts Professionals) convention, New York City explodes with dance possibilities. It is – as planned – a chance to catch up. I chose three choreographers whose work had intrigued me in the past, but whose more recent offerings I hadn’t seen.

The audience sits on the stage, some in chairs on a platform around the perimeter, the others in chairs on the floor in front of them. Above is a network of ropes and pulleys that hold microphones, weights, a weight that turns out to be a bell. Audience members are sometimes asked to hold them in tension or lower them for Driscoll. So, too, with the many props – a block of clay, a sheaf of dry eucalyptus leaves that Driscoll will at one point sprinkle on us, pink tape for people to put on her fingers, shoes that are wired to sound out when she enters them, a suspended lemon for her to bite, levers she’ll press to make continuing, reverberant sounds.

Driscoll, in a gray tee-shirt and gray jeans, begins quietly addressing us, reminding us of our daily routines and how we may have gotten to the theater. It’s a little long and so is some of the deliberately paced piece – stated to be 75 minutes, but longer – as we watch her pace the floor or the upper platform, interact with audience members, screech and moan into a microphone and later howl or scream into it – sounds that will continue for a while.

She asks people to hold her hand and when she releases it, we realize her hand has been left in a tense claw. Her face and body, at times impassive, are often highly expressive. Sometimes her mouth or body quivers, engaging empathy. There’s a sense of danger as she pushes a weight across above us, or lies on her back on the sharp corner of a platform, her head hanging below it, contorting her strong, stretching dancer’s body into shapes that are perilous, but also sometimes dangerously beautiful.

She has thanked us for coming and she is eager for our participation. She conducts parts of the audience to stamp their feet and later, in another round, she gets each section to stamp, until we are all stamping, a more cheerful sound than those she herself makes and layers. A heavy weight turns out to be a bell and after its release she rounds the platform with a small, delicately rung bell.

A sense of very controlled chaos accumulates. I’m sometimes reminded of the videos and installations of the artist Bruce Nauman. Her actions and interactions, including snatches of willfully, wonderfully contorted dancing, throwing the heavy block of clay and snatching parts of it off, scary swings of weights above us, initially puzzling, take on a cumulative weight.

I begin to feel that she is limning not just the terrors of an individual, but those of the whole world that humans have created. We don’t feel safe in Space. The layer of sounds intensifies into an uncomfortable roar. Driscoll contorts on the floor. The well-lit stage deeply darkens. Not just personal horrors, not just the social catastrophes of the perilous world we inhabit, but also the natural ones (some intensified by human activity) – earthquake, storms, volcanoes – seem to envelope us. A woman, upset by the uproar, leaves. It continues and the intensity begins to seem like an apocalyptic climax. This becomes so powerful I feel it’s a natural and cannily constructed theatrical end to Thank You For Coming: Space.

But Driscoll isn’t finished. She goes to the back of the stage and addresses us as she had initially from the front of the stage. But now she has many props to show us. Holding them up, she begins calmly: “This is your brush.” “These are your eyeglasses.” “This is your journal.” And so on. And then, with dripping props, she names parts of the body: pancreas, heart, liver, pooling blood, changing colors of skin, and it’s clear that this is a dying body, a disintegrating body, a body in which the heart has stopped but the brain, she says, stays alive for a few more minutes. And then rigor, followed by softening and dissolving as the vast microbiome that inhabits the body, joined by that biome that completes the body’s return to nature, take over.

Driscoll gets the audience to sing (though I don’t). “You are all things,” she says, “You are so many,” she repeats and repeats. The dead body has joined with the earth, with the cosmos.

I appreciate this journey she has taken us on, but I am a little restless by now. I would have felt at one with the apocalyptic universe more powerfully if she hadn’t concluded with the dying and decaying body. But clearly this ending is very important to Driscoll. “This show,” the program says, “is dedicated to Maureen Delvina Byrnes and Lawrason James Driscoll. You are so many now.”

Though pain, anger, and despair are inherent in Space, it wasn’t evident to me that grief was their motivator until this last talking session. Clearly this was necessary for Driscoll, but, oddly enough, if she hadn’t concluded this way, Space might have had even more universal power to enter us.

Thank You For Coming: Space was conceived, created, and performed by Faye Driscoll – and impressively so – with visual design by Nick Vaughan and Jake Margolin, lighting design by Amanda K. Ringger, and sound design by Andrew Gilbert. 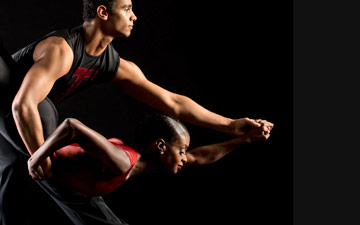 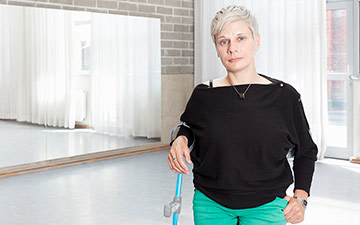 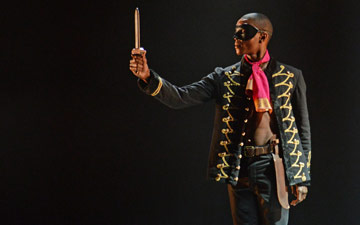