Five years on, it’s amusing to see what strange new resonances there are in Luca Silvestrini’s song-and-dance drama about our conflicted relationship with food. It’s not necessarily what we could have guessed when it was recorded at The Place in 2016.

“Let us open our hearts in thanks to the staff of all the major supermarket chains,” the cast intone, like a family assembled for grace (this hard on the heels of the sad funeral rites for a red pepper). Amen, you think grimly from the vantage point of 2021. “To the articulated lorry driver…” Yes, especially after Christmas in Calais. “To the EU subsidies…” Ah…

The four dancers and four singers begin May Contain Food whirling about dressed as waiters, with the audience seated at tables around the stage. They conjure an almost courtly air as they swoop and dip, singing Orlando Gough’s acapella compositions, which play with the cultural, emotional and political significance we load on to food.

This streaming is offered as an eat-along participatory experience – it is suggested that you prepare the same food that the audience is given (recipes provided). One cherry tomato, which you are encouraged to rub over your face, kiss and name before eating; onigiri (Japanese rice balls), kale crisps and sticky ginger pudding.

That’s quite a high degree of commitment. I managed the tomato, and was in a way relieved I hadn’t done the rest, as I wasn’t left with much of an appetite. Things take some quite dark turns in this devised piece, whether it’s the singer smearing a trail of blood across a white-tiled wall as she offers a hymn to meat, or the performer asking us to imagine each rice grain from our onigiri screaming in agony in our stomach acid, or the lurch into the topic of inhumane farming practices, during which the dancers’ sweaty grapplings turn into them offering each other on platters. And, a year into this pandemic, to watch someone eat with a spoon that they then proceed to put, unwashed, in the mouths of two audience members put me right off my supper.

Marketing tricks and greenwashing, our obsession with appearance over taste, the way we’re taught to think about food (“Don’t eat that, eat this”), the rise of vegetarianism, food as aphrodisiac, as a way to mark events (disastrously, in the case of one angry couple’s anniversary dinner): the net is certainly cast wide. Not especially deep, though, which leaves May Contain Food feeling like more of a scattergun explosion of thoughts than a piece that leaves you with something to chew on.

The confines of the space make for a limited palette of movement, but the dancers’ spins, sinuous turns and held poses are often striking. Sadly, though, in this streamed iteration, it’s not always clear what’s being said/sung – sound is lost, Dancing Cavalier-style, when the performers turn away from where the mikes are positioned. It makes you pine even more for the live theatrical experience. 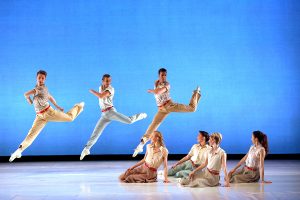