There was much to like about the Bolshoi Ballet’s new production of Coppélia which the Russian company brought to the Kennedy Center Opera House in the last week of May – the fascinating choreography, the magnificent music, the stylishly recreated sets and costumes and, above all, the first-rate performances of the Bolshoi’s cast.

“If Giselle is ballet’s Hamlet, Coppélia is its Twelfth Night – its masterpiece of comedy,” wrote Edwin Denby about this cheerful and witty ballet originally created by French choreographer Arthur Saint-Léon for the Opéra de Paris in 1870. In 1894, the Mariinsky Ballet of St. Petersburg premiered its own version of Coppélia with choreography by Marius Petipa and Enrico Cecchetti.

The ballet’s scenario was inspired by the spooky tales of E.T.A. Hoffmann, Der Sandmann (The Sandman) and Die Puppe (The Doll). Yet despite the Hoffmannesque mysteries threading the plot, the ballet is a sunny, lighthearted affair. The story, set in a Galician village, has a simple romantic narrative: the beautiful and enigmatic Coppélia, who in reality is a life-size mechanical doll created by the local toymaker and alchemist Dr. Coppélius, puts the upcoming wedding of the two village sweethearts, Swanilda and Franz, in jeopardy since the groom-to-be seems to be head over heels in love with this mysterious girl. The strong-willed and ingenious Swanilda reveals the true identity of Coppélia and wins back her straying boyfriend, and the third act’s wedding festivities gloriously cap the whole matter.

In Moscow, for more than 30 years, Coppélia was associated with young dancers and performed mostly as a recital piece by Bolshoi Ballet Academy students. In 2009, however, thanks to Sergei Vikharev, the Bolshoi premiered a brand-new staging of the old classic. A former Mariinsky dancer and choreographer, Vikharev is a leading practitioner of the reconstruction of the 19th century Russian ballets, particularly those choreographed by Petipa, and it was the 1894 Petipa/Cecchetti version that Vikharev reconstructed for the Bolshoi troupe. In doing so he used Mariinsky ballet records based on the Stepanov dance notation system from the Harvard Theater Collection.

The Bolshoi’s new Coppélia was heavenly fun. Vikharev’s production brought to the fore the Russian ballet tradition of expressive pantomime and spirited ensemble dances. (The first act’s mazurka and czardas were breathtaking and danced to the hilt.) At the same time the production accentuated the poetic mystery of the ballet’s story and its warm, affable charm.

On opening night Nina Kaptsova was an enchanting Swanilda: fun-loving, curious, and charming. With her upbeat personality and effervescent style of dancing she sparkled as a young and witty peasant heroine determined at any cost to keep her wayward fiancé. Kaptsova’s acting was superb, her pantomime vivid and clear. She was bubbly and animated in her opening solo set to a beautiful waltz. At first, all manners and poise, she danced with an impeccable grace and courtly manners in order to attract the attention of the lovely young girl who sat motionlessly in the window of Dr. Coppélius’ house. A few moments later, she angrily stamped her foot and shook her fists at the inscrutable lady, visibly annoyed by her lack of response. Kaptsova played this sudden change of Swanilda’s heart toward Coppélia with such naturalness and poignancy that the entire scene looked both touching and irresistibly funny.

Elegant and lively, Kaptsova illuminated each phrase in the “Ear of Wheat” dance with a wonderful emotional sentiment. The best moment came when, sneaking in the house of Dr. Coppélius, she pretended to be his favorite mechanical doll that had come to life.

Kaptsova’s comic timing was flawless, and so was her dancing. With dramatic fervor, she breezed through the Spanish solo and Scottish gigue of the second act and brought a touch of brilliance to the Act’s III wedding pas de duex.

Artem Ovcharenko was a sensitive and dreamy Franz. A poet rather than a ladies’ man, he was increasingly attracted to the mysterious stranger, preferring her quiet demeanor to the sparkling personality and unstoppable energy of the real-life heroine. Ovcharenko imbued his character with a boyish charm and subtle humor. In the third act – the only time in the entire ballet when Frantz gets to show off his skills – his dancing was clean and well placed yet somewhat lacking the technical assurance and brio the role demands.

Alexey Loparevich delivered a brilliant portrayal of Coppélius. Tall and nimble, he played the village toymaker as a mad scientist and genuine eccentric in equal measure. His happiness and wonderment at watching the supposed Coppélia come to life was filled with unambiguous pathos; and then, when Swanilda’s deception was revealed to him, he seemed to be truly heartbroken. Through intelligent acting and expressive mime Loparevich made his Coppélius thoroughly real: we laughed at his alchemic aspirations but at the same time we sympathized with him when his dreams of creating life were shattered.

On Saturday night, Maria Aleksandrova and Ruslan Skvortsov played the young couple, with Alexey Loparevich reprising his performance as Coppélius. Aleksandrova proved a natural Swanilda: she has a gift for comic roles like this. Her performance was the complete package – beautiful dancing and compelling acting. A true Galician belle, she sailed through the dances with a fantastic technical vitality; her temperament was bright and sweet, with a pinch of real naughtiness to spice up the role.

Ruslan Skvortsov was her love interest, Franz. An ardent dancer, with plenty of physical charm, Skvortsov made a perfect match for Alexandrova’s Swanilda. He flirted and teased his way to Swanilda’s heart, giving a winning and totally likable characterization of his hero, all his transgressions being forgiven. His dancing was effortless and technically assured.  He was relaxed and seemed to be completely enjoying himself, turning his love quest for Coppélia into an innocent frolic.

Coppélia’s music by the French composer, Léo Delibes, is a major highlight of the ballet. The Opera House orchestra under the baton of Bolshoi Ballet music director Igor Dronov played with boundless enthusiasm and spirit, delivering a full-bodied rendition of the marvelous score. 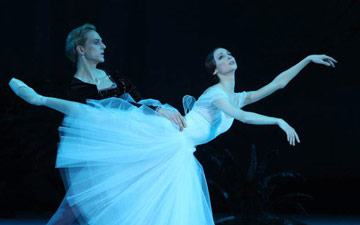