Rodin, like Degas, frequently sculpted dancers in action, leaving the statuettes roughly finished rather than sleekly polished (unlike some vile modern figurines  of ballet dancers). They were trying to capture transient moments in solid, static images – far harder than a choreographer turning those frozen forms back into movement.

Rodin’s art and life have been the subject of many ballets – at least four in recent years, inevitably involving his love affair with the sculptress, Camille Claudel: all too easy for a choreographer to recreate her as the model for The Kiss, or for a Muse or Nymph. Russell Maliphant mostly avoids the obvious in The Rodin Project by insisting in a programme note that the piece isn’t biographical: ‘It’s about the inspirations that we take from Rodin and what inspired him’.

In Afterlight, Maliphant and his lighting designer, Michael Hulls, animated Nijinsky’s obsessive circular drawings into a remarkable swirling solo for Daniel Proietto. Nijinsky’s troubled musings were spun into dance. In The Rodin Project, Maliphant and Hulls transform dancers’ flesh into plaster, marble or bronze as they assume poses from Rodin’s sculptures. Spectacularly top-lit, their lithe bodies lack the rough-hewn power of Rodin’s creations (or Claudel’s). Only in the second part of the piece, referring directly to Rodin’s The Gates of Hell, do the dancers accomplish the feverish, off-balance movement the sculptor worked for 30 years to immortalise.

The Project is split into two halves: white, soft and slow; dark, hard and fast. In the first half, Es Devlin’s sloping set suggests an artist’s studio. Heaps of cloth used for clay and plaster modelling are piled high; swathes of suspended fabric are pulled aside to drape women’s bodies. Since the women already wear mini-togas and the men are in loincloths, they presumably represent the classical statuary that Rodin studied. Alexander Zekke’s assertive score sounds like the scrapings and tappings of chisels.

Now the six dancers are either in street clothes or virtually naked. The set, stripped of its sheeting, is all hard angles with a steep wall at the back. The unyielding surfaces serve as slides and diving boards for parkour acrobatics. In The Gates of Hell figures writhe and tumble in high relief around the frames of doors Rodin designed for a museum entrance. The effect is so destabilising that it’s hard to tell whether the damned souls are climbing or falling. Rodin recycled some of the figures as stand-alone statues, including the crouching Thinker – maybe originally intended as Dante.

Maliphant isolates his dancers in sequences punctuated by blackouts, as though featuring different aspects of Rodin’s creations. After a virtuso group display of leaps, spins and rolls over each others’ bodies and the set, there’s a sudden stillness. Hulls’s golden lighting sculpts a nude female body in sensual curves and dusky folds. The men come forward to arrange her positions on a plinth – a lapse of judgement on Maliphant’s part. They’re wearing cloaks that make them resemble The Burghers of Calais, or Rodin modelling Camille. Once they’ve gone, the music goes soulful for her fluid, lonesome solo: beautiful but verging on dance as look-at-me-art. (For a spectacularly bad example, see Boris Eifman’s Rodin ballet on YouTube.)

Then it’s the turn of Dickson Mbi to become a Rodin bronze, which he does heroically. He’s the most anguished soul of all, striking knotted poses and bringing different muscles into play, burnished by light from above. Tommy Frantzen springs into action in an athletic solo, fusing breakdancing and capoeira as though he were molten metal. The music, harsh for the group’s tumbling, eases into jazzy droning. The women, three graces or shades, mark time by the back wall.

The climax of the entire piece is a breathtaking duet for Franzen and Mbi, treating a vertical surface as though it were the floor – the disorienting device of Rodin’s doorway. As if magnetized, they cling to the wall and each other’s bodies, changing places and defying gravity until Frantzen hangs down Mbi’s back. The duet starts and ends with Frantzen perched on top of the vertiginous wall. The piece should finish on the high note of the duet. Instead, there’s a group finale with supplicant hands (Rodin sculpted lots of pairs of hands) picked out in light.

The Rodin Project suffers from the same structural problems as Maliphant’s expanded Afterlight. He’s poured his and his dancers’ creative energies into a superb solo or duet. Then he’s added sequences for more dancers based on improvisation around an artist’s life and work in order to make a ‘full-length’ evening of dance. Though Hulls’s mesmerising lighting skills help make the various aspects cohere, they still have the feel of workshop segments filling out the music until the real reason for the piece arrives. 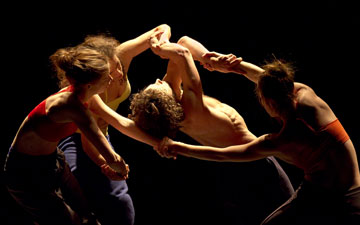