English National Ballet
Choreographic Evening – Choreographics – A Letter to…
Hooked, A Fruitful Death, Work in Progress, Domna, Waiting for the One, [co][hes][ion]
London, The Place
3 May 2013
www.ballet.org.uk
www.theplace.org.uk
www.enbschool.org.uk

In taking over directorship of English National Ballet (ENB) one of Tamara Rojo’s prime aspirations is to be “The go-to company for creatives“. We’ve yet to see this fully hit home at all levels but one thing she did was ask her newly-appointed Associate Artist, George Williamson, to start growing creative partnerships for emerging talent in the company. It’s a big ask as Williamson is only 3 years out of English National Ballet School himself and chasing his own significant choreographic aspirations. The first push in this direction is a collaboration with the Royal College of Music in which young composers were matched with young, or first time, choreographers to create brand new work. Normally choreographers would only expect to move to using custom scores after showing considerable promise and success, so joining newbies to newbies (forgive me) is a hell of a thing, with zippo guarantees of great work. That said, it should prove an enriching experience to all and hopefully grows talent in interesting ways. To provide project muscle and mentoring in what is uncharted territory, the experienced Kerry Nicholls was brought on board and several of those involved thanked her for all her support and encouragement.

In all there were 5 ENB pieces performed but the short evening started with English National Ballet School’s Choreographic Platform Competition winner and a piece – Hooked – in which the choreographer, Emmeline Jansen, selected her own music – part of The Da Vinci Code soundtrack by Hans Zimmer. It’s brooding music and then explodes with sweeping strings 2 minutes in. I thought this piece for 2 girls (Jansen and Ashley Scott) showed choreographic promise with its snatched, fluttery, movement and strange coughing shrugs. But toward the end of its 3 or 4 minutes minutes it got confused with long silence and sudden down-lighting out of kilter with the broader sweep of it. But it certainly held its own against the company pieces that followed. Hope Jansen does more.

A Fruitful Death, by Makoto Nakamura and composer Gerardo Gozzi, looked to explore Japanese notions of death by focusing on the good of the life that was, rather than its sudden end. The score was full-on Japanese – sparse percussion and wind instruments as if for Kabuki. A 10-minute three-hander for a girl (uber-pared-down Anais Chalendard in her last performance with the company) and 2 boys, Juan Rodriguez and Junor Souza; there was a solo for her and duet for the boys with mirrored moves but it only really started to take off for me when the 3 performed together with some clever thrown lifts. Not sure I know much more about death but the good partnering fragments are worth exploring more and it’s interesting to see an unusual subject tackled.

Stina Quagebeur had a great idea sparked by a Philip Larkin poem in which a man (Nathan Young) becomes involved with 3 very different women, none of whom match up to the siren cocktail-dress-clad girl of his dreams. Domna featured some interesting partnering and close manipulation, not least with a tough-nut and smouldering Adella Ramirez. The sadness was Laurence Osborn’s screechingly discordant music which didn’t really go with the idea or movement and being over amplified was rather an assault on the ears, too. Anyway the movement needed other music or the music other movement. A shame.

First Soloist Fabian Reimair got the obtuse title award with [co][hes][ion] and the most words on the programme sheet trying to say what it meant. The score, by Raquel Garcia Tomas, had an atmospheric sci-fi feel and there was a good cast of six including Erina Takahashi and Nancy Osbaldeston. But other than that it didn’t really register so strongly. It all seemed too complex and too clever-clever, and I just gave up on it all. Sorry. The piece before it, Anton Lukovkin’s Waiting for the One, with music from Andrew Baldwin, was much more straightforward and clear: nominally about human relationships it was also declared itself abstract… and in actuality had a huge whiff of Balanchine neoclassical movement and Stravinsky music to it. This was fine because it was done pretty impressively and he deployed his cast of 7 (the most in any piece) well across the stage. I particularly liked Bridgett Zehr as the lost girl in a coupled-up world. Lukovkin has a keen and structured eye and I want to see more.

The all-out best piece in this night of serendipity came from composer Ryan Cockerham and First Artist Tamarin Stott, making her debut as a choreographer. The idea was simple: to reveal what dancers are thinking just before entering the studio or before a performance. Cockerham’s soundtrack featured the voices of the dancers sampled and overdubbed with breathing and an occasional radio tuning buzz as you ‘changed channels’ across the space and thoughts. “Release that Tension”, “Concentrate”, “Calm” were some of the words that floated by as the 4 dancers operated in their own separate boxes of light, warming up, stretching, each lost in their own fluid inner place – almost narcissistic in their free movement. They eventually all get going together and are synchronised and counting steps etc. Aside from the strong down-lighting the dancers were dressed in loose t-shirts and trunks – all very contemporary and chic. The net result was an illuminating piece, for now called Work in Progress, that looked thoroughly modern and where dance and soundtrack fused to be more than the sum of the parts. I have no idea if Stott just mined this gold as a one-off or it portents greater things. I hope the latter, but we won’t know until she does more!

All that really underlies why nights like this are put on. I’m not sure if this is the best way to grow choreographers but it does usefully mix it up differently and in presenting the results to a paying public they all get some feedback on their success or otherwise – that experience above all is priceless. I hope ENB do lots more short and sweet choreographic initiatives to real audiences. Well done all, great to have a go – now do more. 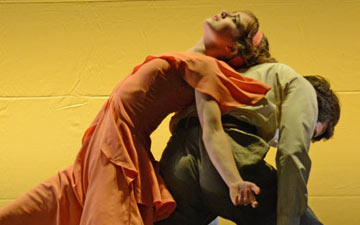 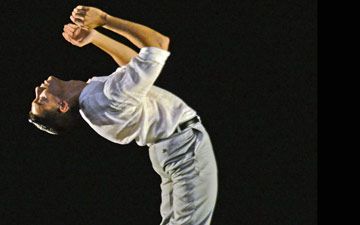 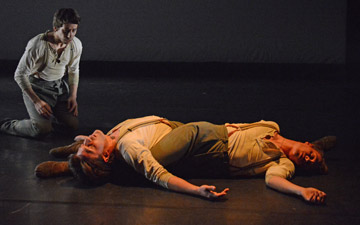 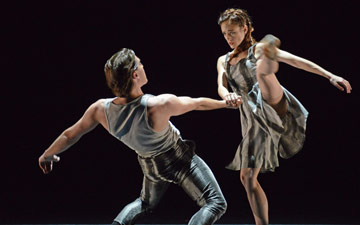