The most powerful and innovative of ideas often stem from a surprisingly simple premise. There is so much new dance made every day, all over the world, utilising the same limited movement potential, and how to create something new and interesting from this finite range of possibilities is the challenge for every choreographer. Lucy Guerin’s idea for Untrained couldn’t be more mundane: take two highly-skilled male dancers and two men without any movement training whatsoever; and then put them through the same regime of executing a catalogue of movement exercises, one after the other. The concept might seem as dull as ditchwater but it turns out to be anything but boring. In fact, I have rarely laughed so frequently watching dance (excepting Pina Bausch) and this 70-minute show rattled along without the need for any watch-watching.

Untrained began life in Australia in 2008 but has now been performed across five continents. Regular cast changes are necessitated because the inexperienced members quickly lose their raw edge. It’s not that they become skilled, just accustomed to performing, thereby shedding their credibility as the untrained. The pair filling these shoes at the Purcell Room comprised Michael Dunbar (a freelance user experience designer, which seems a strangely appropriate job for this sort of performance) and Jake Shackleton (a former pianist now working as an environmental engineer with the Port of Melbourne Corporation). They are already beginning to look like seasoned stage performers, not least in employing creative comedic skills, both in their physical and spoken humour.

They had been chosen well for the purposes of visually setting the scene for physical comedy. Dunbar is a large man, tall with a notable belly, but he moves gamely and with surprising flexibility; Shackleton has a full beard and a full head of hair, close cut at the sides. He resembles the American comedian, Zach Galifianakis (the small bearded one in the Hangover trilogy), giving his initial nervous stiffness an immediate humour. While they obviously failed abysmally to match the suppleness and range of the two trained dancers in the early trials (ranging from pirouettes to breakdance spins) they began to gain equality when carrying out physical theatre tasks (such as mimicking the movement of an inquisitive cat that is electrocuted and showing how they remove and replace a t-shirt).

The trained dancers – Alisdair Macindoe and Ross McCormack (whom I remember well from his recent work with Les Ballets C de la B) – are also in an overt competition with one another, with the second to demonstrate exercises always trying to outdo the first, while Mike and Jake are just about surviving each move!

It is probably counter-productive to seek too much insight from this caper and I was initially struck by a brief concern about dance being reduced to a series of circus tricks performed in turn by skilled and unskilled practitioners. It seemed like a new celebrity dance game where the willing amateurs are put up to compete against their professional partners, heightened by the fact that we all clapped after each “round”, which is perhaps just one stage removed from holding up scorecards. It is also so unashamedly Antipodean and macho that it could have been the premise for a new Fosters commercial: imagine two men holding the cans of lager in their tent on the beach; the phone goes and a large man with a beer belly comes into shot, saying (imagine Aussie accent) “how do I impress me girlfriend at the dance hall, mate?”…….

The opening exercises exacerbate the differences between the two pairs of men, with the untrained always having to follow the trained, but their natural wit and humour quickly establishes a synergy and when the dancers begin to talk about themselves (including brief, incongruous monologues about relationships with their fathers) the four become equals in spite of the disparity in the freedom of their accompanying movement. Untrained may begin as if some cruel locker room initiation being dolled out to the High School nerds but it ends in one big bromance. You can just see these four together on a bachelor party to Las Vegas. 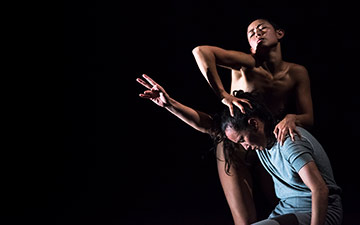 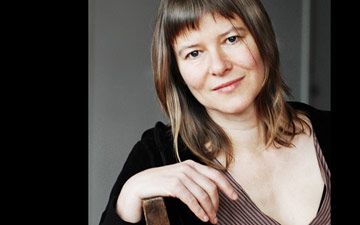