William Trevitt and Michael Nunn brought their 10-strong company back to Sadler’s Wells in a programme featuring two of the most in-demand choreographers working in Britain today, Liam Scarlett and Russell Maliphant. The programme premiered earlier in the year and had visited Sadler’s previously.  The return proved popular with a packed house.  It was pleasing to see Sadler’s Wells so full, after some rather thinly-attended offerings of late and to see so many young students in the audience.

The company’s particular selling point is that it is men only. Nunn and Trevitt, joint Artistic Directors, the original BalletBoyz, have now retired from dancing and run a company much larger than their original group. The dancers are selected via open auditions, which have thrown up some unexpected recruits.  These are not just the usual suspects from the major dance schools but some with training at secondary school or no dance training at all. They manage to preserve their individuality and yet still appear cohesive with a common purpose as a group.  The first work of the bill has them shirtless to the evident delight of the teenage girls in the audience, all the better to admire their fine physiques and various tattoos.

Nunn and Trevitt’s choice of choreographers has been very shrewd and they have supplied an outstanding evening of dance, lyrical and fluid, yet muscular and powerful.

The Royal Ballet’s Liam Scarlett is very much in demand this year with commissions from Norwegian Ballet, New York City Ballet and others.  This is rather outside his comfort zone of the ballet pointe shoe and male / female partnering, and is all the better for it.  Serpent has no storyline but celebrates a movement quality – fluid and slow, coiled, powerful. The work opens with the dancers lying on their sides lit by one of Michael Hulls’ glorious bursts of colour.  One by one their hands twist and rise, like plants growing out of the soil.  The work is set to music by Max Richter.

The first fifteen minutes are full of invention as Scarlett experiments with sculptural groupings of all ten dancers, smaller groups and duets featuring athletic lifts.  It doesn’t quite sustain the standard of the opening sections for the full length of the piece. Some of the later sections where pairs of dancers sweep and interlock their arms around each others’ shoulders seem in debt to some of Maliphant’s earlier work. But it is still a beautiful and very satisfying piece, which seems in its way more successful than some of Scarlett’s creations for the Royal Ballet.

It is certainly aided by the lighting design of Michael Hulls, the long-time collaborator of Russell Maliphant, who lights both works on the programme.  For Scarlett he lights the bare stage with changing washes of gorgeous colour. For Fallen, the Maliphant work, which is has a more tribal, aggressive feel, he uses familiar tight pools of light to concentrate the action so that the surrounding darkness has a threatening force.

Trevitt and Nunn themselves appeared in many works by Maliphant, who has previously restaged some of these for the company. If there is a house style for The Talent then Maliphant is it. You can expect the dancers to be clothed more or less as if off the street. They will prowl about in semi darkness before flinging themselves up and over each other, finding some unlikely balances, and unexpected ways of supporting one of their members aloft before slowly tumbling to the floor, all set to a darkly modern score.   This is what we find here, delivered with a mix of casualness and precision, fluid, but tightly structured.  The score is by Armand Amar.  The encounters between the dancers could be banter, confrontation, the beginning of a fight, or maybe a highly-charged ritual. Certainly the striking opening with five dancers in a ring with the other five perched on their shoulders has a stark ceremonial quality. It is meat and drink to the members of the company who devour its language with gusto.

The programme was received with real enthusiasm by a very lively Sadler’s audience.  There are a couple of further dates this month in Exeter and Truro.  It’s very definitely worth catching for an energetic and engrossing evening of dance. 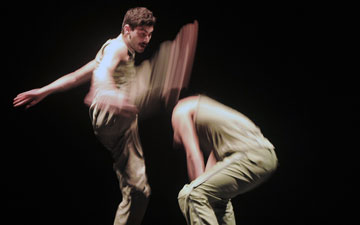 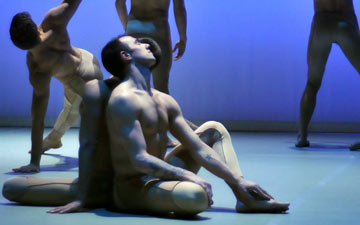 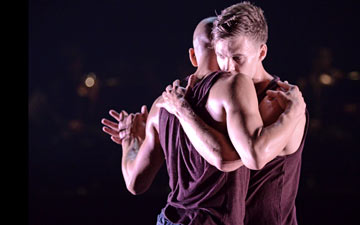 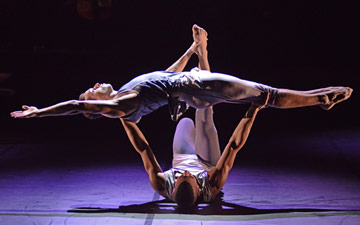