It’s been five years since Mark Morris brought his group to London and they have been much missed. The air of anticipation in the audience was palpable. All the works on the programme were new to London and recently created. Mark Morris has arrived like Santa come early with a bag of unknown items. Would they be what we always wanted or something you need to hide your disappointment over ? In this programme we got some shiny new toys, maybe quirkier than we imagined, but some definitely to keep and treasure.

Excursions is set to Samuel Barber’s Excursions for piano, played for us by Colin Fowler. One of the amiable points about the company is that the dancers and musicians are listed alphabetically in the programme booklet, as members of one enterprise rather than hiving the musicians off to a separate section. Everything about these performances underlines that sense of common purpose.

Excursions’ setting is simple. There is a rectangle marked out on the floor, and a string of fairy lights strung across the backdrop being the sole décor. There are three men and three women taking their place inside the rectangle. But you realise that is all that is required. Morris employs such simple means to make a complex and satisfying whole. The dancers in the opening section are playful, almost goofy. One of their repeated gestures could be bouncing a ball. The atmosphere changes in subsequent sections. The lights disappear, the tone of the dance is darker. The dancers keep collapsing, trying to hold each other up, rising and falling again. It’s remarkable how much variety Morris can get out of the simple motif of setting them marching around the central square, always varied here and there with some little twist. The movement seems absolutely right and logical for the music and yet fresh and unexpected at the same time.

A Wooden Tree is set to the recorded songs of Ivor Cutler, definitely an acquired taste and a very quirky one. He was an eccentric, a poet and songwriter, often featured on the late John Peel’s show. It’s not an obvious choice at all for dancing. Cutler’s songs are quite bonkers, his voice struggles to hold a tune and the surreal lyrics sometimes break off suddenly. For this, Morris provides a cast of five women and three men costumed as if for a night out in 1950s Scotland (big skirts and petticoats for the women, woolly hats). His response to the lyrics is startlingly literal, miming the actions described and sometimes quite bawdy, acting out what Cutler only implies. Most of the audience found it very funny. It is a very British sort of humour. It is possible though that you might find this unbearably twee and kitsch. But it sent the audience out for the interval in a happy and talkative mood.

Jenn and Spencer is a duet named , one presumes, for its two dancers Jenn Weddel and Spencer Ramirez. It is set to Henry Cowell’s Suite for Violin and Piano, played here by Jessie Mills and Colin Fowler . (Morris’s musical choices here at least make me wish I heard more of the composers concerned.). There is no obvious narrative here but because there is a man and a woman, we cannot help but look for the nuances of their relationship. They enter from opposite sides of the stage and circle one another, moving faster as they approach, as if drawn by gravitational force, but then spiral away as if suddenly repelled. They do come together but break apart: it is a tricky negotiation, a many layered connection between the pair.

Festival Dance, for six couples, is the closing work. The music here is a piano trio from Hummel. The work lives up to its name: it does have a festive air as if the community are gathering for a celebration. There is a formal, courtly air to each. Each man introduces himself politely to his partner at the beginning of their duet. The dance uses a number of folk idioms. Dancers hold hands and move in circles. They move in straight lines facing one another, and pair off as in a formal country dance. There is no straining for effect, or extraneous displays of virtuosity, just a calmly rational assembly of components to build up a richly detailed picture.

Although it’s been quite a while, some of the dancers are instantly familiar from previous visits. What has always been notable is how the individuality of the dancers shines out on stage. These are not clones all matched for height but a variety of heights and body types. They look more convincingly like a real community as a result, and their personalities, warmth and commitment are key to the success of the work. 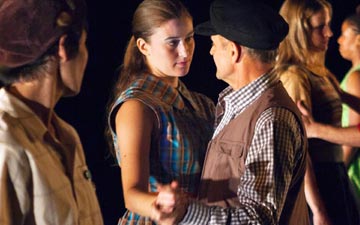 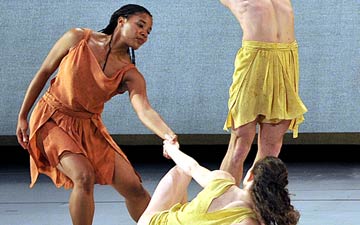 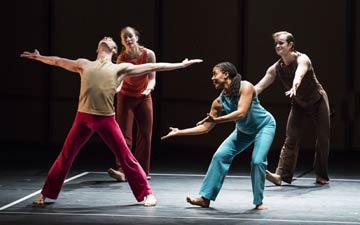