It’s just two weeks now till the 100th anniversary of Benjamin Britten’s birth, and during the preceding year his music seems to have been everywhere. New ideas about interpretation and new productions of his stage works have taken their turn with more traditional performances, and in the dance world we’ve already seen new pieces from Christopher Wheeldon, Kim Brandstrup and others. Now it’s Richard Alston’s turn: his devotion to Britten’s music goes back 50 years, and for his programme at the Barbican Theatre he’s made two new works to be shown alongside two from an earlier stage in his career.

First came Lachrymae, from 1994. It’s set to Britten’s orchestration of his own viola-and-piano variations on a song by John Dowland, and  both here and for the rest of the evening we gained immeasurably from having the music played live and onstage and brilliantly by the Britten Sinfonia, directed by Pekka Kuusisto.  For one thing, it was completely appropriate that the orchestra’s constant presence behind the dancers focused more attention than usual on the music; equally, the dancers seemed to draw extra energy and involvement from their close proximity – something they needed  particularly in Lachrymae, which is a melancholy, low-key piece and for me the most problematical of the evening. There are so many layers to it – the poem which inspired it all, then Dowland’s setting of it, then Britten’s reflections on Dowland’s music, and finally Alston’s own contribution – that I find it hard to know where to focus. Dowland’s mood is of unrelieved despair; there’s more variety of feeling and tempo in Britten’s variations, but even so it’s hard for a choreographer to hold our interest. (Originally this piece was the second part of a longer work – I saw it once and wish I could remember if maybe some contrast between the two halves  made the whole piece stronger.)  Though Alston creates some lovely steps, they aren’t enough to satisfy: he doesn’t manage to particularise the dancers’ relationships – we know nobody’s happy but we don’t get enough clues as to why. I love the last section of the music, when Dowland’s theme is played out in full: the last line of the poem is “I was more true to love than love to me” and I wish Alston could have found a clearer choreographic translation of that to end with. But that was my last complaint for the evening.

The first of the new works, Hölderlin Fragments,  was a very pleasant surprise – I couldn’t imagine, beforehand, what Alston would  do with such a densely textured, serious piece.  Clearly it means  a lot to him, both musically and for its personal associations, and he’s dug deeply to find choreographic  equivalents to Hölderlin’s  far from easy verses. The most obvious hit was an exhilarating solo – a sort of scherzo – to the poem called Youth, danced with wit and technical brilliance by Nathan Goodman: that ranks with the best of Alston. It must have been far more difficult to find a parallel to Socrates and Alcibiades – Alston’s own favourite piece from the whole of Britten – in which the philosopher is asked to explain why someone as learned as he gets pleasure from the simple contemplation of beauty: Alston achieves it by the simplest of means. The last two songs – quiet and contemplative, leading to a vision of eternal peace and harmony – are perhaps less successful, but there was throughout a sense that the dancing was explaining the texts rather than just pottering along beside them. And I very much enjoyed the singing of tenor Robin Tritschler – less declamatory than Peter Pears and completely unmannered.

The headline piece of the evening was the première of Alston’s production of Britten’s short cantata Phaedra. I call it a production rather than a ‘dancework’ because that’s how it felt: it’s built round the mezzo soprano who sings the title role – she doesn’t just join in the movement now and then, she’s the centre of it all and drives the choreography as well as the drama and the music. With the wrong singer that approach could lead to disaster, with Allison Cook it worked perfectly. Her own performance was persuasive and as sympathetic as the story allows;    Theseus (James Muller), Hippolytus (Ihsaan de Banya) and Oenone (Nancy Nerantzi), all of them  entirely convincing, had the other solo roles. But it’s the corps/chorus, in their blood-red costumes, I’ll remember the longest: they frame  the drama and Alston moves them with a power and purpose I’ve not often seen from him.

Finally, Illuminations: a restaging by Martin Lawrence of the work previously known as Rumours, Visions. In its earlier form I found it disappointing – lovely to look at, yes, but too quiet and calm to match the brilliance of the score, the story perhaps of Britten and Pears rather than Rimbaud and Verlaine. This time I loved it unreservedly.  Maybe one day someone will make the hot version; meanwhile I’ll take the tenderness and longing and regret. It would probably benefit from stronger characterisation in the central roles but  as it is, it’s quite simply beautiful:  the costumes, the choreography, the music (Robin Tritschler again), the dancing, everything.  Socrates would probably have liked it too.

Barbican Britten: Phaedra is  part of Barbican Britten, a two-week celebration of Britten’s centenary that looks at Britten from a range of perspectives.

Phaedra and Holderlin Fragments are commissioned  by the Barbican. 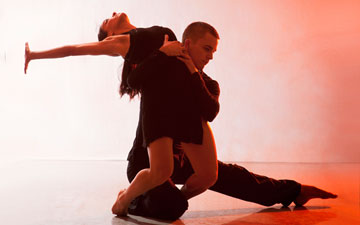 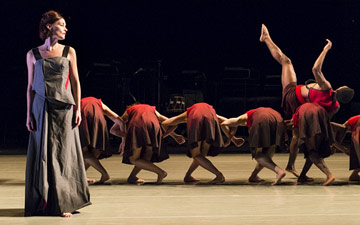