To get the best out of the Stuttgart Ballet’s performance of John Cranko’s The Taming of the Shrew, you need to arrive in a good mood, check your critical faculties into the cloakroom, and just go along with it.  There’s a clearly told story, lots and lots of dancing, a talented cast, attractive costumes, some  good jokes, a happy ending… what more could anyone want?

Well, quite a lot  actually – a better score, for instance, a more logical emotional arc, some genuine feeling, and – above all – a  plot that didn’t leave you frothing with rage and disbelief at its dated, crass attitude to women. What on earth possessed Cranko to choose this story? And what happened to the sureness of touch which earlier in his career had produced Pineapple Poll, one of the most successful comedy ballets in history?

It would be easy just to put the blame on Shakespeare, but at least in the play Katherina can establish herself as intelligent, witty, and angry for a reason. Here, she’s given no background: she’s just very, very cross, and you could be forgiven for thinking she’s motivated by nothing more noble than jealousy of her prettier young sister.  Along comes the dashing Petruchio and after one pas de deux she’s quite clearly fallen for him  and is  ready to walk  off  with him into the sunset, hand in hand – so why, then, all the tantrums at their wedding? It makes nonsense of most of the rest of the ballet.  And so on. The music is dreary, the let’s-play-at-being-disabled antics of Petruchio’s servants are embarrassingly tasteless, and – as in so many multi-act ballets – almost everything goes on too long.

Fortunately, there are some compensating pleasures. Cranko’s handling of the corps de ballet is far more interesting than anything he showed in his  most widely-known piece, Onegin, and I like the designs, too: though if you dozed off for a minute in the last scene you could easily think you’d woken up in the middle of a Romeo and Juliet. But most of the interest has to come from the dancers.

Katherina was Alicia Amatriain, a principal dancer and one of the few in this cast whose name is likely to be known outside the ballet audience. She certainly has the strength of technique and character for the role, but her shrewishness was rather unvaried and didn’t give much help, in the earlier scenes, to anyone  looking for a sympathetic side to her.  Alexander Jones as Petruchio swaggered with enthusiasm and also seems technically very strong : the problem was that he fell out of character almost every time he started to dance. And of course, like anyone taking this role today, he ‘s dancing in the shadow of the unforgettably charismatic Richard Cragun – as near to an impossible act to follow as any I can think of in the ballet world.

Elisa Badenes danced Katharina’s sister, Bianca – again, her dancing was fine but she needs to find some way of building a  more three-dimensional character. I thought her comic suitor, Gremio, was nicely done by Ozkan Ayik – funny without going too far over the top – and David Moore’s Lucentio was pleasingly straightforward and open. Angelina Zuccarini and Rachele Buriassi had fun as the two whores who end up successfully married, and Rolando D’Alesio as Katherina’s father made something impressive out of a fairly minor role.

So the company showed well enough to save the afternoon – but how much better they would look in a stronger piece. 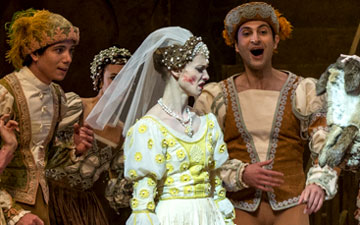 Gallery – Stuttgart Ballet in The Taming of the Shrew 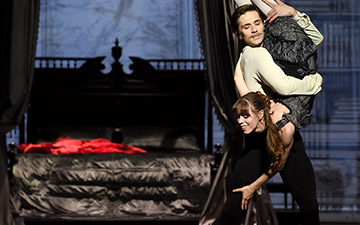 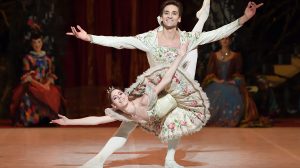 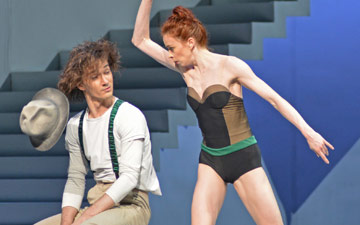 Bolshoi Ballet – The Taming of the Shrew – London