Nature-based sets seem to be the thing at Sadler’s Wells this month – the moment Pina’s turf has been rolled off the stage, Taiwan’s Cloud Gate Dance Theatre move their lotus pond into the orchestra stalls. I’m half expecting to walk in next week and find a pine copse sprouting in the aisles.

Cloud Gate’s lotuses set the scene for a lengthy work which is meditative, poetic and often beautiful to look at. Set to a cycle of Chinese poems written by Qu Yuan and a range of music including sonorous temple bells, guttural chanting and bursts of percussion, Nine Songs lopes between the vigorous, the mesmerising, and the downright mystifying.

The opening sequence is striking: a monastic circle of cross-legged, white-clad dancers  surround soloist Huang Pei-hua. Those in the circle each hold a whiplike branch; in wordless unison they beat frantic rhythms on the floor, whipping the scarlet-robed Huang into a frenzy of splayed limbs and stuttering spins. A masked god balances with supernatural ease on the shoulders of two men, stepping from body to body and balancing on one leg as if gravity is of no concern at all. A woman is veiled in long, flowing sheets of diaphanous white; a gentleman wearing only the briefest of undergarments dances a powerfully physical solo that is as much a celebration of his own – very visible – backside as it is of anything sacred.

The delights and pressures of modern life erupt repeatedly into these scenes of ancient ritual. Suited salarymen carry briefcases across the forestage; cyclists whizz through the action; a flag-waving rollerblader skates behind a deity, and the image is so incongruous that the audience erupts into surprised giggles. Towards the end of Nine Songs these same images become more sinister, the cyclists fleeing some unseen danger, the bodies pile up onstage as if shot.

Other images are not so easy to grasp. Dancers emerge from the wings, walking across the stage in measured paces with upturned baskets on their heads. Others thrash about wearing wicker structures that put one in mind of Edward Woodward’s finest hour. The chanting at times feels oppressive – perhaps by design, but it’s hard to tell without a decent grounding in Tibetan. There are long moments that are, for a Western audience at least, quite simply baffling.

It is the final sequence – a long, leisurely arrangement of candles placed by the cast in remembrance of fallen ancestors that gradually forms the shape of a river winding across stage towards the audience – that lingers longest in the mind. As the flames flicker gently behind their lotus pond, an atmosphere of calm serenity descends over the whole of Sadler’s Wells, and after some of the peculiarity of the middle of the show, it’s a serenity much to be desired.

Bringing together ancient themes and modern presentation, visually striking and gorgeously danced, Nine Songs is a meditation that sometimes slips beyond comprehension; but if you can get into the zone while watching, there’s a peaceful joy to its poetic mysteries. 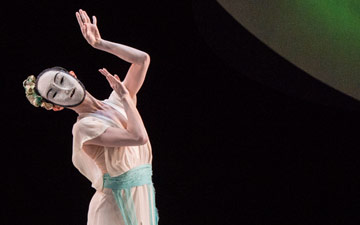 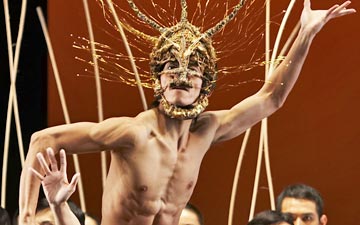 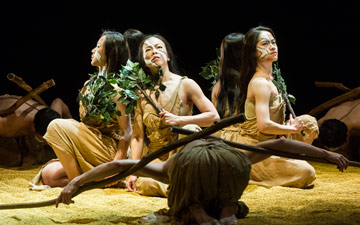