Alain Platel was inspired to make this work by the life of an elderly Brazilian woman named Estamira. Suffering from schizophrenia, yet charismatic and philosophical, she lived on a municipal rubbish dump on the outskirts of Rio de Janeiro and was the subject of a documentary, made a decade ago by Brazilian film-maker, Marcos Prado. To be frank, I wouldn’t have known any of that had I not read it in the programme. Instead, in my head, the work was inspired by my Uncle Reg (and for those not familiar with this old-fashioned English name it is pronounced Redge and is short for Reginald).

Reg was in the rag trade, owning a warehouse in Yorkshire that recycled – although I don’t think they used that word, back then in the early 60s – old clothes. I have pleasant memories of visits in my infancy to said establishment where my cousins and I would jump into vats of clothing, many years before health & safety will have undoubtedly turned this into an impossible enjoyment. We would burrow under the garments to play the best-ever game of that other H&S (hide & seek). Nowadays, in every IKEA there is a little transparent room full of colourful balls that kids can dive in and tunnel through. In my day, you had to make your own fun and Uncle Reg’s clothes mountain was as good as it got.

The reason for these rather incongruous reminiscences is that Platel’s own set design portrays Estamira’s garbage mountain as piles of clothes, hundreds – perhaps even thousands – of items covering the Sadler’s Wells stage, which six performers dived into and hid under. There were no flies in Reg’s warehouse (I was only five at the time and so I concede that it could have been a lock-up garage that seemed like a warehouse to me). And this should have been the first hint that the action was taking place on a rotting garbage mountain in Brasil and not a nice comfy, indoors hillock of rayon in Batley, since the heavily amplified sound of buzzing bluebottles was the first – and a relatively constant – sound in tauberbach. The title, by the way, means something like “deaf Bach” and a good deal of the background music was recorded Bach, either played straight or performed by a deaf choir (known as the Tauber Bach choir). This soundscape was also punctuated by quotations from the Estamira documentary, although the music was largely anonymous throughout the piece.

There is much more than a passing similarity between tauberbach and the tanztheater work of Pina Bausch, which we can see in the stark simplicity of the set design being dominated by a single, overwhelming influence (the carnations of Nelken, the breeze blocks of Palermo Palermo and the meadowland hillside of Wiesenland being substituted by the clothes mountain of tauberbach); and in the strident domination of the action by a gravelly-voiced actress (for Tanztheater Wuppertal’s Mechthild Grossmann, read Elsie de Brauw, who not only portrays Estamira but apparently brought the whole project to Platel’s attention). Red-head de Brauw was central to everything and the main vocal performer, enjoying an ongoing dialogue with a recorded male voice (the thoughts in her head?).

While I have some reservations about the confused impact of the dramaturgy, especially insofar as my need to read about the work in order to understand its intentions, I have nothing but praise for the performances, which included several stand-out, astonishing sequences. These included an extraordinary long section in which Ross McCormack (a kiwi last seen here in Lucy Guerin’s Untrained) fast forwarded and rewound his actions in accelerated and slowed-down motion. It’s not innovative but McCormack has mastered the technique superbly: he even seems to bounce off the clothes in super-slow motion.

Romeu Runa is another arresting performer who unleashed a striking solo, apparently with the capacity to turn into animated sub-human characters of outrageous, curvaceous flexibility. He managed to look like Wile E Coyote, of The Road Runner fame, an Egyptian hieroglyphic and a mad, March hare, pretty much all simultaneously. The ensemble was completed by Bérengère Bodin, a long-limbed brunette dancer-come-gymnast; an ebullient blonde, Lisi Estaras (now a 15-year veteran with C de la B); and Elie Tass, recently remembered from Sidi Larbi Cherkaoui’s Puz/zle whose bald head and thick dark beard added a visual accent to the psychological haze underlying the work.

Having oodles of spare clothes lying about inevitably led to a certain amount of kit-changing, which involved fleeting moments of nudity, tastefully achieved. There was also much diving from heights into the mounds of soft material and each performer disappeared from sight from time to time, not out into the wings but remaining on stage under the clothes. The work seemed to last longer than the anticipated 90 minutes (straight through) and it would be wrong not to acknowledge that there were periods of “dead” time .

I suspect that my late Uncle Reg would have been thoroughly bemused by the whole thing (a regular outing to the latest cabaret at the Batley Variety Club was his cup of tea) but I thank Alain Platel and his creative team not only for some remarkable moments of dance theatre but also for stirring up welcome childhood memories. Even if my images were a whole continent away from Estamira’s rubbish tip in Rio! 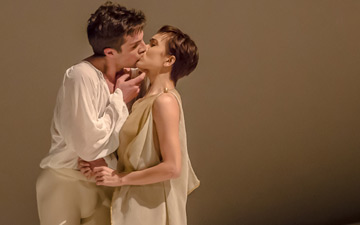