The Royal Ballet: All That is Solid Melts Into Air
Alexander Whitley Dance Company: The Measures Taken
London, Linbury Studio Theatre
15 May 2014
Gallery of pictures by Foteini Christofilopoulou
alexanderwhitley.com
www.roh.org.uk

This double bill at the Linbury is from Royal Ballet Choreographic Affiliate Alexander Whitley. He is a former dancer with Birmingham Royal Ballet (BRB), who moved to Rambert and into the broader world of contemporary dance. He has now moved into choreography, including a well received recent commission for BRB as part of the Birmingham Internal Dance Festival.

This programme shows the variety of his influences and interests. All That is Solid Melts into Air is set on three dancers from the Royal Ballet and uses the conventional vocabulary of ballet, albeit with some odd twists and inflections. The Measures Taken is performed by the five dancers of his own company and is a contemporary work, with a very different feel to its language, much more pulled down into the floor than the airier feel of the first work. The Measures Taken is a collaboration with the wonderfully-named Marshmallow Laser Feast – digital artists – and as much a light installation as a work of dance. It’s a longer work, perhaps too long, and maybe the disparate elements do not perfectly cohere. But this is a really enterprising and unusual use of the Linbury space that leaves you with an intense curiosity to see what Whitley does next.

All that is Solid was developed for the Royal Ballet’s Draft Works programme in 2013. The music is by Daniel Bjarneson, part recorded and part played live on stage by cellist Peter Gregson. It is danced by Marcelino Sambé, Eric Underwood and Melissa Hamilton of the Royal Ballet.

Typically these Draft Works pieces were staged very simply. But here we have designs by Jean Marc Puissant whose red velvet curtain at the back suggests we are somewhere backstage. He dresses the three dancers as distinctive characters: Hamilton in tutu and elaborate headdress, Sambé in a large ruff and Underwood in a curious, rather 18th century, pigtail.

It opens with a solo for Sambé in which the stage doesn’t look quite big enough for his appetite for space. Hamilton enters with a remote icy demeanour, quite unimpressed by Sambé‘s larking about. She is partnered by Eric Underwood. There is freshness about Whitley’s use of classical steps, a vocabulary he seems to enjoy but is still ready to subvert at moments with more unorthodox moves: Hamilton appeared to dive between her partner’s legs and grab the back of his knees for example. The piece could be taken as a deconstructed reading of Petroushka with Sambé failing to win the Ballerina from Underwood. It was crisp and inventive and didn’t outstay its welcome, managing to suggest and imply a lot in its brief running time.

Whitley seemed to turn into quite a different choreographer in The Measures Taken. We should applaud its undoubted ambition in trying to integrate dance with complex lighting and visual projections. Sometimes the balance between the elements didn’t seem optimal and the dancers appeared sidelined by the effects, but there were moments when the two did come together in a very satisfying way. Music here is recorded, by Rutger Zudervelt.

It begins slowly as two tight beams of light slowly shift downwards and appear to push the cast down onto the floor. Marshmallow Laser Feast have supplied nets of light in narrow bars across the stage which contain the dancers. When the shaft is broken it casts intense bursts of white light on their bodies. Other effects seemed like a falling rain of light pebbles.

Later in the work a scrim descends, through which we can still see the dancers. This is illuminated by projections. Initially these seem entirely abstract bars but as they multiply seemed to be suggesting the moving planes of a dancer’s body, shifting in response to, or in imitation of, the actual dancers moving below.

The work is a little too long at 45 minutes and could profit from editing. There seemed to be a series of false endings. The dance itself might not stand up so well on its own without its lighting, but this is intended as a unified work and as such it is unusual, ambitious and refreshing. Very striking images linger in the memory. 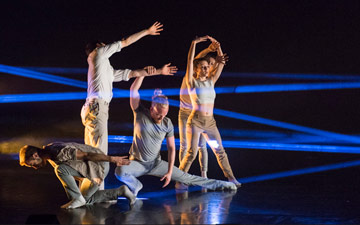 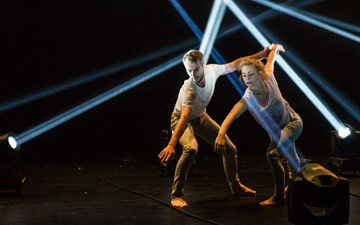 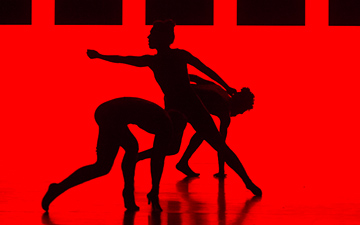 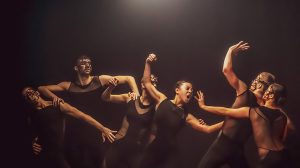 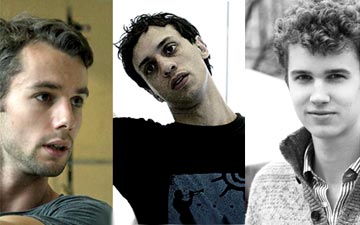