Andris Liepa states that he has restored 11 creations originally performed by Diaghilev’s Ballets Russes outside Russia early in the twentieth century. He has done so via the charitable foundation set up in memory of his famous father, Maris Liepa, mounting productions on different companies.

The first company to stage Andris Liepa’s revivals of Fokine ballets in the 1990s was the Kirov, now the Mariinsky. Fokine’s granddaughter, Isabelle (who controls his estate) was closely involved, insisting that the versions she and Liepa produced were closer to the originals than any in the West. Her claims were met with a mixture of interest and scepticism.

Isabelle’s name is not mentioned in the programme for the Fokine triple bill performed at the Coliseum by the Natalia Sats Music Theatre for Young Audiences. Two of the ballets, Chopiniana (Les Sylphides) and the Polovtsian Dances from Borodin’s opera Prince Igor, have been performed in Russia for over a century. Fokine’s Petrushka, once familiar to British audiences in productions by Festival Ballet (now English National Ballet), the Royal Ballet and Birmingham Royal Ballet, is relatively new to Russia, reintroduced by Liepa, who used to dance the title role himself.

The Natalia Sats musicians, chorus and dancers performed his production of Petrushka for their company with infectious enthusiasm. They have a treasure of a musical director and conductor in Alevtina Ioffe, who brings Stravinsky’s music vividly alive. Sets and costumes, attributed to Alexandre Benois, could have been drawn from any of his many redesigns for the ballet, reinterpreted by Anatoly Nezhnyi and Anna Nezhnaya. The choreography was re-imagined to include the kind of virtuoso steps Fokine objected to in his manifesto against balletic inauthenticity. This was hardly his vision of traditional Butter Fair festivities.

Pavel Okunev as Petrushka flung himself too impressively into the air for a puppet stuffed with straw. Small and floppy-limbed, he made a plausibly pathetic contrast to towering Dmitry Kruglov’s caricature of a Moor. Okunev wasn’t helped by poor lighting effects for Petrushka’s spine-chilling final moments. Revellers at the fair were over-keen to show off, charged with high spirits (including vodka) and sexual energy. Briefly visible, the persecuted little bear who shambled through could have been another incarnation of Petrushka.

The triumph of the triple bill was the rip-roaring account of the Polovtsian Dances, with the choir exulting from boxes at the side of the Coliseum stage. The company’s luscious soprano, Elena Chesnokova, was onstage with other captive Polovtsian lovelies at the start, before hordes of warriors took over, led by indefatigable Pavel Okunev. Just how ‘authentic’ the choreography might be, compared with Festival Ballet or Royal Ballet versions (often embarrassing), is open to doubt, like the gaudily glittering cosumes, but the performance was thunderous fun.

Purists’ objections to Liepa’s recreations of Diaghilev-era ballets as travesties are justified when they are crassly performed. Happily, this exceptional company of singers, dancers and musicans, committed to entertaining young audiences, give such life to the productions that they deserve to be seen and enjoyed – which is more than can be said about some limp revivals in the West. 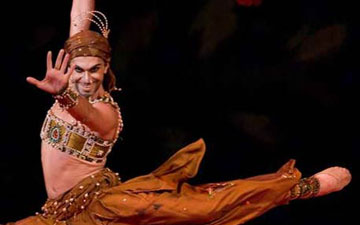 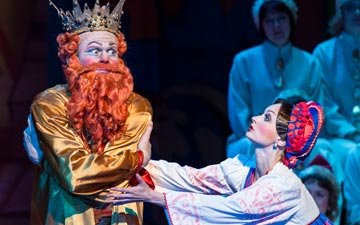 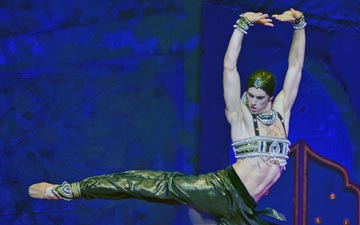