These dudes are clearly the surfers of the ice skating world; athletes who are creating a new freestyle version of their discipline (Patin Libre means free skate); they are like the skiers who transformed the downhill and the slalom into the twists, tricks and triple pikes of freestyle snowboarding. The guys sport long hair and carefully cultivated beards, and they wear an assortment of loose shirts, beanie hats and baggy pants that wouldn’t look out of place on a beach. This Montreal-based collective of medal-winning skaters has shunned the comparatively lucrative, sequined world of the Disney and ballet-themed ice dance spectaculars touring the big arenas, to develop their own unique interpretation of what dance on ice should be.

Their 90-minute show is split into two halves, beginning with a fairly conventional series of routines, viewed by a small audience occupying one cordoned-off area of the ice rink’s spectator seating. After an interval, the audience returns to be seated in a small makeshift stand erected on matting laid above the ice at one end of the rink. Feeling the crunch of the ice underfoot as we made our way to these seats was an integral part of a very special experience (certainly unique in my dance writing career).

I know little about the technique of skating (other than that it is an exceedingly difficult and often painful discipline to master). But, an arabesque is an arabesque on whatever surface it is performed and I can count the number of airborne rotations in a jump (the mechanics of which are no different from skating to ballet) but I can’t differentiate a Lutz from a Salchow (its all to do with the use of different skate edges in take off and landing). Much of the appeal of competitive ice skating comes from the beauty, grandeur and athleticism of a well-executed jump and I can tell you that Le Patin Libre take the arresting impact of this skill to new heights (literally) when a guy appears from out of the darkness to launch a massive, double rotation leap into the light, just a few feet in front of you, before gliding off again into the gloom! I imagine Ivan Vasiliev on roller skates might have a similar impact!

Each of the five dancers (four guys and a girl) gets a chance to shine in their own very different routines: Alexandre Hamel has a gift for jumping and a comical ability to remain perfectly balanced even when his legs are bent at the oddest of angles; Pascale Jodoin is a spinner, revolving with such speed and force that it seems she must drill down through the ice; long-haired Taylor Dilley retained a statuesque dignity while weaving and gliding around the rink; and the extraordinarily tall, dreadlocked Samory Ba performed a toe-picking solo on the front and back edges of his skates. Incidentally – and accepting that I am no expert – it looked to me as if the skates being worn by the group were more like those used in speed skating than in competitive figure skating.

The impression of speed is a major theme in the second half, especially when the performers are accelerating full-pelt towards the audience either bringing themselves to a halt just in front of the temporary seating or gliding away to the sides at the last second. Sitting at the front, the first time, it seems that there is no way that they can avoid a crash! Lucy Carter’s lighting changes, which are far less evident in the first act, are a crucial ingredient to enjoying the more intimate arrangement following the interval. The enjoyment of the opening half was partly offset by the fact that it was viewed through the plastic screens at the edge of the rink; in contrast, the impact of the scything of blades through the ice was made all the more exciting by being close enough to get wet! One of the skaters, Jasmin Boivin, also composed the score for Vertical Influences, his music always effectively accentuated by the timbre of skates slicing through the ice.

There is a snippet of film on YouTube in which Dilley (the only native English speaker in the group) explains his prior life as a skater in a cruise ship show and as an ice skating dance partner. This reminded me of the post-competition careers of some of his peers who train celebrities as their partners on a TV show that makes the claim to be Dancing on Ice. Here in “Ally Pally’s” rink, although we could feel the cool of the ice all around us, that is where any similarity ends. There are no spangles or cheesy costumes in Le Patin Libre. The intimate informality of the whole event is exemplified by the five ice dancers personally thanking the audience as they leave. Their pared-down show emphasises that less is more, concentrating on the simple brilliance of expert skaters spinning, jumping and gliding across frozen water. You could say that this experimental show provides a minimalist holiday from Holiday on Ice. It is certainly a new and exciting way to bring the 36th annual iteration of the London Dance Umbrella festival to a graceful close, just like those speeding skates scything to an emphatic full stop. 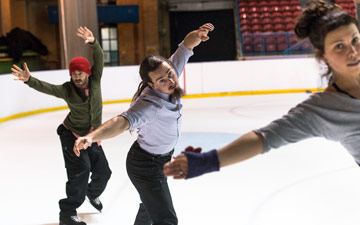 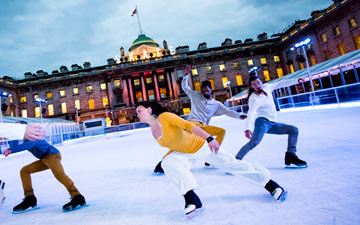 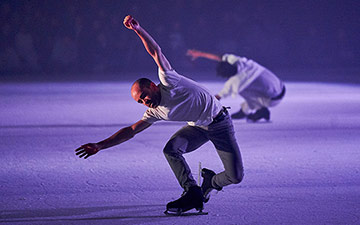