This bill at The Place features four works from the London Contemporary Dance School’s postgraduate department: a current MA project, an unfinished piece from EDge (LCDS’s postgrad company) and two works by alumni.

Bridget Lappin’s Lill is up first. Her programme notes don’t reveal anything about her motives for the piece, a solo she performs herself, but they do leave us with this quote from the philosopher Maurice Merleau-Ponty: “To perceive is to render oneself present to something through the body.”

Lappin spends much of her 14-minute work in stationary or near-stationary positions. She’s clearly comfortable with making her audience uncomfortable: she inspired quite a few titters and nervous coughs during her opening, in which she stands fixed at stage right for around a minute before starting to move, and these resumed during a long segment at the end where she sits on the floor, facing the back wall. When Lappin does get moving, it’s mostly to twist herself into tai chi-style shapes. Her composure is commendable: she frequently balances on one foot, arms reaching into the sky – one of many poses in which her limbs stretch but her core remains still. There’s a swift phrase in the middle of her piece where she abandons this measured approach, jerking as if she has invisible ropes tugging at her limbs, but she’s never far from a quiet moment. Fortunately, she brings enough energy to keep such moments alive. It’s slow-moving but never boring.

The evening’s work in progress comes from Robert Clark, of EDge. Rather than simply presenting an incomplete piece, Clark comes to the stage and engages his 12 dancers in several exercises he tells us will help him finish his work, a self-professed “exploration of questions like ‘How does one project meaning?’ and ‘What is the relationship between meaning and truth?’” These exercises are based on old psychometrics like the Likert scale and Rorschach test. Clark calls out statements like ‘I believe in true love’ and directs the dancers to move towards the part of the stage that aligns with their response (stage right is 100% agree, stage left 100% disagree); he has them move through a few choreographed tableaux and solicits the audience’s thoughts on what the shapes resemble; he assigns themes like ‘hands’ and ‘negative space’ to small groups and asks each to improvise a phrase.

The constant interruptions to the movement are a little tiresome, but the dancers involved show a lot of technical expertise between them, particularly in the improv segment, where they can focus on their individual strengths. One dancer repeatedly took to precarious balancing feats, while others focused on extensions, angles and weight transfers. Clark’s light-hearted tone keeps the proceedings from becoming too self-important, although I suspect he regretted his blitheness somewhat on opening night when a few tipsy members of the primarily student-populated audience hijacked the tableaux exercise, battling for attention with silly answers like “fake beard” and “badly executed 90s music video.”

The second half of the programme starts with a three-minute video by Jessica Wright of Random Dance and Morgann Runacre-Temple, Ballet Ireland’s choreographer-in-residence. The piece, which recently screened on Channel 4, is a Walter Mitty-style daydream about a music audition gone berserk. I could have done without the beer commercial air (egged on by the frantic maracas and dudes-on-a-mission set-up), but it’s a fun watch nevertheless. The four male dancers are suitably coltish for the playful tone, and there’s some nice camera-work, including experiments with tempo and one special effect that sees a cape shimmy like a charmed snake. The human dancing, meanwhile, could stand to be a little more pronounced, but you’re never left wondering why it’s on film instead of performed live.

Upturn concludes with a 16-minute solo choreographed by Joanna Young and performed by Kirsty Arnold. Army of Me is a robust piece, with well-thought-out costuming, music and lighting. The latter is particularly impressive: a clever arrangement of soft lights projects four shadows of Arnold’s form onto the backdrop. These ‘selves’ flex and unfold in tandem with Young, calling to mind a variation in Exzeb’s Artism: Act II, also shown at The Place this year, in which a dancer duets with a digitised avatar of himself. Unlike with Artism, however, Arnold’s doubles project a spectral vibe rather than a technical one. She focuses her movement on slow-moving shapes, and her control is excellent as she forms full-body curves and contractions.

Like each of the pieces in Upturn, there’s a strong whiff of ‘experimental student’ here, but there’s also a good bit of talent on display. 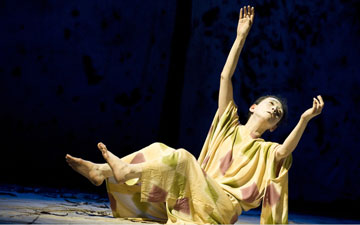 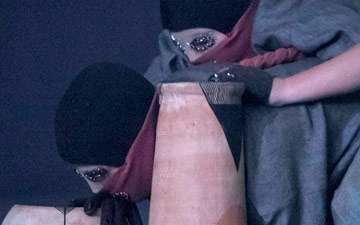 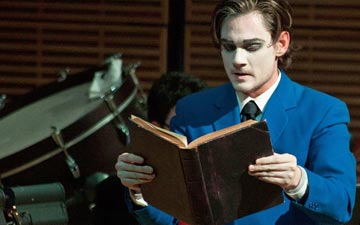