Performer and choreographer Margrét Sara Guðjónsdóttir is a new face in London, but not in her native Iceland where she has made work for theatre and outdoor spaces since 2004. Since 2007 her work has toured internationally, and this year her work Step right to it is supported by the Aerowaves touring initiative. Earlier this year, Guðjónsdóttir was commissioned by Sweden’s prestigious Culberg Ballet. All this makes the third presentation in Sadler’s Northern Light season a rather frustrating evening, then, because none of the above explains how Variations on Closer comes to be such a naïve, sophomoric and at times frankly dull piece of work.

The concept is simple: three dancers enter the stage in turn and perform sequences of minimal movement, stepping or crawling across the stage in slow motion. Laura Siegmund brings a robotic, android-like quality to her repeating movements, sometimes jittering or malfunctioning for an instant; Angela Schubot throws in moments of anti-ballet – pliés that don’t descend, and cloches with the foot flully flexed; and Marie Ursin Erichsen, resplendent in her fuschia underwear, seems to have got lost on the way to a gentlemen’s club somewhere in Soho. All three fix the audience with unwavering stares as they move, suggesting an inversion of the usual relationship between performer and audience.

There is always a place in dance theatre for the minimal, the gestural, the austere. There is always a place for the academic, for the challenging, for the downright difficult. I’ve seen enough walkouts from performances by dancemakers I admire to know that one person’s thrilling dissection of the nature of performance and performance-making is another person’s mindnumbing aberration; there’s room on the London stage for all manner of art. But at the base of Guðjónsdóttir’s piece is an overwhelming lack of curiosity, a failure to scratch beneath the surface of a potentially interesting topic.

Siegmund, with her cold, mechanical stare probably makes the best fist of the performance overall; she has an unnerving ability to make her unending gaze appear Terminator-like, as if she’s calculating the most efficient way to take out the audience. She’s also the most capable mover, infusing supple limbs with a convincingly machine-like quality. Confrontational anti-performance paradoxically requires skilled performers; Siegmund fares reasonably well but Schubot and Erichsen are simply not strong enough technically or dramatically to carry off the deliberately unvirtuoisic material.

Towards the end of the piece a scarlet curtain abruptly descends from the rig, no doubt symbolising the constructed nature of performance and our role as audience or some such. I must confess to having entirely lost interest by this point. Minimalist performance, well-executed, can be a thing of provocative delight; but there’s simply nothing of inherent interest in Guðjónsdóttir’s material, or in the way it’s danced. A difficult watch, but not in the good way. 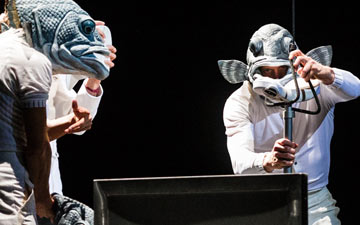