A circle of light on stage demarcates the performance area for Torobaka, a new work jointly created by dancers Akram Khan and Israel Galván. It could be a bullring, or wresting ring, a venue for combat. Is this to be a contest between two master practitioners of different dance styles? Certainly it encourages that expectation.

Akram Khan works in both kathak and contemporary styles and has a history of collaboration with other dancers and dance makers, absorbing different influences. Galván is known for his questing intelligence and his urge to push the boundaries of the flamenco form for which he is celebrated. However this type of collaboration and co-creation is a newer experience for him.

But though both dancers take their solo turns in the centre, what comes across here is not so much a struggle for dominance as a negotiation, though sometimes perhaps a robust one. It’s funnier and more playful than you might have expected, with both artists energised and invigorated by the other. Both of these performers are really at the top of their game. It’s an intense experience, 70 minutes without interval, but the flow of invention doesn’t cease.

The musical forces supporting them are an amalgam of their different traditions. There are three singers and two percussionists, all dressed in black. The singers (Christine Leboutte, David Azura, Bobote) sound more from the flamenco tradition, the drummer and percussionist (Bernhard Schimpelsberger and B C Manjunath) bring in Indian influences. Flamenco itself is thought to derive from gypsies who left India centuries ago, and the blending of musical heritages and their intricate time signatures is successful. The musicians get their chance at a few solo songs and the interplay of the voices is haunting.

Khan and Galván appear for their opening duet both in bare feet. Khan is clad in his customary long black tunic over trousers, Galván in a shorter and shorter-sleeved version. Side by side, even when performing the same gestures, the contrast between them is interesting. Although the two are similar in height, the same gesture of an arm can register as more angular on the lean Galván, more rounded on Khan. His arms are more flowing, Galván’s more forceful even while keeping time with each other.

The sound of their feet against the floor is also distinct. Khan’s have more of a brushing, slapping quality, Galván’s more of a harsher stomp. This first section shows them exchanging gestures, trying out each other’s moves, leaning into one another’s space. There is a key gesture, repeated at different points, where one or the other leans forward and puts his hand across the other’s mouth. Perhaps it’s a sign that all they need to do is shut up and dance and all will be fine.

Galván returns for a solo, now in his familiar shoes. He really is an astonishing performer. The speed of the footwork and the whipping turns is extraordinary, and he appears possessed by the beat, pounding out sounds on his own thighs or anything else that’s handy. At one point, while Khan is engaged on his own solo, Galván pounds out a counterpoint to with his feet while standing on the seat of a chair. Both observe and are observed by the other.

Khan’s initial turn in the spotlight rather is a mischievous solo which he dances with shoes on his hands (are they flamenco heels ?) in perhaps a rather ironic commentary on his ability to perform Galván’s steps. Later in the work he dons his kathak bells on his ankles to add to the musical mix, and whirls across the stage in a seamless flow of movement, at blurring speed. The solo moments are striking but it’s still possible to wish there were a few more moments where the two of them are on stage together striking sparks.

Brighter lights are added around the circumference of the ring until at the conclusion the entire edge is illuminated and the circle and cycle is complete. Khan and Galván, eyes locked, stand poised at either side of the circle with one foot on its edge as if ready to enter again for the next round. It’s a riveting match. 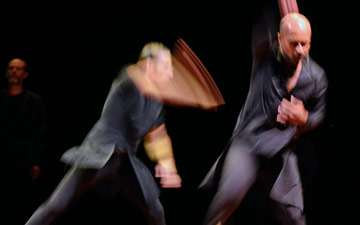 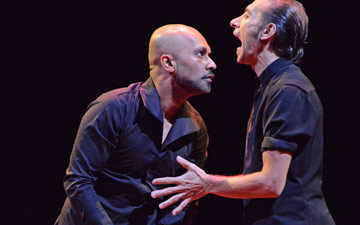 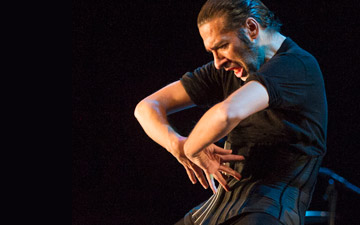 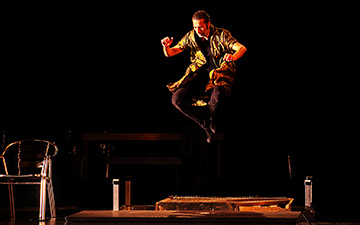 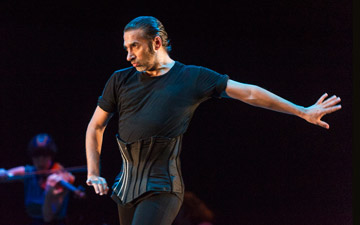