Company Chameleon take a long hard look at what it means today to be a man (or maybe that should be what it means to be a bloke) in Beauty Of The Beast. The work is choreographed by Anthony Missen, co-Artistic Director of the company, and features six male dancers and their interaction and bonding as a group.  In a tightly-packed 75 minutes we have aggression, tension, tussles for dominance, teasing, needling and yet also uncertainty, a yearning to belong and vulnerability. It all cracks along to an eclectic and loud soundtrack, from Bach to thundering bass lines.  The lighting from Yaron Abulafia is outstanding, making something endlessly changeable and atmospheric out of a bare stage.

It begins formally with three men in tights, bare-chested.  But even here there’s a certain lack of convention in terms of the presence of chest hair.  Then out of the shadows saunter the rest of the cast, in street clothes.  If you did see this bunch on a dark night, it might well occur to you that you’d be better off on the other side of the street. But our guys want to join in, to be part of the group, wear the same clothes, go along with the herd.

One of the group is obviously the leader who is there to assert his authority and keep them all in line, though it’s a constant struggle. The group dynamics are complex, with pecking orders always being tested and subtly shifting. The performance is occasionally punctuated by speech. It’s not that Missen doesn’t trust dance on its own to do the task he is after, but it does usefully break the tension at moments.  The dance itself is ferociously athletic, with the men flinging themselves across the floor, rolling and tumbling. Sometimes they drag each other as if they were wounded soldiers.

There’s a particularly effective episode where one guy manipulates two others as if they were his dogs. These, pit bulls one assumes, act as if on short leashes, slavering and bounding about, growling at the front row, and are jerked and tugged back in an assertion of dominance by their owner.

The six dancers are uniformly excellent. They include Missen himself plus Eryk Brahamania, Lee Clayden, Thomasin Gulgec, Theo Fapohunda and Daniel Phung. All establish themselves as individuals with their own little quirks and their own place in the scheme of things. Underneath all the bravado there is a neediness and desperation which peeps through at different times.

At the conclusion, the ferocious dog handler himself now becomes excluded. He is handed new clothes, shedding his street gear for a suit.   Maybe he has grown up and left it all behind, or perhaps in the relentless competition he has finally lost out.  Either way, it looks bleak.

This was a very well-judged work, just long enough to get its point over. It roars with confident testosterone but shows us the fears and uncertainties that whisper underneath. 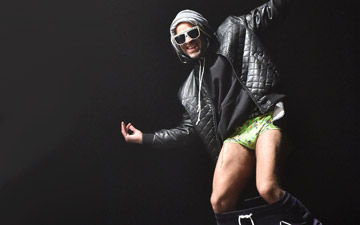 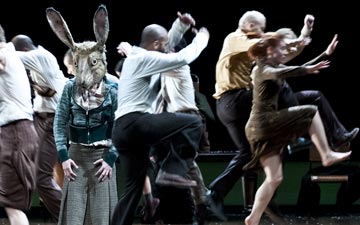