James Cousins Company
Without Stars, There We Have Been
London, The Place
21 November 2014
www.jamescousinscompany.com
www.theplace.org.uk

This two-part bill, my first introduction to James Cousins’ work, could hardly have left me with a more positive impression of the young choreographer, a Work Place Artist at The Place and head of James Cousins Company. The choreography on hand is complex yet organic, the sentiment sincere without seeming saccharine. Both pieces place a premium on scenic effects, but neither trades on flashy tricks; instead it’s simple stagecraft all the way – a refreshing tactic in a time when digital is all the rage.

Without Stars and There We Have Been both take inspiration from Haruki Murakami’s 1987 novel Norwegian Wood, in which a young man named Kizuki takes his own life, and his best friend Toru and girlfriend Naoko struggle to cope with their loss, eventually seeking solace in one another. Cousins created the latter piece in 2012 after winning the inaugural New Adventures Choreographer Award, while the former premiered in September this year. As they share the same source material and choreographic brushstroke, the pieces are natural companions, though it’s worth noting that each has its own themes and could easily function as a standalone work.

Without Stars is angled from Toru’s (Gareth Mole) point of view, and depicts his grief following the death of Kizuki (Georges Hann) and the relationships he develops to cope with it. These include an untenable one with Naoko (Chihiro Kawasaki) and a more promising one with a male friend (Albert Garcia). One of the piece’s biggest strengths is the impressionistic portrait it paints of Toru’s struggle: instead of a linear narrative that spells out his feelings as it chugs along, the work presents a flock of stirring scenes that speak to broad themes like love, loss and guilt. Some moments can be taken literally, like when Toru and Naoko share a panicked embrace after learning of their bereavement; others are illusory, like the spectre of Kizuki lurking in the shadows as Naoko sobs at his grave.

The piece is greatly emotive, a quality helped along by the balletic undertone of Cousins’ choreography. The dancers’ interactions are graceful and intimate: they fold each other into vulnerable shapes and then cradle one other delicately. Even when the tempo accelerates and the dancing becomes more rugged – think darting, diving, falling – it maintains a distinct elegance, one that registers as tender rather than aloof. Just when the choreography draws you in, the music and lighting step in to push you away: quiet, low-lit moments are regularly followed up with blinding rays and blasts of mournful music.

The performers do an excellent job of capturing the complex emotions plaguing their characters. Mole is especially articulate in his body language, and his interactions with Garcia, who has a beautifully expressive face, are among the show’s best: their final duet is a sleek, evocative, brawny display of affection and hope. Meanwhile, Hann brings depth to his peripheral role, and Kawasaki is compelling in her prominent one. Her character is the only one tasked with theatrics like crying and shaking, and she handles the tears without a hint of melodrama.

At 17 minutes long, There We Have Been is only a third of the length of Without Stars, though it’s layered enough to feel just as meaty. Here Kawasaki and Hann intertwine for an ethereal duet in which the former never touches the ground. It’s unclear whether the scene depicts a look back on Naoko and Kizuki’s relationship before the latter’s death or their imagined reunion in the afterlife; either way the mood is serene, the light soft. Hann offers rock-solid support, piloting Kawasaki through all manner of positions, but she works just as hard, deftly hoisting up her own weight. The simple amber lighting and steady score put the dancing front and centre, where it remains throughout, bar a trick of light at the beginning and end in which Kawasaki hovers upstage, apparently floating on her own.

For a piece that largely occurs in place, There We Have Been is remarkably dynamic. Cousins appears to have mined every possible position between the two dancers: Kawasaki crouches on Hann’s shoulders, stands on his thighs, lies across his knees, wraps herself around his torso. Hann lowers the two of them to the floor on several occasions, and still Kawasaki remains airborne. Many of the lifts are precarious, but the pair works through them seamlessly, though not effortlessly. Indeed, part of the beauty of this piece and Without Stars alike is the physical exertion on display. Both have scenic effects that add an otherworldly sheen, but watching the dancers sweat and pant very much brings things back down to earth.

James Cousins Company – Without Stars, There We have Been – London 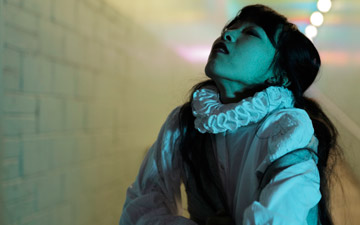 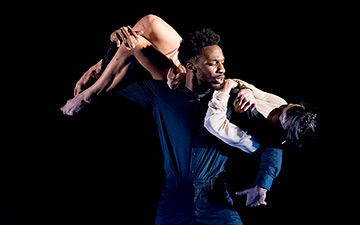