You know that Christmas is really on its way when you see your first Nutcracker. And for me, it has to be a traditional one, from its classical dancing and scenario to brightly varied costumes and characters. Despite a few quirky moments, English National Ballet’s production at the London Coliseum fits the bill with jolly and joyful dancing, and sets the festive season cheerily on its way.

This production, created in 2010 by former director Wayne Eagling, with sets by Peter Farmer, is truly a family spectacular. With all its fun and games, along with its serious ballet, it’s a Nutcracker that will appeal to all ages. As the overture plays, Eagling has inserted a cameo scene showing Clara and her older sister Louise dressing for the party in her small bedroom, while naughty brother Freddie sets off a clockwork mouse to scare them. Sereina Mowlem, (a student at Tring Park School for the Performing Arts) presented a sensitive young Clara, eager to please her parents and be polite to the guests, but not too young to feel the first flutter of her heartstrings on meeting Drosselmeyer’s nephew, (Alejandro Virelles). She danced with lightness and understanding, and brought her role to life (I wonder how many little girls in the audience are now dreaming of, one day, getting the opportunity to take on the role).

When the main curtains part, Farmer paints a lovely Christmas card picture with snow falling gently on snowball fighters, while skaters whizz along on a frozen ‘river’ as bundled guests arrive for the party. The scene then opens onto the large baronial drawing room where everyone gathers to drink and dance. Here doddery old Grandmother (Tamarin Stott) with ear trumpet and glasses sits with Grandfather (a comic Michael Coleman) until they join, somewhat unsteadily, the family’s dance  made an especially gracious and kindly Mother, ready to welcome everyone, and to solve all problems with a beaming smile. Eagling gives the numerous young children plenty to do, and the Tring Park students performed with gusto – no cosseted little darlings here, all of them full of gleeful delight. Later, after the party guests have left and the dream begins, the mood becomes more menacing and downright scary. As Clara falls asleep in her bed, there is a rustling behind the curtains, and the most enormous Mouse King jumps out into her bedroom, (We all, like Clara, will be looking under our beds before retiring in future!) In the flash of an eye, the young Clara races off to be replaced by her ballerina self – here, in the petite form of the wonderful Alina Cojocaru who set off on her dream adventure with the smoothest, flowing bourées. Alas, the growing of the Christmas tree wasn’t as impressive – rather more a damp squib despite Tchaikovsky’s surging music, which was played with passion and fullness throughout by the newly renamed ENB Philharmonic, under the baton of Gavin Sutherland. But the battle between the Soldiers and the skull-headed Mice was great fun, causing much giggling and laughter from the audience. At times it was more like a pantomime: the sturdy cannon produced only a Christmas pudding of a ball which the Mouse King ran off with, while other mice hauled in an enormous mouse trap and fired a slice of cheese, cutting down the front row of small soldiers like skittles. The huge chest of drawers opened up to produce a fort from which more soldiers, led by the Nutcracker doll, (Max Westwell) appeared. Despite wearing the wooden face mask, Westwell, showed strength and fine technique as he shielded Clara from the attacks of the mice, though his face, of course, remained expressionless And it is around this point in Eagling’s ballet that things get a bit confusing for the audience. Now two Nutcrackers dance with Clara – the doll and also Drosselmeyer’s handsome nephew – presumably to show the confusion in her mind during her nightmarish dream. They waft in and out of the darkness taking turns to dance with her, until finally Virelles is the one to accompany her to the Land of the Snowflakes.

As the first snow flutters down on a frosty, sparkling woodland scene with its symmetrical white iced fir tree centre stage, and to the strains of the children’s choir, the Snowflakes begin to dance. It is a magical scene and the ENB corps de ballet is to be commended for their coordinated dancing with straight lines and identical heights of legs and arms. The two lead Snowflakes, Alison McWhinney and Ksenia Ovsyanick, were graceful and fluid, and the scene was capped by the arrival of a hot air balloon, which transported Drosselmeyer, the Nutcracker and Clara up and away, with the Mouse King gesturing with revenge, as he hung onto the rope below.

The second act is no longer set in the highly decorated and people-packed traditional ‘Land of the Sweets’. In fact the stage is often unexpectedly empty. Eagling uses Drosselmeyer’s puppet theatre, seen in Act 1, to introduce the exotic dances, and there is no mime depicting how Clara saved the Nutcracker from the Mouse King. (The creature, though landing safely with the balloon, finally comes to an unseen sticky end.) And there is no audience save us to watch the dancers. The curtains of the puppet theatre first drew aside to show a painted backdrop with a windmill and palm trees for the Spanish dance, which Yonah Acosta, with Anjuli Hudson and Crystal Costa performed with neat footwork, fast pace and fire. Next, the Arabian dance where Shevelle Dynott, bare-chested and turbaned, kept his slinky slave girls in order with a bull whip. The Chinese dance sadly lacked ‘ying and yang’ and the Dance of the Mirlitons has been whittled down to just one ballerina. But Ovsyanick performed it with beauty and graciousness, her steps perfectly placed and her timings impeccable. Drosselmeyer (Fabian Reimair who had shown himself a fun-loving, friendly magician in the first act,) was her careful and capable escort. Fernando Bufala offered crowd-pleasing high jumping splits in the Russian dance with four lively girls in bright red character boots, as Clara’s Mother in kokoshnik head dress, and Father in fur-edged long coat (Haworth and Francisco Bosch) danced around them with roller-skating smoothness, adding to the jollities.

The Waltz of the Flowers was visually striking with candyfloss pink and fuchsia costumes and the corps again brought the dance alive with their neat and obviously carefully rehearsed dancing. The two leads, McWhinney and Laurretta Summerscales, smiled brightly as they accomplished their challenging steps with style and beautiful épaulement.

And finally it was time for the Prince and Clara, now out of her nightie into a dazzling tutu as the Sugar Plum Fairy, to perform the well-known Grand pas de deux. Cuban born Virelles has a striking slim physique and long slim limbs, and is very light on his feet, jumping high but rarely completing the steps with a perfect fifth. Throughout the ballet, he showed little expression other than a big smile every now and then. Dancing together in Act 1, Cojocaru, china-doll-like herself, had expressed the girlish delights of being with her dream-man, eyes wide open with wonder, her legs swooping upwards effortlessly, and her body flexible and fluid in all her movements. Now the two performed the familiar fastidious steps of their final duet. Cojocaru, light as thistledown, grew in stature and performed with ethereality and lyricism, luxuriating in every phrase of the music. Virelles showed off some impressive leaps and turns. They looked good together but the expected magic did not spark as expected. Then it was back to young Clara’s bedroom as she awoke to tell her brother about her dream and the two children knelt at the window as the snow fell once more. Ahhhh! 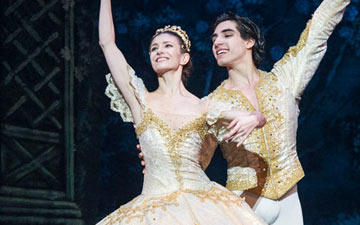 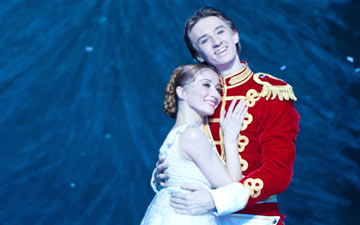