“People say I think too much about women; yet, after all, what is there more important to think about?” So mused Auguste Rodin, whose celebrated sculptures looked as tormented, convoluted, and rough-surfaced as his love life.

In Rodin (2011), Russian choreographer Boris Eifman painted in bold and restless strokes the highs and lows of Rodin’s romantic life, focusing on his tortuous relationships with two women – Camille Claudel, his student-turned-collaborator and greatest muse; and Rose Beuret, his long-time partner and eventually his wife – while putting his own theatrical spin on this curious love triangle.

Eifman is known for his theatrical approach to dancing as well as for his physically demanding and dramatically super-charged movement style – “psychological ballet theater” – an antithesis of pure classicism and subtlety of expression. Rodin, which his company, Eifman Ballet of St. Petersburg, presented at the Kennedy Center Eisenhower Theater, reveals the choreographer’s artistic credo in full spectrum, demonstrating the chief triumphs and obvious flaws of his creative style.

There was hardly a moment of calm and contemplation in this fast-paced, visually striking yet dramatically misguided two-hour show that featured an abundance of spectacular movement and eye-popping imagery but very little emotional candor.

Despite its title, the story centers on Camille Claudel, a young artist who falls in love with Rodin, the famous French sculptor almost twice her age; and the ballet begins where her artistic and romantic life ends – at a mental institution where, abandoned, penniless and mentally broken, she spends her days as if imprisoned. The asylum is a strange, dismal place, inhabited by spooky-looking young women in hideous white garb. With vacant smiles and frantic gazes, they tour their confinement quarters in wild circles. It is to this pitiful community of broken and lost souls that the remorseful Rodin comes to look for Claudel. When he sees her dire circumstances, he recalls memories of their better times. From this point forward the plot leaps back and forth from “now” to “then,” showing an escalating series of episodes and flashbacks from their passionate yet uneasy liaison.

As the story travels back in time, we learn that Claudel was a brilliant sculptress herself, who aspired to establish her own artistic identity. We see her as a wild-eyed, eager understudy in a studio, where she perfects her craft, trying to make it big in a world dominated by men. There she meets Rodin. Naturally, as their eyes lock, his attraction to her is immediate – she is everything he has ever wanted. But instead of putting her on a pedestal to worship, he places her on a tilted working table to model. They work together and she inspires his greatest works; but as his fame and fortune grow, so does her jealousy (Rodin keeps up an on-and-off affair with his old flame, Rose) and frustration as artistic success seems to elude her. In a fit of rage and despair, she creates, only to smash in pieces, one of her greatest sculptures, Clotho, a statue depicting an ugly creature covered in rags and tangled long hair – an allegory of Claudel’s own dreadful destiny, the final destination of which we already know.

As compelling as the ballet’s plot might seem, it was too thin to be spread over the two-hour production without veering into monotony and repetition. In general, the ballet lacked a consistent narrative drive and often felt episodic and disorienting. Amid all the hyper-athletic steps, there was little chance to look deep inside the inner world of the main characters.

Yet there was plenty of superlative dancing. As the title character, the imposing Dmitry Fisher brought loads of physical strength and infinite charisma to his role, conquering with impressive skill and endurance Eifman’s choreographic hurdles. Lithe and fearless, Anastasia Sitnikova looked determinedly seductive as Claudel, her rubbery arms and supple body sinuously stretching in some of the most impossible ways. Her frenetic love duets with Fisher were appropriately hot and steamy. Angela Prokhorova played the plain, long-suffering Rose with just the right amount of restraint and solemnity. I only wished Eifman would tell us more about her character. We never found out what kept Rodin coming back to this unassuming woman besides her exceptional cooking.

The supporting cast also deserves special recognition here. The Eifman dancers proved a troupe of well-drilled, hard-working and dedicated artists; and in this production, the choreographer gave his corps some of the most clever and visually stunning scenes. As the ballet unfolded, the ensemble, dressed in skimpy, nude attire to represent bare skin, brought Rodin’s greatest sculptures to life, at last creating an imagery beautiful in design and powerful in concept. 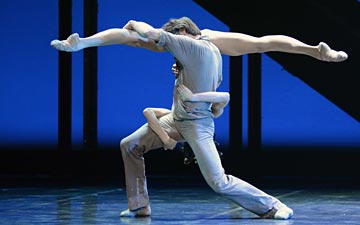 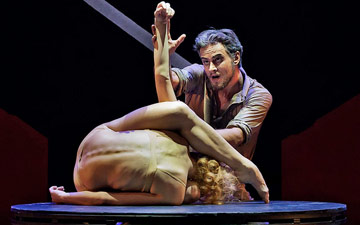