New English Ballet Theatre (NEBT) closed out their brief summer tour with some performances at the St James Theatre in London’s Victoria, featuring its own 12 dancers and some Royal Ballet friends in a night to raise money for Nepal.

NEBT, going for 5 years now, are about trying to create opportunities for (young) talented dancers and choreographers. They effectively showcase talent. Their touring rep springs from choreographers involved in the Royal Ballet (RB) Draft Works series, with the addition of 2 in-house pieces from their Company Manager, an ex Dutch National Ballet (DNB) dancer. For this Nepal night two other choreographers, Alastair Marriott and Marcelino Sambe (both Royal Ballet), were drafted in together with professional guest dancers. The overall standard of dancing of both NEBT and guests was very good – if the choreography was rather more mixed.

In terms of touring rep NEBT have two winners: Valentino Zucchetti’s Orbital Motion and Kristen McNally’s Mad Women. Those who follow the Royal Ballet’s Draft Works will know both choreographers, McNally for her wild and wayward approach to dance-making and Zucchetti for the joy and effervescence he brings to neoclassical steps – she rips up the rule book to good effect and he doesn’t, also to good effect. Mad Women sees a future world where beautiful cyber-women decide to take power for themselves, doing to death a couple of gullible pizza delivery boys who think they they have struck gold. Rinse and repeat, and all done to one of her zany sound collages. Fun and entertaining, it closed out the first half of the evening. Closing out the second half was Zucchetti’s Orbital Motion, to some pulsating Philip Glass and using 10 of the company to dazzle us with their energy and drive. The movement might be time-honoured but Zucchetti is above his years in threading it together so refreshingly well.

Erico Montes had two pieces in the show. Toca, part of the touring rep, was to some Villa-Lobos – a sultry duet that was danced well but didn’t really seem to draw me in. There is a backstory but I don’t think you could discern it from the movement alone – the position I was in. Montes’ second piece was Prometheus, originally created with a Royal Opera House Deloitte Ignite festival in mind, and danced by the Royal Ballet’s David Donnelly, dressed rather as if Apollo. It’s a good look and again there is committed dancing, and solid well-rehearsed movement. But it doesn’t offer much cheer as either an abstract piece or providing lots of illumination on the Greek Titan that gave us fire. Daniela Cardim Fonteyne, the ex-DNB dancer-turned-choreographer, teacher and Company Manager, also had two pieces in the show. Tangents, to some movements from Mussorgsky’s Pictures at an Exhibition, was an abstract investigation into relationships for 3 couples (I read after). The dancing was polished and, refreshingly, the movement was more European and free, with Kylian motifs peeking through, but I don’t really know what it was trying to say in all its busyness and comings and goings. Wundarra had a bit more to it – a duet to aboriginal music, it had punch and felt very emotional. Not long, almost a sketch, I’d be interested if it developed further.

The remaining two guest pieces were particularly welcome. Marcelino Sambe is a much-admired RB Soloist who is also starting to show a feel for choreography and his La Llorona danced by the Royal Ballet’s Teo Dubreuil and Maria Barrosa (ex RB Young Dancer and now with Companhia Nacional de Bailado) made fresh a ballet duet with unusual partnering and abrupt changes of direction. It was both lyrical and beefy, like Sambe himself, but in the MacMillan line of showing clear emotions in movement. The Royal Ballet’s Alastair Marriott has created many pieces over the last few years (including main stage works) and in this choreographic company stood out, as you would expect. His Lieder to some gentle Brahms was danced with fabulous attention to detail by Olivia Cowley and Gary Avis. The second part, more slow, was particularly mesmeric, Cowley dominating the stage and Avis a strong and supportive partner. We rarely see Avis dancing in such material these days and it’s a shame. All up this was dancing at another level. Good to see them supporting the Nepal cause and Cowley is also a patron of the company.

Also included on the night was a brief film on the devastation in Nepal, by Camille Summers-Valli, one of several she has made to illustrate the impact of the earthquakes and work being done to rebuild. There was also a speech by Alison Marston who setup NERA (Nepal Earthquake Recovery Appeal), in whose name the funds were being raised. Marston, who was born in Nepal, was nervous and rambled rather, but her knowledge of the country and its people won through to connect with us all, and she actually made a compelling case for lobbing money to her charity. Donations can be made here:
www.everyclick.com/nepalearthquakerecoveryappeal2015

Stripping away the Nepal and guest aspects of the night, NEBT looked stronger than the first time I saw them, and it’s gratifying that dancers they have incubated are now in RB and Rambert, for example. My only misgiving is that *all* the current repertoire is down to younger Royal Ballet choreographers or made in-house. There seems a need to shake it up (as Ballet Black does) with a more diverse range of choreographic influences and also, as the Marriott piece showed, to include a piece or two by more seasoned choreographers, to act as a sterner test and draw more people in. But NEBT is still a young work in progress itself – good work they do for dancers and on this night good work for Nepal too. Jolly good show overall and worth seeing them. 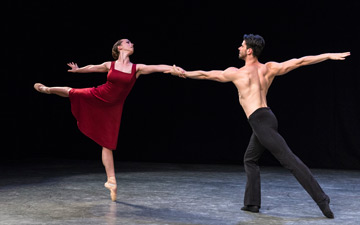 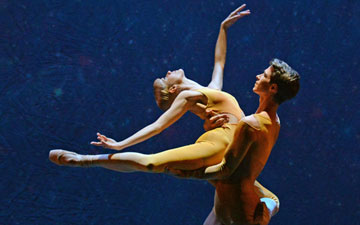 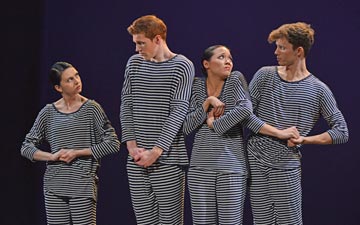 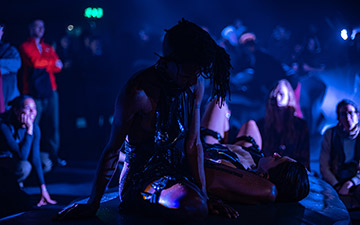