This challenging programme presents three very different takes on modern dance, each rooted in the vernacular of India, then and now. The three episodes explore diverse issues of urbanisation and capitalism, an investigation into the relationship between dance forms and half a century of political conflict.

The first and last of the triple bill were performed exclusively by men (respectively a duo and a quintet) but it was the female solo centrepiece that mostly absorbed my attention. Hemabharathy Palani is a dancer who has trained in many styles (kuchipudi, bharatanatyam, ballet and capoeira to name but four) and her solo begins with the delicate, sensual movement of classical bharatanatyam, starting with a view of the undulating, shifting sands of her back. Her body is surprisingly, simultaneously, both fluid and statuesque with great attention paid to the elegant and sinuous rotations of her hands and arms. It ends – at the polar opposite of dance forms – in an explosive episode of physical theatre as she spits out copious amounts of water to drench both herself and the stage.

Trikonanga is beautifully set with lighting (by Pipon) that caught the sparkling fire in Palani’s dark eyes, offset by her hair scraped up into the shape of a tepee topped off by a pom-pom. Her journey from formal classicism to shivering foaming-at-the-mouth is made with an unabated conviction. It may seem like a fall from the grace of classical form but the strength of her attitude doesn’t waver. This arresting solo was originally made as part of the open studio programme at the Ballet National de Marseilles, in 2013, and it has travelled well.

According to the scheduled programme order, Trikonanga should have opened the show but I suspect that the excess of water on the floor and the absence of an interval between the first two pieces necessitated a change. Instead, Deepak Kurki Shivaswamy’s About NH7 took pole position. It opened with Indian music while the house lights remained up. Two guys (Charan CS and Amaresha Kempanna) arrived on stage in everyday clothes of matching pastel hues, mimicking and following each other’s actions in a unified duet.

Beginning as office workers, donning a pair of hi-vis, yellow waistcoats suddenly turns them into construction workers and the dance becomes a contest. First one, and then the other, gets the upper hand, wrestling each other to the floor, Greco-Roman style, and taking it in turns to dominate by standing on each other’s back. Their mutual subservience seems assured when they sit in under-garments with shoes uncomfortably balanced on their heads. About NH7 captures the intensity of Indian city life with relevance and flair although it finishes abruptly and in a muddle with the audience not knowing whether to applaud for several seconds after the end.

The final piece of the programme was notable for using non-trained dancers. It begins with a man in a long blue cape (the initial tableau reminded me of Lescaut’s opening in Kenneth MacMillan’s Manon with the robe carefully laid out around the dancer). He seems to be a warrior straight from the Mahabharata. His exit brings four everyday men – with everyday, rotund physiques – to the stage, each stripped down to orange loincloths. They appear to be rural tribesmen, carrying bamboo poles. Video film on the back screen shows news clips of protests – apparently in the north-eastern Indian state of Manipur, which has been long riven by insurgency.

The performers avoid boots swinging on a string (unfortunately, the fifth cast member is clearly seen in the wings manipulating the pulleys) and roll out of the way as the boots fall noisily to the floor. Being “under the boot” seems a blunt metaphor for the military regime in control of Manipur for more than 50 years; although the ending, which has the four men emerging from the wings tied up in red twine, was an effective statement to underline the state of quasi-captivity within which all Manipuri’s live.

This trio of powerful works emphasises different aspects of the state of modern India: politically, socially and culturally. They combine to present a fascinating and absorbing programme that typifies the kind of surprise autumn present that a random dip into Dance Umbrella often brings. 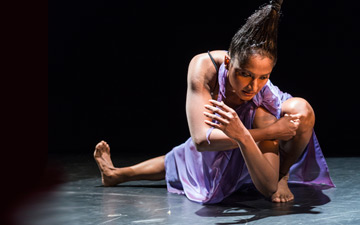 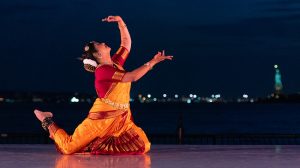