Royal New Zealand Ballet proudly claims to represent its small southern hemisphere country on the world stage, travelling widely. Its latest visit to London (en route to Italy) ends a tour of other British cities with Giselle and a mixed programme entitled A Passing Cloud. Three of the works in the quadruple bill are commissions to mark anniversaries: the company’s 60th birthday in 2013 and the 2015 centenary of First World War battles in which many thousands of New Zealanders died.

Because English National Ballet has repeated its programme of WWI ballets this year, RNZB’s two more variations on the theme risks seeming overworked – to us, though not to their audiences back home. The solemnity of the middle section of the programme is alleviated by irreverent visions of heaven and hell: Javier de Frutos’s Anatomy of a Passing Cloud and Andonis Foniadakis’s Selon désir.

De Frutos’s Cloud is a joyous pièce d’occasion celebrating the company’s place in Pacific islands’ culture since its creation in 1953 as a Commonwealth ballet company. His third work for RNZB, it’s set to Pasifika music that he collects ‘obsessively’ – Polynesian pop, ancestral songs, Cook Islands’ chants and drumming, all with catchy rhythms and harmonies. His playlist includes a male voice reciting an extract from the Book of Genesis in the Maori language, so we may be listening to the world coming into being.

Twelve dancers dressed in colourful outfits (designed by de Frutos himself) stand in a circle, possibly representing the hours of the day or the months of the year. They split into trios with a ringleader, William Fitzgerald, in their centre. The wildly inventive choreography acknowledges that the tribal community are ballet dancers, combining two-footed vertical jumps with athletic leaps, deep pliés in second position with a flurry of fouettés in bare feet.

Girls are swung exuberantly high between men, smiling with glee like excited children. Fitzgerald tries to dominate a feisty female, Abigail Boyle, who gives as good as she gets. There’s a lot of pushing and shoving in combative duets, as well as witty encounters between come-hither couples. The circle reconvenes towards the end for a tribal hooley before the celebrants depart to a love song, leaving the last pair looking over their shoulders at the happy audience. De Frutos says his title, The Anatomy of a Passing Cloud, means everything and nothing. His creation, however, is a substantial gift to the company’s dancers.

Andrew Simmons’s Dear Horizon is a lament for the ten thousand Anzac soldiers who died during the Gallipoli landings – but also, he writes, a reflection on all that war takes away. The commissioned score by Gareth Farr was originally played live at the premiere on Anzac Day, 25 May, this year by the New Zealand Army Band, and recorded for use on tour.

Men and women are separate at first, the grey-dressed women (on pointe) surging like waves, arms reaching for men no longer there. A squad of six men dance together in canon sequence, their bodies dwarfed by the overhanging set: a huge mesh of debris and dying flowers. It may represent the cliffs of Gallipoli or any unassailable obstacle. Simmons, a former member of the company now based in Dresden, is a skilful choreographer. He uses canon effects wisely and contrasts moments of absolute stillness with urgent responses to the music.

He can’t, however, resist the temptation to turn the grief-stricken women into angels of death or mercy. They appear, heads masked by bandages, to escort the men on a march towards the finale. A principal pair of lovers, Mayu Tanigaito and Shaun James Kelly, lie side by side, as though on a tomb, as the others mourn. The enormity of the sacrifices in the Great War make a danced requiem, however sincere, seem inadequate.

Passchendaele, by Neil Ieremia, a New Zealand contemporary dance choreographer of Samoan heritage, commemorates another catastrophic battle in which New Zealanders died in their thousands in a single day in 1917. Ieremia sets the 11-minute work in a desolate afterworld in which the lost and the living are re-united in final farewells. Squares of light in the shape of coffins bring nine men back to life, to be joined by a phalanx of women, their hair loose. Dwayne Bloomfield’s haunting music, also played by the New Zealand Army Band (of which he was a member), includes the sound of bells, gunfire and an eerie whistled tune.

The danced action takes place as if in a dream, the men repeatedly struck down, the women comforting each other, until they embrace the men and lay them back in their light boxes. Mercifully brief, the piece with its narrative soundscore ranges from nightmare to agonised acceptance.

How to follow these two wartime elegies? With an intensive work-out to religious music by Bach interspersed with electronic racket by French composer Julien Tarride is artistic director Francesco Ventriglia’s choice. Selon désir is Greek choreographer Andonis Foniadakis’s 2004 creation for the Ballet du Grand Théatre de Genève. He is evidently a hyperactive choreographer because the Ballet de Lorraine brought a similarly frenetic piece, Shaker Loops, to the Linbury Studio earlier this year.

In Selon désir (‘according to desire’), 16 dancers hurtle round the stage in a maelstrom of movement that apparently contains references to figures in Baroque paintings of spiritual ecstasy and despair. Men and women are dressed alike in pleated skirts and cowl-neck tops, a unisex uniform like that used by William Forsythe in the manic concluding section of Impressing the Czar.

Introduced by soloist Alayna Ng, flailing her long hair in a frenzy, the dancers whirl and roll in relentlessly circular moves, hooking onto each others’ limbs in between avoiding collisions as they weave at speed in and out of the wings. Duets appear to be wrestling matches, with the male victor dragging the limp female loser across the stage as though she’s dead or drugged. You can only admire the performers’ stamina – especially those who appear in all four works on the programme – but the piece is exhaustingly incoherent to watch. Foniadakis is the kind of cult choreographer who can make ballet dancers look daringly different, but the challenge soon palls. 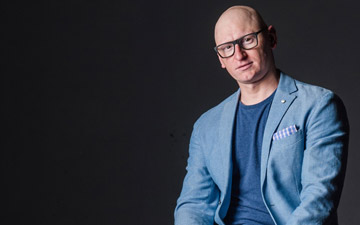