When Sydney Dance Company’s courageous New Breed program had its international premiere in late November in Germany at the Festspiele Ludwigshafen, one work had a somewhat dramatic response. Of the works presented by four emerging choreographers – Kristina Chan, Fiona Jopp, Bernhard Knauer and Daniel Riley – Chan’s piece, Conform, was greeted by walk-outs and a tirade of verbal abuse from one audience member, or so I was told by one of the dancers performing in it. So, when New Breed had its Australian opening, I was more than curious.

Rafael Bonachela, artistic director of Sydney Dance Company, had offered those four, specially selected choreographers the chance to make a work using his remarkable dancers, along with the full resources of his company: an exceptional opportunity. Of the four works, Chan’s piece was by far the most challenging – hence (perhaps) the German reaction. Chan, a much-lauded independent dancer but, so far, with just a few short choreographic works to her name, created a relatively long work (around 30 minutes) for eight male dancers. It had the aim of exploring characteristics she had observed from watching certain kinds of male behaviour. Much of it took place in a murky mix of haze and dim lighting by Matthew Marshall, with the dancers dressed in dark street clothes and sneakers designed by Alesia Jelbart. Its relentless, driving electronic soundscape by Sydney-based composer James Brown was an assault on the ears with some of it sounding like the continuous firing of guns, or high pitched noises that might be used during some kind of torture. And yet Chan’s piece was not only the most challenging, but also the most powerful piece of dance on the program.

Conform, which took second place on the program, began with the eight men scattered randomly around the performing space. Nothing seemed to be happening, although slowly we became aware that the bodies were moving, almost imperceptibly and often caving in on themselves. As the piece proceeded we watched as two men competed for dominance, one pushing the head of the other who forced himself forward against the push. Or were they in fact holding each other up? Some strong solo work from Richard Cilli showed slow motion movements, mostly floor-based. Cilli was apparently agonising over some complexity in his life. Other sections were choreographically designed to show group behaviour. Here the majority of the men walked together purposefully and in highly structured formations, blocking out others who seemed either to be in the way or wanting to join the group formation. Every section raised questions, none with an obvious answer. It was this kind of complexity that gave Conform its strength as a socio-political comment on contemporary masculinity.

Bernhard Knauer’s work, Derived, was danced by two women and two men to a score by Knauer’s father, Jürgen Knauer. It was a response to musical structure and showed off the dancerly skills of the artists of Sydney Dance Company, who often move with such fluidity that they seem to have no bones to get in the way of their movements. It was a pleasant piece and an easy-on-the-eyes opener, but slightly repetitious choreographically.

After the interval, Fiona Jopp, like Knauer a permanent member of Sydney Dance Company, showed her first piece of professional choreography called so much, doesn’t matter. Jopp’s starting point was the 17th century song Greensleeves and she examined the various ways in which the song, over the centuries, has been perceived and used. There was a lot of horseplay and a lot of interaction between the five performers led by Juliette Barton. Some of it involved the transfer to others of the long skirts most of them wore. But the work didn’t display all that much choreographic structure. In her notes Jopp mentioned a host of ideas – ‘history, temptation, desire, manipulation, virtue and unity’. It was an ambitious move to attempt to examine so much in a piece lasting just 15 or so minutes and the point (or points) got somewhat lost.

The final work on the program was Reign choreographed by Daniel Riley. Riley currently dances with Bangarra Dance Theatre and is the most experienced choreographer of the group, having already made major works for various companies and organisations, including Bangarra. Reign examined the idea of women in power and the forces that often end their reign. Choreographically it seemed to have strong Indigenous overtones (Riley has a bloodline that runs through the Wiradjuri clan of western New South Wales). It began with Janessa Dufty covering her limbs with sand from a pile in a downstage corner of the performing space. It recalled an early section of Bangarra’s production of Ochres when a dancer uses yellow ochre in a similar fashion. Much of the movement, which was organic in look and usually quite grounded, also seemed Bangarra-inspired. And yet the theme seemed quite Western to me and I struggled to reconcile the movement with the theme. Nevertheless, Riley produced a strong, well-structured piece danced to a powerful, almost dominating score from composer (or musical artist as he likes to be known) Nick Thayer.

A small bay at Carriageworks, a venue largely set aside for alternative productions, was packed to the rafters for the opening of New Breed. It was indeed a courageous move from Bonachela and it was not only the choreographers who were commissioned but the others in the collaborative teams as well. It is an initiative that I hope will remain on the Sydney Dance Company calendar in the future. Dance moves forward as a result of initiatives like New Breed whether or not the works achieve their aims. 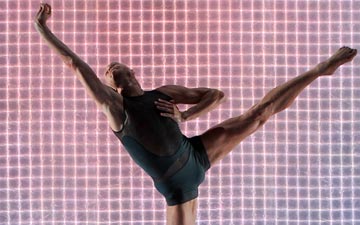