2016 marks the tenth annual Sadler’s Wells Sampled, a January taster of the London dance house’s upcoming season. The bill always features a smattering of different styles and is specially priced to draw in infrequent theatregoers and regulars alike. This year’s programme included everything from classical ballet to kathak to tango, with groups as diverse as Sadler’s resident Company Wayne McGregor, Dutch breakdance crew The Ruggeds and Canadian circus collective The 7 Fingers taking to the stage.

Up first was McGregor’s troupe with Outlier, a blitz of speedy sequences set to Thomas Adés’s capricious, supernatural-sounding Concentric Paths. Originally created for New York City Ballet, the three-part piece explores what McGregor identifies as the ‘outliers’ of movement: the physical anomalies that occur when the body is forced into inorganic angles and manouevres. Precarious balances and erratic lines abound, all woven into the complex layers of Adés’s violin concerto. The ten performers – among them former Rambert dancer Dane Hurst, I was pleasantly surprised to see – proved by and large adept at handling the swerving choreography, though the tricky syncopations of the petit allegro in the third movement eluded some. Still, it was an exciting opener, one full of stimulating shapes and electric notes.

The electricity continued to crackle with Julia Hiriart Urruty and Claudio González’s Amor de Tango, a theatrical duet depicting a man’s memories of his late wife. Equal parts sexy and sentimental, it’s presented in two halves: the first a wistful Argentine tango to a Spanish ballad, González dressed as an old man and Urruty in swirling layers of black, and the second an erotic nuevo tango to James Vincent McMorrow’s Wicked Game, the pair stripped down to bedroom attire. The chemistry between them was blazing and their footwork watertight, particularly in the tricksy final moments. Judging by the audience’s rapturous applause, it was one of the evening’s best-received pieces.

The pair later returned for another two-parter, this time a look back at two glory eras for the tango: the 1940s, the dance’s so-called golden age, and the 1970s, when it was developed for the stage. The first section was elegant and glitzy, the second spicy and loose, and again Urruty and Gonzalez’s chemistry was front and centre. The elaborate lifts in the second section were a particular treat, as were Urruty’s racy body rolls.

Solos by two of the finalists in the 2015 BBC Young Dancer competition wrapped up the first act. Connor Scott, who won the contest and is now training at Rambert School of Ballet and Contemporary Dance, presented a self-choreographed contemporary piece that makes nice use of his sinuous form, sturdy balances and instinctive musicality. Its abrupt ending and lightweight premise – a call for people to “get up and open your eyes to your surroundings” – somewhat undercut its strengths, but Scott’s rhythm and poise are undeniable. These qualities also emerged in Vidya Patel, whose dynamic Khoj – The Search, performed with Jaina Modasia, demands a high degree of both. I first saw this kathak piece at Latitude Festival last summer and was as impressed then as I was this weekend with Patel’s composure and precision. A live band accompanied the piece on both occasions, and both times she matched her hand and footwork to their beats perfectly.

The second act began with an extract from circus troupe The 7 Fingers’ TRIPTYQUE. The surrealist segment is a dreamy haze of dance, theatre, acrobatics and optical illusions, all of which take place in a room with more than a whiff of mental hospital about it. It’s hard to imagine all this abstract trickery holding the audience’s attention for too long without a narrative eventually coming into play, but the extract itself was brief and easily captivated, the final feat – a spectacular handstand on a spinning platform – in particular.

The programme promised an excerpt from Northern Ballet’s full-length production 1984, but a last-minute injury saw Royal Ballet’s Zenaida Yanowsky subbed in with a performance of Michel Fokine’s The Dying Swan instead – a more than worthy rep for the classical ballet category. Yanowsky is no stranger to the suffering swan bit, having tackled Odette/Odile in Swan Lake many times in her career, and gave a beautiful rendition of Fokine’s famous solo, offsetting her light-as-air bourrées with sweeping arms and a dramatic curved torso. She’s a reliably sturdy dancer and brought a welcome sense of physicality to the fragile role, rendering the bird’s struggle a touch more animalistic than in previous versions I’ve seen – terrific stuff indeed.

Sampled concluded with a turn from b-boy group The Ruggeds, who powered through a series of loose sketches studded with props, battles and plenty of freestyling. The high-octane start, accompanied by a pounding synth, mellowed early on, giving the seven dancers a chance to catch a breath before powering up again; still, a ticking clock noise persisted throughout, adding tension and egging the energy along where it might have otherwise lagged. The piece could be structured a little tighter, but it was a fun note to end the evening on and garnered a great deal of favour from the audience.

Like in years past, the programme wasn’t limited to the auditorium; before and after the mainstage performances were various displays around the theatre, including film screenings, demonstrations and a post-show workshop from The Ruggeds – all in all, an appealing evening for new and veteran viewers alike. 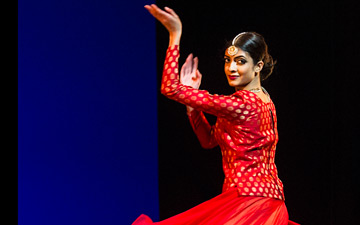 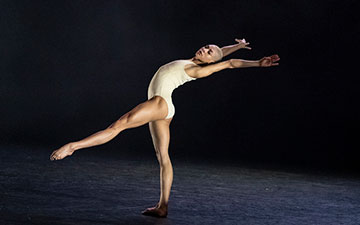 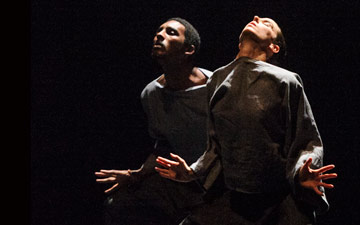 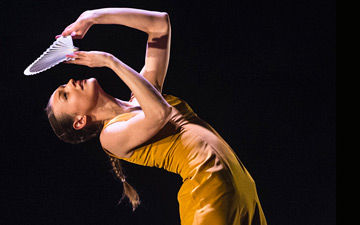