If you know Sadler’s Wells then it is possible that you may know the Shakespeare’s Head, the kind of old-fashioned, no-nonsense public house that is sadly becoming an anachronism in modern-day London, which sits alongside the theatre, in Arlington Way. You may not know that “Shakey’s” has a crowd of regulars that share a common love of horse racing; or, to be more specific, betting on its outcome.

The day of this London premiere was important to this club-within-a-pub because it was the beginning of the Cheltenham Festival. So, one can only imagine the astonishing outcome of an afternoon’s drinking and race-watching, being followed by encountering four thoroughbred horses in the street outside. Apparently, one tipsy tipster vowed to give up alcohol as a result of this surprising vision!

But, the horses were for real, being exercised up-and-down Arlington Way from their temporary stables in the Sadler’s Wells car park, since they were the stars of this show. Training these wonderful beasts to perform on a relatively small-scale stage, in front of a full audience of 1500, is a remarkable feat by any standard. Their dressage may not be Olympic Gold-medal standard but it is undertaken with minimal overt instruction and under such constraining circumstances that one has no option but to marvel at the discipline and control. I have witnessed scared horses bolt into traffic on a road (with horrendous consequences) and I can’t comprehend the potential chaos if one were to have bolted into the packed stalls of Sadler’s Wells.

It is, however, unfair to suggest that this is a show all about the horses. It is a holistic, theatrical work in which the equestrian cast features alongside art, music, dance and comedy made and performed by humans. The enigmatic Bartabas is the equine trainer and visual artist at the heart of the show. He runs Théâtre Equestre Zingaro – a circus-come-theatre big top in the hinterland of Paris – as a base for grand spectacles involving up to 40 horses; but he also goes out on the road, into more intimate settings under a proscenium arch, to perform structured, choreographed works of dance theatre. This is his second visit to Sadler’s Wells: the first, in 2011, involved collaboration with the late butoh artist, Ko Murobishi (in The Centaur and the Animal).

His latest show is another collaboration: this time, with the flamenco bailaor, Andrés Marín. They are joined not just by the four horses (not forgetting an amusing cameo by an energetic donkey, appropriately named Lautrec) but also by a countertenor, two musicians and a charismatic comic actor by the name of William Panza. A great name since he seems in so many ways to channel his literary namesake, Sancho. Panza is the glue that keeps the show on track, opening it as a tiny priest clambering on and off a stool to pay money to “light” a succession of candles (when he runs out of coins with only one candle left, he asks an audience member in the front row to stake his final light)! In one sequence, dressed in an over-sized wimple that obscures his face completely, Panza shuffles around with a peculiar rolling gait, drawing laughter out of nothing but his physical comedy.

Golgota has a strong visual appeal, broadly consistent with the religious imagery in the paintings of El Greco and another 17th Century Spanish painter, Francisco de Zurbarán. There are candles, bells and incense burners (held and swung between the fingers of Bartabas’ outstretched hands while on horseback); and the main human protagonists wear the large conical hats (caperuzos) of el cofradia. These are religious fraternities specific to Spain that take on a special significance during Semana Santa (the Holy Week between Palm and Easter Sundays). Perhaps because we also associate this style of pointed hat with the Ku Klux Klan, it also provides a sinister overlay to the performance, aided and abetted by low lighting and dark ambience.

The countertenor (Christophe Baska) is outstanding as are the cornet and lute players (respectively, Adrien Mabire and Marc Wolff) who played various extracts from the compositions of Tomás Luis de Victoria, a catholic priest who was a contemporary of El Greco. One of the lutes played by Wolff had a neck as long as a small step-ladder.

While flamenco fitted the geography, it came to Spain more than a century after the deaths of de Victoria and El Greco but a certain amount of artistic licence should be allowed. Marín is an earthy, deep bailaor and much of his dance performance is deliberately constrained by the lack of noise from his footwork (zapateado), mostly performed without shoes on the bed of rubber chips that cover the stage. He makes up for it with rhythmic slapping of his body and by one intense bout of traditional flamenco zapateado on a small, square of wooden board. Mostly, he is a foil for Bartabas and his horses, following the pattern of their movement or juxtaposing it in polarity. In one memorable sequence he faces off against a horse; man and beast squaring up to each other from opposite sides of the stage.

The unique feat of Bartabas (and Marín) is to have created dance theatre in which the equine performers are but one integral part. The close control of their power is remarkable and the bond between rider/trainer and animal is clearly immense. One of the three white horses, named Horizonte, is now 29, having worked with Bartabas for almost a quarter-century, and about to retire from the stage. He clearly deserves to swap the temporary stable in a concrete car park in London for some lush green pastures. I do hope so. 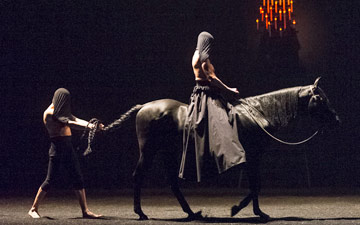 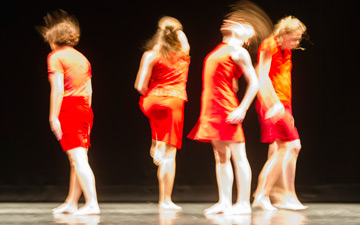