Solo performances do not get more personal, or more powerful, than this. ‘For Now, I am……’, which premiered last year, is an autobiography in dance; apparently the second in a planned trilogy of works by Marc Brew, following on from ‘Remember When’, which he made in 2008. This earlier work focused on Brew’s young adult life, training to become a dancer in his native Australia, leading to his first professional job with the PACT Ballet, in South Africa.

In 1997, at the age of 20 and within months of starting that new life, Brew was a passenger in a car with three friends, travelling on a day trip to a nature reserve. Their vehicle was hit by a drunk driver. All three of his friends died.

It has taken eighteen years for this part of Brew’s story to be told because ‘For Now, I am….’ picks up his life in progress, as an unconscious patient in hospital following that fatal accident. The performance begins in stark light with a large, white silk sheet covering most of the stage. The ruffled flatness of the material is notably interrupted by the uneven contours of an object beneath it. It takes just a moment to realise that the form is human.

It is hard to tell that the sheet is white since it provides the screen for a combination of Jamie Wardrop’s remarkable projections and Andy Hamer’s impactful lighting effects, both of which manage to convey a sense of discipline and order overlaid by the random wanderings of a psychedelic dream. This imagery comes to represent both the sterilised routine activities of a hospital (with grids and radio waves moving across the material) and the fluctuating state of the patient’s mind. At one juncture, the silk sheet seems to be a body of blue water, rippling with waves, mixed with watery sounds flowing through Claire McCue’s atmospheric score.

Eventually, Brew is revealed, lying prone, bald head facing the audience, naked above the waist, as the silk sheet is gradually drawn away from him. The vehicular impact left Brew with spinal cord damage – specifically to his C6 and C7 vertebrae – and there are several arresting moments that identify the growing realisation of how extensively his body is damaged. Fingers crawl up his torso like hungry insects. Later, he reaches around to examine the pronounced landscape of his spinal column, feeling each vertebra as an audible click is heard in the music. It is powerful and poignant imagery.

An eclectic range of movement is built upon Brew’s expressive arms, extraordinary upper-body power and that strength of conviction that seems peculiar to every great dancer. His legs are expertly manipulated into place but sometimes in a way that manages to give the remarkable illusion that it is the powerless limbs themselves that are doing the work.

Brew is now a choreographer of some distinction, creating choreography from his Glasgow base for many dance companies (including the national ballet ensembles of Scotland and Wales) and yet this is a work – as he made clear to Dame Evelyn Glennie in a strange kind of role-reversal, post-performance interview – that can only ever be performed by him. It is an absorbing portrayal of mind triumphing over matter.

As the young man waking up in that South African hospital, Brew must have believed that his dance career had been torn away from him before it had even started. A body that had been trained to an elite level of ballet now no longer worked. And yet, this ideal of ‘For Now, I am….’ has led to a different but nonetheless hugely successful career in dance: one I suspect he could never have imagined in the months following that awful car crash.

The final moments of his work present a powerful coup de theatre with Brew, held by a harness, hoisted feet first above the stage. This upside-down crucifix pose provides an obvious allusion of defiant resurrection; but also, perhaps less obviously, it seemed to present the physique of a powerful gymnast. Either way, a similar point of renewal is made.

This absorbing 40-minute performance was followed by an unusual Q&A interview with Dame Evelyn Glennie. There is an understandable empathy between a profoundly deaf percussionist and a dancer unable to walk. Both have overcome huge disabilities that would seem to have made their chosen professions impossible to pursue and yet they have each persevered to achieve international recognition as elite artists.

Theirs is a compelling match and – unlike most such post-performance events – this discussion seemed to be an integral extension of the ‘For Now, I am….’ narrative. However, it is usual for the artist that has just performed to be the interviewee and yet it was Brew that took on the interrogatory role and the erudite Glennie who did most of the talking. Their mutual admiration and affection was palpable but having seen Brew’s autobiography in movement, I would have liked to hear more of his words to complete the picture of how he is, for now. 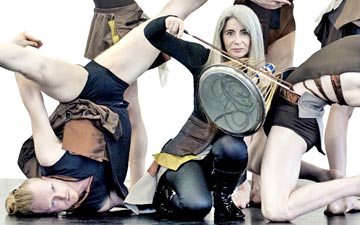 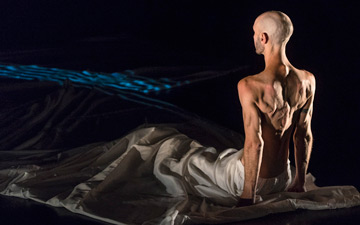 Gallery – Marc Brew Company in For Now, I am…