This year’s Ballet Central 2016 tour kicked off in Tonbridge at the EM Forster Theatre (part of Tonbridge School) – I’ve never been there before and was pleasantly surprised by its comfort with huge amounts of leg room in the stalls, good sight lines etc. Bravo.

Ballet Central is the final year of the senior dance course at Central School of Ballet and exposes the students to professional life, touring and real audiences in all their rich diversity. And don’t let the name fool you into thinking they are just about ballet – they aren’t and have strong contemporary and musical theatre traditions as well. With ballet companies doing much more contemporary work and contemporary companies expanding the nature of what they do, Central’s approach creates well-rounded dancers, bloodied in touring and who can contribute to a company from the off.

Ballet Central programmes always feature lots of smaller pieces and this year was no different with eight works on the bill. It was also the usual healthy mix of tradition, older and, for the major part, newer pieces especially commissioned. It’s a good mix that has something for everybody and sees the students tested in different ways. Another Ballet Central tradition is that most of the music is composed (and played live) by their Music Director, Philip Feeney, who although offstage is always in view often animatedly playing his keyboard to some recorded accompaniment, large headphones on and head bobbing away. With much new work being shown, it’s Feeney who can compose a soundtrack that exactly suits what the choreographer wants. That said, too much keyboard can rather wear and the night was usefully punctuated by pieces using more normal recorded soundtracks.

The evening opened with the late Christopher Gable’s Celebration. It’s a good choice as it is about the changing relationships between a group of young dancers – which is what the company dancers are having to go through these last few years and especially on the tour. Created for the company in 1995, it’s for 4 males and 4 females, classical and nonchalant at the same time. It’s a nostalgic look at the trials and tribulations of growing up with lots of personality on display. But the steps are classical and Carole Gable, who stages her late husbands work, is a stickler (thank goodness) for doing it right, and at the start I was particularly struck by the 4 men who were in perfect jumping synchronisation – wonderful. But this was their first show and towards the end they were starting to get a little tired and the polish dulled just a little. They will learn as the tour goes on! As ever the ladies were more in synchronisation. Supportive music by Philip Feeney and nice new costumes by Richard Gellar in white and turquoise. Gellar is the school’s Resident Costume Designer and this year excelled himself by creating quality costumes for 7 of the 8 works. It makes such a difference, with none of the “raiding the costume cupboard” feel you can sometimes get with school shows.

The evening closed out with a polar opposite of a piece – Christopher Marney’s War Letters – about war, soldiers and the girlfriends and wives left behind. Originally created for Ballet Black, Marney has augmented the work and I think slipped some more dance in for the cast of 13. Both Ballet Black and Ballet Central have used Marney for many pieces now, and for an understandable reason: audiences really warm to his theatrical approach. But if you are driven by seeing steps and danced movement define character and plot (which I generally am) then the pickings can seem very thin. The students give their all in a work very much about acting, and in the dance hall section I particularly liked Seren Williams as the redheaded femme fatale and Valerie Yeo as the the girl trying oh so hard to get her man (or any man!)

Of the other 6 works, two were classical. Carole Gable set the Pas de Trois from Paquita, to the famous Minkus. It might be rum-ti-tum, but when you’ve not heard any for a while it’s just wonderful to hear straightforward and emphatic tunes. And my goodness you need to be classically sharp to stay with it – the beat is all. Mai Ito impressed – sharp if yet to get all the elevation in jumps that she will. Kanami Sano also has classical winning ways, but Mark Samaras, like Ito, seems to be able to turn his hand easily to both contemporary and classical dance. Linda Moran’s Elan Vital, to Holst, was unashamedly classical simplicity rather than looking to break new ground. It seemed a typical school type of piece to show off the female students (10 in this case), pink clad, in a variety of textbook moves. It canters along, the students deliver the steps well and the audience like it. I’m the curmudgeon that wants more invention.

That leaves 4 contemporary works, all by female choreographers I’d note. Distinctions in dance are getting less relevant at times with Sara Matthews (the School’s Director, but still regularly choreographing) Superstruct featuring pointe shoes for the girls. But tradition this was not with Gellar coming up with chic see-through unisex costumes for the 3 couples. Originally made 11 years ago, it feels more modern if again there was a minimalist feel, this time with looser jazzy overtones and fast, pacy expansive movement and often the females leading. Also making a reappearance, and again using 3 couples dancing against a minimalist score channelling Philip Glass, was Mikaela Polley’s Ascent. And yet more arresting costumes by Richard Gellar – structured skirts in pure white for the females. It starts in silence and the movement seems moody and introverted before opening and cantering along to a very busy and rousing end.

Sharon Watson is the choreographing director of Phoenix Dance Theatre, and ‘the name’ choreographer creating for this year’s show. And in Repetition (2) Change Watson certainly delivered a piece out of the ordinary by taking its inspiration from DNA. The first version of this work, Repetition of Change was made on her own company in 2013 and Central inherited the wonderful tented unisex costumes of Lorna Clayton. The costumes are an integrated part of the dance, swirling and devouring space in a piece with a very sculpted and architectural feel. The movement is fresh and the very opposite of angular and grimy. In a show with much good work it was my joint hit of the of the night – joint with Leanne King’s Insinuare. My notes on Insinuare begin “classy” and “scrumptious”. It’s a contemporary duet originally created for last year’s BBC Young Dancer competition, but based on a 2013 Ballet Central piece for a larger group of dancers. Focusing on a couple gives it more impact and it’s morphed from a pleasant piece of movement to a work full of emotion and close fluid partnering. I so wanted to know the backstory being played out. No set, simple lighting and costumes, danced bare foot, all its success comes from the two dancers (Prima Tharathep and Joseph Vaughan) and the choreography, and that magnifies the power of it further. King, the school’s Contemporary and Choreography Tutor, creates movement that really connects with the audience and I was similarly impressed by her work on the 2014 tour (the very different in style Toots Goes to Charleston) and I only wish we could see more of her work outside the school. That said, it’s wonderful that students have dance tutors as talented as King, Carole Gable, Sara Matthews and the many others involved to set them well on their time-honoured way. 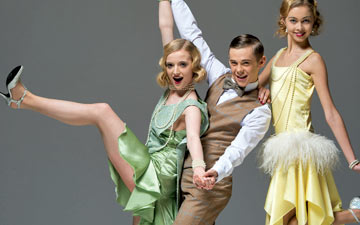 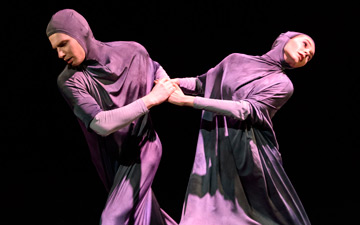