There are many pleasant contradictions nestling in the jumble of ideas and thoughts engaged by Ockham’s Razor, Britain’s leading contribution to the proliferation of circus theatre shows – many of which are by companies formed in Quebec or Australia – that has been a notable development of the last decade.

Tipping Point is both simple and complex. The ArtsDepot’s Pentland Theatre was reconfigured with scaffolding erected over a part of the auditorium where stalls’ seating would normally have been. Seating capacity was greatly reduced with the circle out-of-bounds and individual plastic chairs replacing the stalls. We entered a smoky atmosphere to the sound of tinkling piano music and the sight of scaffolding, erected like the frame of a large tent. It was redolent of a child’s playground and, true to this imagery; the five performers often appeared to be playing juvenile games, projecting a casualness that made it easy to forget the dangers inherent in their daredevil activity.

Their first task was to carry poles onto the set. One was fixed to a hook, several metres above the stage, and when a stopper was removed and the pole allowed to swing, the hollow interior released what I took to be salt (but may have been chalk dust), which by the law of physics then formed a perfect circle. Such a ring might be the arena for combat (sumo, boxing) but, here, it is very much a place of play.

Over a little more than an hour, these five extraordinary acrobats bring suspense and comedy to a series of episodes that are fuelled by personality, strength and balance. At the heart of it all, Alex Harvey – one of the company’s co-founders – provided a solid core to the complicated structural engineering of human muscle and steel that is needed to keep the other performers (literally) on their toes. He is the ironman aerialist, at one juncture held by a circle of cloth – folding him in half, like an inverted V; hanging from the top of the scaffold, while clasping Telma Pinto, as she flowed through an impressive aerial routine.

Pinto is also a Chinese Pole specialist, capable of managing extreme discipline in her skills while exuding the incongruous charisma of reckless abandon; Emily Nicholl is a hand-to-hand acrobat with astonishing balancing skill, whether held aloft on the palms of one of the guys, or balancing (incredibly) on the horizontal poles as they are rotated with accelerating speed, like the pistons of a steam train. Nick Galzin and Steve Ryan completed the cast with a rich mix of physical strength, attitude and humour. One exercise sees Ryan avoid five swinging poles, while blindfolded and following his colleague’s vocal instructions. It ends, of course, in a comedy moment that has the audience around me laughing out loud.

Tipping points are the denouement of each sequence with the performers inevitably holding balances at the very edge of going over. The show is cleverly structured into a base menu of group sequences, punctuated by duets and solos that exemplify individual skills through arresting routines. The acrobatic hand-to-hand work of Galzin, Ryan and Nicholl was especially effective.

The show’s focus on the pure skill of these aerial athletes and acrobats was a large part of its charm. The set was partly rigged by the performers themselves while the show progressed (Harvey is an acknowledged expert in equipment design and rigging). The bespoke musical composition by Adem Ilhan and Quinta provided a tranquil, softening effect to set against the impressive muscular physicality of the performers.

And, I loved the imagery. Simple mathematics and physical science made swinging poles – and I don’t mean groovy people from Warsaw – create attractive circular shapes through the laws of their movement. As the performers left the stage, one hollow pole was set on a trajectory that left it spinning in ever-changing arcs like a giant spirograph toy; with salt (or chalk dust) again spewing from the opened end to trace an outline of white elliptical galaxies on the black floor.

With a consistent run of successes in its repertoire, Ockham’s Razor (aided by their producers’ from Turtle Key Arts) seems to have found a recipe for creating unnervingly simple, absorbing, highly visual spectacles in a theatrical setting. Its performance strength may be in the air, but this is a company with its feet firmly on the ground. 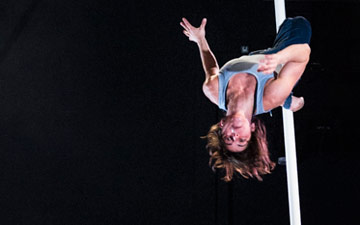