Derek Deane’s arena production of Swan Lake for English National Ballet returns to the Royal Albert Hall for the eighth run since its creation in 1997. It features 120 dancers including 60 swans and a handful of acrobats and jugglers. The company claim that over half a million people have seen this production and for many in the audience it is their first and possibly only viewing of the story of the queen turned swan by a sorcerer’s spell who might be rescued by a faithful lover.

This is by far the most successful of ENB’s in the round productions. It strives to be audience friendly and give the thousands of people almost surrounding the stage something to catch the eye whatever the angle.  The huge space needs big personalities to fill it, and strongly characterised performances from the leads to register.  Here the massed ranks of the swans are formidably drilled and the unity of the corps provides a thrilling and poetic vision, but the lead performances were at times muted.

This was Alina Cojocaru’s debut as Odette/ Odile in this particular production. At the beginning she was uncharacteristically cautious and tentative, only appearing to relax a little towards the end of the first lakeside scene. There wasn’t much chemistry between her and her Siegfried. He was a guest, Osiel Gouneo, Cuban-trained, currently dancing with Norwegian National Ballet. As a partner he paid her close attention. The lifts were smooth and effortless. Yet somehow this registered as skilful and professional partnering rather than the heady rapture of lovers.  Individual poses were lovely but some magic seemed to be missing. Both of them looked more convincing characters when dancing solo rather than together.

Since joining ENB, Cojocaru has not yet developed a regular fulfilling partnership with any individual dancer. Maybe further performances in this cavernous setting will let her blossom further. As Odile she is flirty and mischievous rather than malicious.  True evil doesn’t appear to be present in her soul.  In the ballroom scene she didn’t go for the all-out bravura you might expect from Odile.  Yet in the final scene back at the lake both of the leads found a deeper connection.

Gouneo is elegant with a very attractive unforced ease about his dancing. Nothing looks hurried or effortful.  His jumps are huge and airy and he received a big response from the audience for his dancing in the ballroom scene where he definitely made the most of the massive space available. He is a happy and relaxed prince in the opening scene until he is disconcerted by the demand of his mother (an icy and uncompromising Jane Haworth) that he must wed. Michael Coleman as the Tutor is a delight. He gives us a rounded character in just a few moments, kindly, flustered, affectionate but quite failing to grasp Siegfried’s uncertainty in the face of marriage.

James Streeter is an experienced Rothbart with excellent command of the huge wings that the character sports in this production. He had good rapport with Cojocaru as Odile.  In this production the lovers do not die: the force of their love, expressed in great soaring lifts above Rothbart, breaks the curse. He expires splendidly in a flurry of dry ice to return via the trapdoor from which he initially emerged.

Gavin Sutherland conducted and deserves special mention for how he and the ENB orchestra cope so well with the demands of the venue. The orchestra are on a platform thinly spread out on a wide ledge so not all players are in easy sightlines for him. Sutherland has his back to the performing area, yet manages to keep a firm grasp of what’s happening on stage, half turned to keep an eye on the White pas de deux in what must be a very tricky position.

How well does it work as your first Swan Lake?  Size and spectacle dominate here over storytelling.  There is hardly any attempt to explain why Odette is enchanted or how she can be freed. You need to read the programme for that. But there is compensation in the visual splendour and grandeur. A number of the traditional components have their numbers of dancers multiplied to engage different sections of the auditorium. So we have two groups of four cygnets, four leading swans instead of two, and a pas de douze as an expanded version of the pas de trois.  It means there is always something going on though as a spectator it can be hard to grasp all of the detail. The corps do their best to act as naturally as possible, the peasants of act 1 anxiously brushing down their dresses at the approach of the queen, though it may be that the gesture is lost to parts of the auditorium.  The costumes are colourful and elaborate and it’s refreshing see a Spanish dance which isn’t costumed in red.

The lakeside scenes are breath-taking. The arena is covered by dry ice lit to look like rolling waves. The flock of swans builds group by group, and when you think there can be no more to come then in comes another dozen. The numbers would mean nothing if they weren’t so impeccably schooled, so beautifully synchronised, breathing as one. The entire company looks strong and well disciplined. Ultimately it’s the vision of the swan maidens that you take away with you and are the unique selling point of this production. 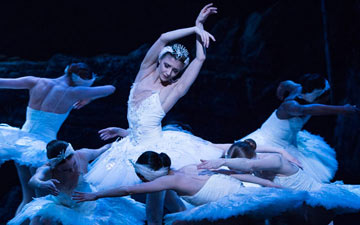 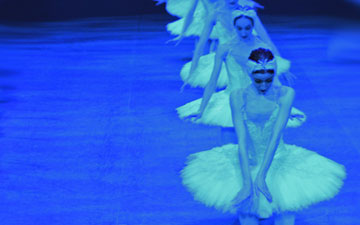 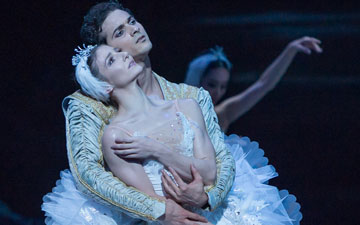 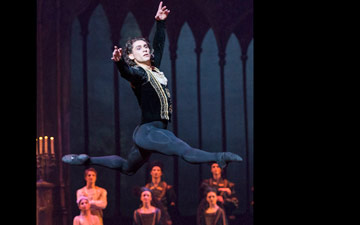