According to the programme notes for Yuri Grigorovich’s 2001 account of Swan Lake, his Prince Siegfried is a ‘ballet Lohengrin’ – a Knight of the White Swan. The production is all about him. Denis Rodkin, the opening night Siegfried, bursts into the court celebrations of his coming of age almost as soon as the curtains part. Costumed in white, lit by a white spotlight, he displays enchainements of male virtuoso steps in fine style before exiting to recover. The courtiers continue without him, animated by Vyacheslav Lopatin’s merry jester, here called The Fool. Instead of being an obtrusive irritant, Lopatin is a charmer with a formidable technique.

When Siegfried returns to accompany Nina Kaptsova and Kristina Kretova in the pas de trois, Rodkin (unlike his partners) dances as though looking into a mirror, admiring his elegant line. Maybe it’s his characterisation of the preoccupied prince, who appears to have no friends of his own age and a far from close relationship with his mother and her retinue of courtiers. She bestows a knighthood on him instead of presenting him with a crossbow. As the court disperses after a series of attractive dances, a drop cloth descends in the shape of an heraldic escutcheon bearing a black as well as a white swan.

This is Grigorovich’s interpretation, with the aid of his favourite designer, Simon Virsaladze, of Siegfried’s inner life. He is enticed by his Evil Genius (usually known as Von Rothbart) to enter a visionary realm of 32 swan-maidens, symbolising ideal love and beauty. The Evil Genius (Artemy Belyakov) is evidently Siegfried’s dark double, for the two of them perform the same choreography, circling the stage – there is no lake in this psychological landscape. The Swan Queen (Olga Smirnova) emerges without shaking water from her neck and arms on her entry.

Smirnova is indeed a vision of Odette, otherworldly in her yielding resilience, slender arms extended far back from her shoulders. When she extends a leg in a high attitude position, head and arms flung back, she assumes the shape of a preening swan. Smirnova only rarely poses, her movements constantly in flow, a bird-creature ready to take flight. She tells Odette’s vulnerable story without mime, compelling Siegfried to rescue her from some mysterious fate. Rodkin, entranced, is a discreet partner, enabling her to swoop and soar before his evil twin reclaims her.

After the interval, Siegfried is returned to reality in his mother’s court, entertained by aspiring brides – except he doesn’t stay around to watch their national dances. Each princess, Hungarian, Russian, Spanish, Neapolitan and Polish, dances a balletic version on pointe of folk-based choreography, accompanied by a single-sex back-up group. Only the Polish would-be fiançée has brought couples to amplify her mazurka. However soulfully the soloists perform, their dances to Tchaikovsky’s skilfully suggestive folk melodies provide little variety. Siegfried, reluctantly obliged to dance with princesses he has only just met, is soon distracted by the Evil Genius, who appears beneath the escutcheon drop cloth with six black swans and Odile, an alluring seductress. Her lilting music is usually associated with the sorrowful swan corps in the last act.

Since the cloth lifts for the Black Swan pas de deux, Odile is presumably real enough for the court to be able to be dazzled by her. Smirnova’s mesmerising Odile is close enough in the shapes she makes to resemble her Odette, though she is tantalisingly elusive. Rodkin’s solo variations repeat his earlier enchainements, revealing that he makes even the small linking steps as large as he can, eliminating any light and shade, however well he executes them. A tireless leaper, he is not a great spinner: nor is Smirnova, who just about managed sufficient swift fouettés to generate applause. Her virtues as an exquisite adagio dancer lie elsewhere than in party tricks.

No sooner has Siegfried sworn to love black Odile, betraying her white double, than he is transported to his inner world of swan-maidens. They are in mourning, protecting Smirnova’s Odette, the spirit of sorrow: her trailing arms seem to be weeping, her head bowed down in grief. Rodkin bounds in, as ever, in extravagant grands jetés to Siegfried’s heartfelt music of regret. Grigorovich is determined to ignore Tchaikovsky’s intentions, for he has Odette expire in the Evil Genius’s arms and Siegfried survive, bereft. Yet the music’s finale provides an apotheosis of assurance that love will triumph over death.

When Grigorovich first envisaged his ‘psychological’ interpretation of Swan Lake for the Bolshoi in 1969, he was apparently obliged by the Soviet authorities to provide a happy ending, so that audiences would leave cheered. Odette and Siegfried were united in life instead of the after-life, once evil Rothbart was destroyed. In this alternative version, heroic Siegfried presumably goes mad or bad, having lost his idealised inner world. It is hard to feel much for him, since Odette’s plight attracts all our sympathy, and the beautifully sustained quality of Smirnova’s dancing demands our admiration and respect. 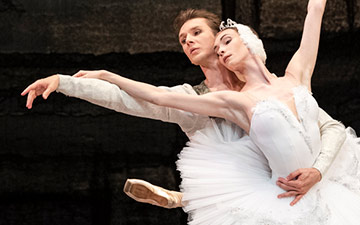 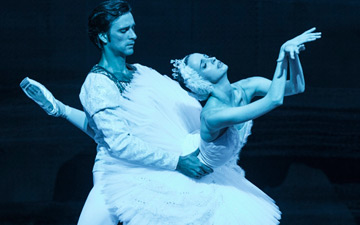 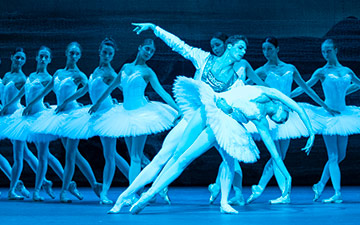