Jann Parry with an alternative view and detailed account of the Akram Khan Giselle for English National Ballet. See here the original and first review by Siobhan Murphy.

Akram Khan has almost succeeded in creating a timeless myth for Tamara Rojo’s English National Ballet company, a counterpart to its production of Giselle by Mary Skeaping. The two Giselles can be kept in the repertoire together, as the Paris Opera Ballet has done with its traditional productions and Mats Ek’s version, set in a lunatic asylum. To borrow from Wayne McGregor’s usage of ‘multiverse’ for his latest creation, these multi-Giselles are coterminous, alternative versions of each other; choose which you would prefer to experience, or switch between them.

Khan has reimagined the original 1841 libretto while retaining its universal themes of love and betrayal, madness and revenge. He hasn’t modernised it so much as translated the story from a bucolic setting to an industrial one. Grape-picking peasants have become garment workers, exploited as cheap labour for the benefit of a wealthy elite. You have to read the programme note by Khan’s dramaturg, Ruth Little, to discover that these are dispossessed migrant workers, outcasts desperate for a livelihood.

They besiege a high wall that excludes them from the privileged factory owners, living in luxury. The wall, scarred at human-height with handprints, is a potent symbol: it divides the haves and have-nots, the economic invaders and the privileged residents, the living and the dead. Outlines of hands on cave walls date back to prehistoric times, vestiges of early migrations. The huge partition will revolve for Act II to reveal an abandoned factory, haunted by the ghosts of women who have died there – as so many did in 2013 when a textile factory collapsed in Bangladesh.

Having established the context of his Giselle, thanks to Tim Yip’s setting and tattered costumes for the Outcasts, Khan introduces his leading characters. Tamara Rojo is readily identifiable as Giselle because she is a natural magnet for attention, beautiful and spirited. Albrecht (James Streeter) appears to be one of the workers. Hilarion (Cesar Corrales) is a conspicuous figure, perhaps an agitator. Again, you need to read the programme note to find out that both Albrecht and Hilarion are in disguise, able to cross the class barrier.

Vincenzo Lamagna’s music, mixing industrial sounds and percussive orchestration with quotations from Adolphe Adam’s original score, summons up an anthem for the migrants: it’s his version of the peasants’ dance in Act I – known to dancers as ‘Pushing up daisies, pushing up daisies…’ These garment workers perform their own vigorous folk dances, choreographed by Khan: they refer to the shuttling of a loom as well as the wheel pattern formed by the grape-harvesters, separating Giselle and Albrecht.

The first pas de deux for the mismatched lovers starts with their placing their hands on the wall, leaving their mark. Then, like Romeo and Juliet, they paddle palms. He touches her pregnant stomach and she strokes his face before swirling ecstatically in his arms. Rojo’s Giselle rejoices in first love; Streeter’s Albrecht is still a cypher; Coralles’s Hilarion glowers jealously.

A factory hooter blares – a modern echo of a hunting horn – as the wall rises to reveal the wealthy élite in their enclave. Yip has dressed them in fantastic garments that inhibit movement. The exception is Bathilde, gowned in expensive guipure lace. Giselle admires her own handiwork. Bathilde rewards her contemptuously with a glove that drops between them. We have no idea whether this might be a challenge because there’s been no signal that Abrecht has been two-timing both of them.

As the massed migrants dance defiantly, side-lining their oppressors, Hilarion is revealed as the devious stooge of Bathilde’s imperious father (Fabian Reimair). He and two ‘huntsmen’ are the ruling class’s enforcers. Hilarion somehow unmasks Albrecht’s deception: Bathilde’s reaction is hard to tell, since she has her back to the audience; Giselle falls to her knees in horrified denial, until she sees Bathilde reclaim her fiançé, arm in arm. The story-telling becomes perversely obscure as the workers surge across and about Giselle’s unravelling form. Brutal father and Hilarion, wearing his enforcer’s bowler hat, stalk around the heaving circle.

Giselle has a brief scene of despair, hearing the Wilis’ music, as she’s abandoned by her fellows. Father, his two henchmen and Bathilde command Hilarion to execute Giselle. I think. Impossible to see – why?

Act II takes place in a dusty mausoleum, dominated by the Miss Havisham figure of Myrtha (Stina Quagebeur). She wills Giselle’s corpse to life, wielding a bamboo stick instead of a myrtle branch. Its magic strength enables Giselle to support herself on pointe, like the sisterhood of Wilis. According to the programme, they are victims not of betrayal in love but avengers of those who injured them in industrial accidents. They are indeed an intimidating coven, thumping their bamboos staves and block shoes. They don’t dance much, apart from forming lines that shift in canon like the ballet blanc Wilis, whose music is sampled in this act.

The arrival of Hilarion, descending the wall like Orpheus into Hades, sends the Wilis into a flurry of familiar hops across the stage. He has come to seek forgiveness for what he was forced to do. (Easy to confuse him at first for Albrecht.) He is confronted by a furiously reproachful Giselle, who re-enacts her death for her fellow Wilis to witness. Hilarion is penitent, cradling her in sorrow – he truly loved her.  The role is a multi-layered one, compellingly danced by Coralles, who outshines under-written Albrecht.

Hilarion is sentenced to death by a thousand blows from the Wilis’ staves. (Bamboo staves also appear in Khan’s Until the Lions, where they are used by female warriors from Indian mythology.) Albrecht appears, unnoticed in the drama of Hilarion’s mass murder. He now has to prove that his life is worth saving. His encounter with Giselle has many references to the famous white act pas de deux in which Giselle is an elusive vision. When she allows him to see her face to face, he lies down in surrender. She stands on him and is lifted in a crouched position, wrapping her legs around his middle, an image of trust that Khan has used before in Dust for ENB and in his duet with Sylvie Guillem.

Giselle’s resolve to spare Albrecht a dreadful fate has to withstand Myrthe’s implacable will (Quagebeur icily unyielding, towering on pointe). Fading fast in Albrecht’s arms, Giselle has just enough strength to impale herself on one end of her stave and Myrthe on the other.  They vanish into darkness and the wall returns to shut Albrecht out from the underworld. All he has left are Giselle’s handprints, among a myriad others.

The ending is affecting but frustrating because the performers’ faces are scarcely visible in the gloom. Far too often, what should be key reactions are hidden from view.  Khan is superb at organising mass effects through moving bodies, with memorable images of machinery or panicked animal unrest. ENB’s dancers inhabit their roles with utter conviction. Rojo in particular brings her experience of dancing ‘traditional’ Giselle productions to her agonised portrayal of this wronged young migrant. But Ruth Little as the overseeing dramaturg should have realised that audiences, already in the dark, need guidance in following a story – even one as well known to ballet goers as that of Giselle. 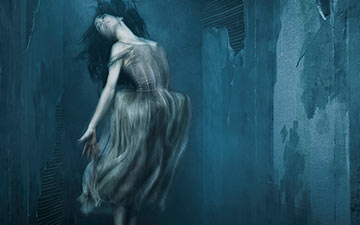 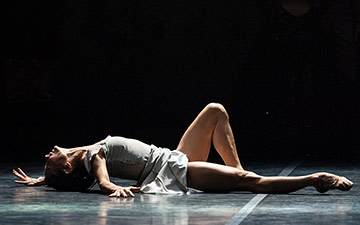