In 2014, Sadler’s Wells New Wave Associate Artist Hetain Patel debuted American Boy, a one-man show that confronts pop culture and its influence, both personal and cultural. Its sequel, American Man, sets racism and sexism in its sights – “somewhat contradictory” subjects for Patel, he noted in his follow-up talk to Thursday’s performance, considering the marginalisation he faces as a member of an ethnic minority and the privilege he enjoys as a man. The new show is also concerned with identity politics and the internet’s role in shaping cultural norms.

Patel tackles these through a 50-minute montage of satirical sketches set in the age of ‘IYouTube2.0’, a near-ish future in which tech companies can reorganise organic matter to process digital information, sidestepping computers and delivering their goods straight to the human body. He reels off YouTube videos, infomercials, political broadcasts and more, peppering them with witty impersonations and choreography that deftly avails itself of his lanky frame.

One of the funniest scenes sees him skewer toxic masculinity through a macho instructional video revealing “alpha male secrets” like how to signal virility and dominance through your posture. Other highlights include a promo for a white skin-suit (“Why drown in brown when you can dress for success?”), a bungled introduction for a female head of state (“Pretty and capable – she really has achieved so much for a woman!”), and a comic riff reversing the two halves of ‘Caucasian’.

Not all the quips land, though, and a fair few of the sketches lack clarity, sitting awkwardly amid their neighbours – a jokey rendition of Salt-N-Pepa’s “Shoop,” for example, as well as a single, random quote from Disney’s Frozen (“Hi I’m Olaf, and I like warm hugs!”). The most inexplicable thread is Patel’s recurring Obama character, imagined as the new CEO of Apple and, in kill-your-idols spirit, a purveyor of noxious advice, such as a three-step programme for corporate-sponsored misogyny (pretend you’re a feminist, hire insecure women, make their work lives so terrible they’d rather stay home with their children, “where they belong”). Like an earlier speech about the oppression of authenticity, which culminates in a bizarre tangent about Hitler, it’s a scene that prioritises provocation over substance.

In any case, Patel is a talented physical comic, jerking and gesturing wildly to amp up the farce, and shifting fluidly between voices, accents, impressions and even languages (one segment takes place entirely in Gujarati). His choreography reveals a sound grip on body language and its emotive potential, particularly in the darker sketches, where he prowls and writhes aggressively. Still, the subjects, vehicles and general objectives of his ridicule could all stand to be probed deeper. 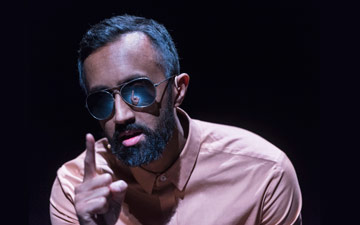 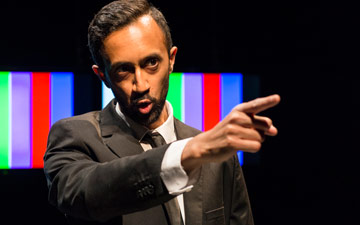 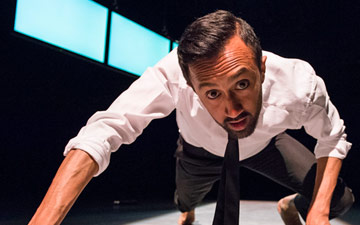 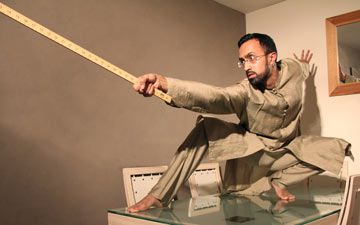