Some titles for triple bills can be generic or aspirational rather than specific, but Ham and Passion is exactly what you get in this programme from DeNada Dance Theatre.  The titular leg of fine Spanish pork (complete with trotter) appears in each piece as an object feared or celebrated, and inflamed passions, sexual or otherwise, fulfilled and/or frustrated also figure in all three of the works.

DeNada Dance Theatre presents the work of their Artistic Director, the choreographer Carlos Pons Guerra. There is a strong flavour of Spain to the evening, a Catholic 30s Spain of repression and forbidden desires, reinforced by a fascinatingly eclectic soundtrack including songs of the period. If you understand the language, no doubt the music and lyrics provide greater resonances, but if not it is still atmospheric.

Guerra has a highly flavoured view of the world to impart, very camp, extremely mischievous, teasing and barbed.  He plays extensively with gender. The first piece, Passionaria is a solo about a drag artiste in 1930s Spain, danced by a man; the second revisits Cocteau’s Le Jeune Homme et la Mort but with two women portraying men as the protagonists, and O Maria involves the Virgin Mary (danced by a man) appearing to a troubled couple and whose gender roles are then subverted.

The most successful piece of the evening is the shortest and most concise, Young Man! Guerra says in his programme note he has based this on Cocteau’s libretto for Roland Petit’s ballet, Le Jeune Homme et la Mort, and there are obvious references to it, the opening with the bored protagonist smoking while waiting for (Death) the lover, the dungarees, the table and chairs. But he manages to turn all this on its head by using the dancers Marivi Da Silva and Antonette Dayrit to portray two men and their attraction and repulsion.

Da Silva was nominated in the 2016 National Dance Awards for her performance in this work and it’s easy to see why. She has force, macho swagger, charisma and unnerving, sidling seductive dominance. It’s not often women have the chance to be big, aggressive, forceful creatures. She and Davrit entangle, slither, slide and grapple. Guerra is remarkably imaginative in presenting a masculine view of lust, disgust and sadness transmitted via female bodies. But you really wouldn’t fancy eating that ham after it had been used for various ancillary purposes. Death in a yellow T shirt wins out at the close.

That piece works well by giving us a relatively easy to follow narrative and a short time span of 15 minutes. The other works on the bill are more diffuse and have less impact, though they have their moments.  The opening work, Passionaria, is a long solo for Fabio Dolce, clad in a floral dressing gown, in a reflective mood as he prepares to put on his make-up and outfit.  Much of this seemed too introverted, with little movement, and the dancer’s back to the audience, though it did display his beautiful hands. At last, mind made up, wigged and gowned he stabs the ham and leaves.  The ham can stand for a judgemental on Spanish society, or you might want to infer a more narrative interpretation. Those sitting behind me thought it symbolised a faithless lover. It’s up to you.

O Maria would really seem quite bonkers if presented first on the bill. And it is fairly bonkers, but at least the earlier works have given you an idea of where Guerra is coming from, and what surprises might be in store. Da Silva and Davrit are evidently a not very happy couple, literally tied by a marital knot.  Suddenly Dolce appears from a heap of clothes (a nice detail, considering Wilton’s history as a warehouse for rags) as a vision of the Virgin Mary in a blue veil and liberates them from their roles. This has some very funny moments and entertainingly strange musical choices, including a snippet from Giselle, which gave rise to giggles. But the work feels overlong.  Guerra is well served by his dancers in all three pieces, and they launch into their male or female roles with absolute commitment.  The ham is carried on with them for the final bows.

There are pluses and minuses to seeing this programme at Wilton’s. The Music Hall is a wonderful relic, famously saved from ruin and full of all kinds of dusty nooks and crannies. Here the stage for this programme is constructed on two levels, with four steps between, with most of the action on the upper level. But sight lines are not great while looking up at the higher stage and for a while an open suitcase managed to significantly obscure the performer in the first work. Other productions here have coped better with constraints of the place.

This production in London begins the company’s tour which continues through to April including Exeter, Salford, Swindon and Lincoln. If you like your dance heated and highly spiced, this could be for you. 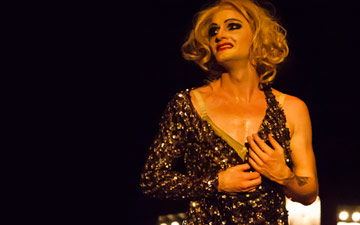 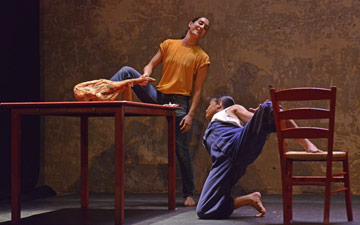 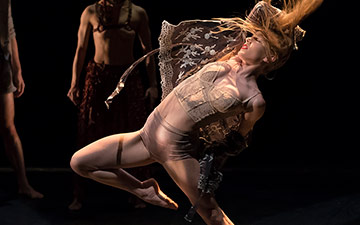 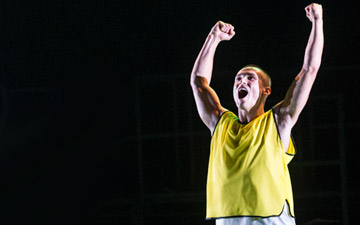