The one thing you can be assured of when you step over the threshold of the Place’s Resolution season is surprise. Billed as the festival of new dance by emerging artists, the surprise can range from the bewilderingly ill-conceived efforts of some through to spotting major talents on their way up. The poster boy of Resolution is Wayne McGregor, but there are many others who have passed through and taken advantage of the space and support to do new things their way. This year there were 80 works on display, mostly presented in triple bills. I could only get to one show, but it was full of (surprising) variety from a dramatic period work, through a brave solo statement to a duet involving live and recorded dance. I’m not sure if I’ve seen the next “big dance cheese” in any of this but I did see some interesting and thoughtful dance footprints made and will follow their respective paths onwards with interest.

Cecilia Watts was unveiling her new company (Watts Dance) in WLA No.657005 – a cryptic title for a dramatic piece about a gang of Second World War Woman’s Land Army volunteers. It was an ambitious work for 5 dancers in meticulously observed period costumes and featuring a custom score played live on the night – as announcements of arrival go that’s all pretty full on. I love it that Watts looked to tell a story in her 20 minutes and you could clearly see the group of ‘Land Girls’ pulling together in the highs and lows of hard manual labour, the good times of one girl and the poignancy of saying goodbye and losing those you are close to. The backbone of the work was pianist Robin Porter’s arrangement of mainly Andrews Sisters’ tunes (plus his own contribution), and it was those and the costumes that linger most in mind and well supported the dancing. Choreographically it did enough (if it closed out rather weakly), but nurtured on vernacular works like this, by Christopher Bruce, I wanted a bit more personality from the movement. Which is unfair on a first piece of course. Watts has marked her directorial card well – only time will tell if she is a strong choreographer as well or the person with the vision to bring others together and make wonderful new things happen on a stage.

Reviewing John Livingston isn’t easy and perhaps the greatest gift he brings is to make you think about disability, performance and personal triumphs. His provocatively titled Am I a Waste of Space? features neither particularly strong movement or particularly strong choreography, but when you add in that he has Down’s Syndrome it throws a very different perspective around what you see. Perhaps it shouldn’t and one just judges what one sees? At the Place he improvised to three powerful tracks ranging from Purcell to Bjork and he did so competently and cleanly for the most part. But it didn’t thrill me particularly as new contemporary dance and seemed much more about Livingston making his own 20 minute noodling statement. It was a personal triumph – or I hope it was. I’d really like to see what a class choreographer could pull out of Livingston – and to get to a point where his disability is not of artistic consequence.

Last up was the most intriguing piece of the night: Alice Weber and Ben Saffer’s Inter/action which had Weber dancing with a film version of herself. At first you think it’s a live relay, but then you see it is pre-recorded film and and they gently spark off one another, sometimes mirroring and sometimes not. Way before their capering play outstays its welcome Inter/action picks up a gear with the introduction of Merritt Millman dancing in a black costume to Weber’s white and as the colours suggest there’s a clash of wills. All up, it packed a lot into 15 minutes if I’m not really sure I got all I might have from it and the cliched video of flower buds developing seemed oddly out of place – if absorbing just for themselves. 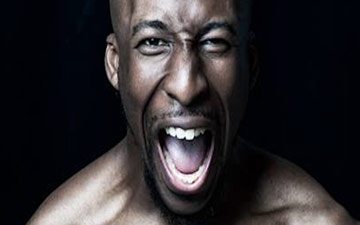 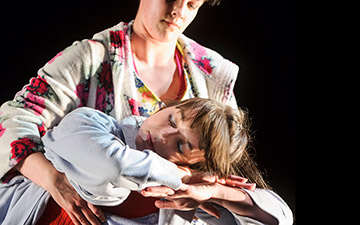 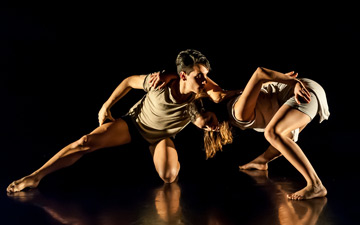 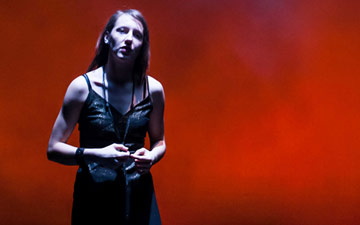 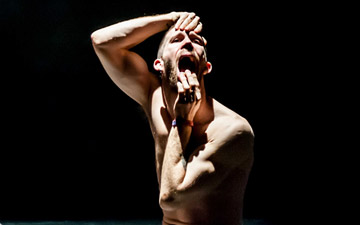