“The Under-25s know about it; the Over-25s, don’t”. Rosie Kay, choreographer and director of MK Ultra, saved my blushes with this brief expose of the generational division occasioned by her latest work. I can now confess, without humiliation, that I first thought it to be about a new town in Buckinghamshire, commonly abbreviated to MK, as in MK Dons. It had even occurred to me that MK Ultra could be the new name for that football club!

It is actually one of several codenames for a mind control programme operated by the CIA, over twenty years, from the early 1950s, involving, for example, the use of pyscho-active drugs and hypnosis. This is not, in itself, the history that the U-25s know about, rather the legacy of mind control and fake news that has fed countless internet conspiracy theories about modern-day Illuminati, initially led by Walt Disney and, latterly, involving a host of pop stars, including Britney Spears, Beyoncé, Lady Gaga, Kanye West and Eminem.

Disney is alleged to have used his films to control the thoughts of the youth of several generations and any pop video featuring butterflies or a black-and-white chequered floor has – apparently – a hidden motive of identifying the protagonist as being of the Illuminati. There are many other codes, besides. The conspiratorial list is endless: according to some, poor Britney was actually decapitated in a car crash, ironically around the time of Hit Me One More Time, and she has subsequently been replaced by several clones across the intervening years! This is the stuff that the U-25s know all about, apparently… and, to be honest; they’re welcome to the exclusivity of that knowledge!

It seems a tricky subject for dance alone to tackle and Kay has teamed up (thanks to an introduction by dance critic, Luke Jennings) with the TV journalist, Adam Curtis, to create a work that is part-documentary, part-dance theatre. That it succeeds so well has much to do with the way in which film, spoken word and dance is all tied together in an impressively glossy, visual aesthetic; emphasised and highly exaggerated by excellent set and costume designs. The set, by Louis Price, incorporates a triangular screen for the film projection, hinged to a similar reflection on the highly polished floor (pyramids also being a sign of the Illuminati); and Gary Card’s extraordinary costume designs (hand-printed by Nicola Killeen onto one-piece bodysuits, made by Sasha Keir) were integral additions to the set, each possessing further imagery to confirm the coded mind games that suffused the work.

Kay is a choreographer who immerses herself in the subject. She did everything short of actually enlisting to get under the skin of the military for 5 Soldiers; and MK Ultra is also the product of three years’ intensive research. She has an uncanny eye for topicality, releasing MK Ultra as an artistic exploration of ‘fake news’ and ‘alternative facts’ just at a time when these concepts are given global credence, thanks to the Donald. The associated facts of Trump being named after Disney’s famous duck and that his presidential predecessor is alleged, in some websites, to be the number one Illuminati, add even more theory to the conspiracy.

There are limitations to the movement palette suggested by a combination of pop videos and celebrity meltdowns: one extract of Curtis’ documentary showed a clearly distressed Spears searching for a lost memory card in what appeared to be an underground car park, surrounded by paparazzi; the theory being that her mental health was deteriorating because she was fighting against her “programming” (allegedly having taken place while she was a child star in the Disney Club). Despite the limitations of the source material, Kay’s choreography – enveloping strutting steps, jazzy accents, sensual, accusatory poses, heavy back-bends and vacant stares – exaggerated the commercial dance spectrum of the pop industry, very well.

Eighteen months’, or so, ago, Lea Anderson dissected some of the routines of the eponymous ‘70s Top of the Pops dancers, in her enigmatic Pan’s People Project, reconfiguring them in heavily characterised, but entirely new, choreography. I doubt that Anderson ever contemplated Babs & Co (or even, Legs & Co) as agents of the Illuminati; but her pop-infused style of contemporary choreography (and eclectic choice of costume) had a similar high-end impact.

Kay’s seven dancers made for an exciting ensemble of the mind-controlled, none more so than the central figure of Shelley Eva Haden; her blonde ponytail and precocious sensuality seeming to mimic many routines and poses from Spears’ earlier pop videos (oh, yes, I’m an expert!).

The constant interruptions of the documentary film and its associated voiceovers were perhaps a little over-killed with the same or similar points, hammered home for exaggerated impact. The added value came in the interjection of a series of interviews with the young people of Wolverhampton, candidly discussing their understanding of the Illuminati and its internecine grip on modern society through pop culture. It proved Kay’s assertion about the generation gap in terms of understanding these issues by illuminating the Illuminati in genuine vox pox from this side of the Atlantic.

As for me, well, Kay has produced a visually exciting and sexy work based on a theory that is all clearly nonsense. The next thing they’ll have us believe is that Walt Disney has been cryogenically frozen. Or, even that an episode of The Simpsons predicted that Donald Trump would become President. One might also consider the coded reason why this review contains 911 words? 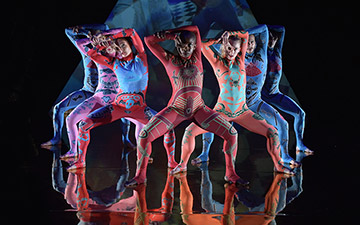 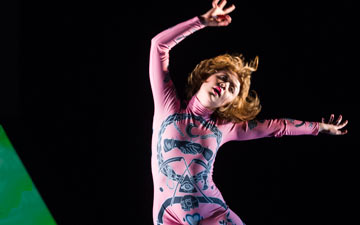 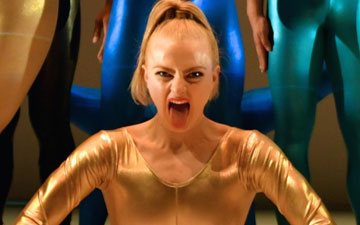