The question Rosie Kay has to answer at the Q&A session after 5 Soldiers is the nature of her association with the British Army. Is the show part of a recruitment campaign? On this autumn tour (as at the Edinburgh Festival Fringe last month), it takes place in army quarters, with soldiers in military fatigues acting as ushers.  It is part of the army’s arts programme – Lt. Colonel Sue Wright, the army’s first arts officer, took part in the live screening post-show talk.

Kay’s answer is that she came up with the idea for the piece on her own initiative in 2010, after suffering a severe knee injury during a dance performance. She started wondering what it must be like for soldiers to have an injury that threatened their careers. In her research, she was given privileged access to army training exercises and rehabilitation centres. She wanted to understand soldiers’ experiences and to reflect them back to theatre-goers and web-watchers, as well as to armed forces’ families. This tour is supported by Sadler’s Wells and The Space Arts, in addition to the British Army.

I saw the recent London press night with just four performers and the live screening with five. Oliver Russell’s injury prevented him from appearing, so he was replaced at short notice by Sean Marcs, a member of an earlier cast. Kay is used to dealing with reduced numbers on previous tours, so the only difference was that the role of the officer (Reece Causton) was less commanding, since he merged with the other three – Duncan Anderson, Luke Bradshaw and Harriet Ellis, the lone woman.

Seeing the performance in close proximity to the dancers on three sides of a square makes you aware of their physicality and stamina, and their reliance on each other. Excellent camera work for the live screening reveals every detail of their facial expressions and accumulated sweat. A soundscore by Annie Mahtani emphasises the theatricality of the piece, heightening the growing tension.

After about 10 minutes of concentrated drill routines, individuals briefly break away. Double-time marching, boots drumming on the parade ground, diminishes to small robotic steps. Military games – playing dead, mock torture, hurling tyres at each other – give way to off-duty entertainment at night. While the men carouse like video dancers to pop music, Ellis enjoys time to herself in a corner, grooming her hair and limbs.  She stretches her legs voluptuously, displaying them like weapons, sexual and martial.

This section is where Kay sets out to examine the sexual dynamics in a tightly-knit group of young, extremely fit people – a company of soldiers or dancers. Up until now, the movement, drill routines apart, has been mostly rough and tumble. Ellis’s solo, however, is a form of acrobatic ballet, with her legs extended as far apart as they will go. At first unaware of the men watching her, she becomes provocative, conflicted, as they stalk her.

They, too, are conflicted in their responses. As ballet-goers will recognise, they treat her like one of Kenneth MacMillan’s madonna/whores, lifting her lustily between them. They seat her on their shoulders, parading her like a queen on a throne, then cradle her tenderly like a child. She represents the wives and girlfriends they have left behind, as well as the vulnerable comrade they instinctively want to protect.

She selects the one she fancies (Bradshaw) for a duet in which a tyre serves as an outsize tutu. Ellis is a charmer, resolute, tough and anxiously hopeful. She and blunt, dreamy Bradshaw accomplish the duet’s taxing grapples with gymnastic grace. Camera close-ups reveal that the officer, Causton, watches enviously before putting an end to the encounter. He then engages in a wrestling bout with Anderson, both with their shirts removed. Camera shots dwell on their gleaming torsos and clasping hand-holds. Sex and violence are never far apart in a physically fraught environment. Nor is mental instability – Anderson threatens to run amok with his rifle until he is forcefully restrained.

No actual weapons are used in the show. Kay felt replica guns would be cumbersome, deflecting attention from the soldiers’ bodies and actions. In the next section, when the troop is engaged in warfare, the five members mime manoeuvres of covering each other as they patrol against an unseen enemy.  They have been parachuted down from a helicopter in a sky diving sequences, arms outstretched in an inward facing circle.

In the eerie calm before battle, Kay has them appear to be flying angels, holding Ellis aloft as baroque music lays (Pergolesi’s Stabat Mater). Although an effective device, it’s been used in many requiem ballets, as has the lifting of a doomed figure in a cruciform position. By combining realistic action with symbolic imagery, Kay undermines the originality of her approach, in which detailed observation plays such an important part.

In a stunning visual coup, however, the confusion in the search for hidden danger erupts when Anderson suddenly spins on the spot, arms gyrating like helicopter blades. He is hurled to the ground, writhing and shaking. He’s been blown up. His comrades rush to his aid – but they would never treat an injured person in this fashion. They are kitting him up for the final, devastating scene.

He is now a double amputee, legs trussed up behind him so that he has to struggle to walk on his knees. He fights to march upright, still a young soldier. His mates turn away, waiting to resume their duties, knowing he can no longer be one of them. Close-ups of their expressions show their stifled emotions. Spectators in the Drill Hall focus on the defiant young soldier, facing an uncertain future.

His plight is the culmination of the piece, the bitter truth to which Kay has been leading her audience. The physicality of 5 Soldiers during the hour-long performance brings home the breaking of bodies; the potential breaking of spirits will have to be dealt with in rehabilitation. The dancers’ commitment conveys the soldiers’ experience without needing to use words – though they are highly articulate in post-show discussions. Audience members share their performance viscerally, whatever they may feel about the morality of war. 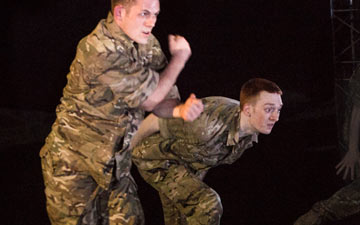 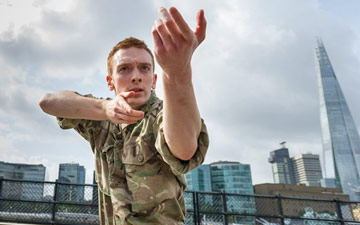 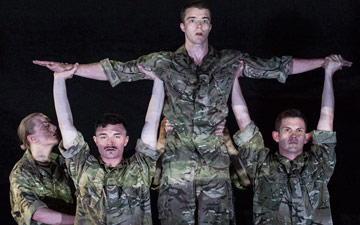