Marius Petipa was a seasoned ballet master, having spent nearly 30 years at St. Petersburg’s Mariinsky Ballet, when he created one of his crown jewels, La Bayadѐre, in 1877. With its oriental flair, impressive stage décor, and multitude of characters, his Bayadѐre is an extravagant spectacle on a grand scale, which faithfully follows the choreographer’s usual template: a betrayal scene, a vision scene, and a scene of reunion and reconciliation between the central heroine and her lover. It also contains one of the most celebrated – and transcendent – scenes in the 19th century classical canon. Known as The Kingdom of the Shades, this moment happens at the beginning of Act III, in the pure classical part of the ballet, when a procession of 32 ballerinas in white tutues flood the stage with serenity and pathos, dancing with seamless unison and creating a vision of unparallel beauty and spiritual grace. For this single moment of balletic perfection, we can forgive all the frivolous things this three-hour production has to offer, including its pseudo-exotic setting, exaggerated drama and outlandish props, complete with a stuffed tiger, an enormous fake elephant and a poisonous snake.

Since its creation 140 years ago, La Bayadѐre has been one of the Mariinsky Ballet’s calling cards and the Russian company can make this enduring classic shine in all its stylistic glory and theatrical splendor. It is to the great credit of the Mariinsky dancers that they treat this piece with utmost respect and seriousness, immersing themselves in the story’s improbable events and its high-octane melodrama with unshakable dedication and candor. They determinedly believe in the plight of the title character (and all the ensuing razzle-dazzle) and so does the audience. There was never a dull moment during the Mariinsky Ballet’s opening night performance of La Bayadѐre at the Kennedy Center Opera House on October 17.

Dancing with a cool and formidable manner, Viktoria Tereshkina brought authority and technical exactitude to the role of Nikiya, the beautiful temple dancer of the title. A wonderfully supple and expressive dancer, she shaped every gesture, every step with impeccable clarity and care; her precision was flawless, her sinuous movement mesmerizing. And yet she looked too cold and emotionally aloof to properly convey the warmth, loveliness, and holiness of her heroine. Only for a brief moment, when she danced with her beloved Solor in the ballet’s first act, did a hint of a smile crossed her face. If her heroine was consumed by love and devastated by her lover’s subsequent betrayal, she didn’t show it. This Nikiya oozed revenge and fury more vividly than romantic longing; her fearless fight with the treacherous Gamzatti proved the most theatrically effective moment of her performance during the first two acts. But Tereshkina’s somber demeanor suited her character well in the ballet’s final act. As a spectral Shade, she was compelling in both character and dancing.

The young Korean dancer, Kimin Kim, danced the role of the duplicitous Solor, a noble warrior caught in a fatal game of love and prestige. Slim and tall, Kim is a charming, highly engaging and watchable dancer. With his eloquent style, his Solor – charismatic, graceful, sensitive – looked more like a poet than a military man. Not for a second did I believe that this Solor was capable of killing a tiger. Yet Kim’s pyrotechnics, especially his soaring and effortless leaps, proved a thing of wonder. His dramatic skills came across as somewhat muted. Nevertheless, his hero looked appropriately tormented when Nikiya was killed at the order of his cruel fiancée, Gamzatti; and he was visibly drenched in remorse during Solor’s emotional reconciliation with his departed beloved in the ballet’s finale.

As Gamzatti, Anastasia Matvienko was glamorous and seductive – a stark contrast to Tereshkina’s stern and listless Nikiya. But her expressive range was limited and there was little to suggest Gamzatti’s love and jealously in Matvienko’s performance. And technically she wasn’t powerful enough to unleash all the magnificent sparkles of her variation in the second act’s Grand Pas Classique.

Soslan Kulaev as the lustful High Brahmin, however, was bland and unremarkable, his performance a far cry from that of Vladimir Ponamarev, who graced the stage of the Opera House in this role, when the Mariinsky Ballet last brought La Bayadѐre to the Kennedy Center in 2008. Then, forgive the digression, Ponamarev’s potent dramatic acting fueled the whole proceeding of Act I. In one memorable episode, when his forlorn and rejected Brahmin took his jewel-incrusted head piece and handed it to Nikiya as if saying, “In return for you love, take everything I have,” a whole universe of emotions – desire, desperation, regret, shame, and hope – were reflected in that single gesture.

The ballet’s assorted ensembles, featuring tantalizing temple dancers, slaves, royal courtiers, monks, and soldiers, were as colorful as they were engaging. But most of all the famed Kingdom of the Shades act didn’t disappoint – the company’s celebrated female corps de ballet was in excellent form. Here, stripping the scenery and costumes of all the colors we were left with harmony, purity, unity and grace. It doesn’t get better. 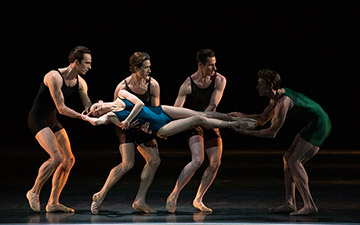 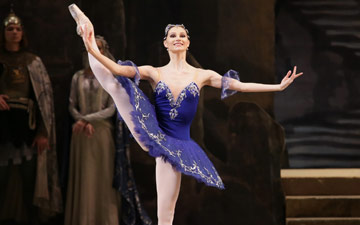 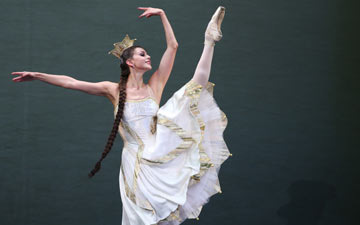