Amongst countless versions of Swan Lake, there are those that stick to fairy tale, with or without a happy ending; while others delve into the psychology of the whole “shooting match” being either the product of a depressed Prince’s fertile imagination; or the schizophrenic mania of the ballerina. Siegfried has been gay; he’s been asleep; he’s been traumatised by the childhood discovery of a dead swan; he’s even been secretly besotted with Odile, the whole time! One would have thought that, by now, there could be no new take on Swan Lake; but, then, there is Michael Keegan-Dolan.

Having torn up his Fabulous Beast Dance Theatre, at the height of its success, and burnt all the memorabilia from that era, Keegan-Dolan returned from his brief dance exile to start again with Teaċ Damsa (the House of Dance). His highly personal interpretation of Swan Lake continues from where Fabulous Beast left off, not least in locating the story in the Irish Midlands, specifically in the county of Longford, where the director and choreographer has long been based. This geographic and cultural idiosyncrasy places his Swan Lake firmly in a continuum of Keegan-Dolan’s best-loved works – including Giselle, The Bull, and James Son of James – drawing inspiration, as always, from local legends and landscapes.

This is Swan Lake in name only. There is no Tchaikovsky (instead the score, by a Dublin-based folk trio, Slow Moving Clouds, is deeply-rooted in the Irish heartland) and there are no tutus (albeit that swan plumage has a significant impact; more of which, later). There is no-one called Odette, Odile, Siegfried or Rothbart, although there are several characters called McLoughlin, all played by Mikel Murfi, a tour de force in each of many guises.

The “Prince” is a 36 year-old man, called Jimmy O’Reilly (Alexander Leonhartsberger), suffering from severe depression, following the death of his father; an illness worsened by his mother’s decision to sacrifice the family home for a council grant to build another; plus her insistence that he choose a bride from the motley assortment of “girls” (some bearded) that she invites to his birthday party. This strange “ball”, plus her choice of birthday present (his father’s old rifle, rather than a crossbow), are two of the clearest points of reference back to the traditional Swan Lake.

Murfi begins the work – before the audience has entered the theatre – bespectacled and tethered by a noose, dressed only in a grubby pair of y-fronts, while bleating like a goat for several minutes. Three holy men, dressed in black, with wide-rimmed hats, eventually arrive to dance around the frightened “beast” before throwing him/it to the ground; washing, drying and dressing Murfi so that he can narrate the tale, which he will do only after being served a cup of tea and another cigarette.

Murfi doesn’t dance. He sits out the few group dance sequences but he is the core of the show, most memorably in a conversation with himself when McLoughlin, the crooked politician, asks McLoughlin, the hapless police sergeant, to arrest Jimmy because of his errant behaviour (he doesn’t turn up for a promotional photo and when the politician goes to fetch him, Jimmy unwittingly points the rifle at him).

Instead of hunting a swan, Jimmy is saved by one, swooping to deter him when he attempts to use his father’s rifle to blow his brains out by the side of the murky lake (unimaginatively portrayed by a large sheet of plastic). Keegan-Dolan draws heavily from the Irish legend of the Children of Lir (Clann Lir), in which four children are turned into swans by their father’s jealous new wife. In this revision, the name of the girl, Fionnuala, is modernised into Finola and her three brothers become sisters. Keegan-Dolan has also plundered real-life incidents to add local colour: including the Longford siege of 2000 when a man suffering from depression and other psychiatric illnesses was shot dead by the Garda’s emergency response team; and the several instances of abuse by those in religious authority is reflected here by the Priest (Murfi, again) allowing his lust for Finola to escalate into violence when she rejects his advances.

As Finola, Rachel Poirier enjoys two sensual and emotional duets with Leonhartsberger’s directionless Jimmy, reflecting the iconic pas de deux of any traditional Swan Lake, excepting that these are both essentially slow-moving adagios. In these duets and the group dance sequences, Keegan-Dolan’s choreography is unusual and absorbing; but the dance is really no more than a supporting element to this highly theatrical show.

The mother, Nancy O’Reilly, is played by Elizabeth Cameron Dalman. This extraordinary woman founded Australian Dance Theatre more than fifty years’ ago (she was born in 1934) and although spending much of the show in a wheelchair, she leaves it to dance in the disciplined mania of the group finale, looking as spritely and rhythmic as any other performer.

Set against many such highlights, there were also periods where I found the momentum to flag; where the clarity of intent became ambiguous to the detriment of the narrative flow; and where the desperate darkness of the work became depressing for more than just Jimmy.

The final scene is a memorable slice of tanztheater, with the cast throwing, fanning and kicking white feathers everywhere, covering not just the stage, but also the front rows of the stalls, in a snowscape of white down. Not great, one assumes, if any of the audience were to be allergic to feathers (as many people are). I’m OK with feathers but susceptible to cigarette smoke. One understands that from time-to-time, a character lighting-up on stage adds realism, but chain-smoking, in these times (when smoking in public places has been banned for a decade), is unnecessary. I prefer my dance to be taken without a side order of nausea. 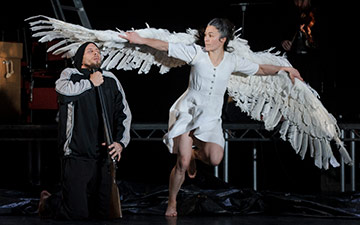 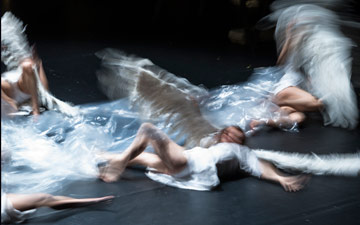 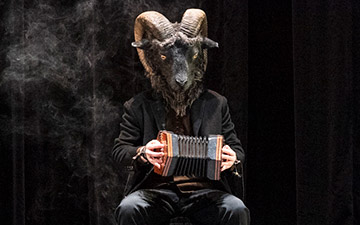