Yo Carmen was originally billed as a radical reimagining of Bizet’s opera and that’s not exactly the case. Don’t go along to this thinking that you will see any representation of the story with gypsies and bullfighters, or any male characters dancing. What is presented here is multiple views of who Carmen might be, rethought by Pagés from a female viewpoint, and her wider reflections on being a woman.

Snatches of music from the opera surface from time to time, interspersed with bursts of flamenco music and song. Alas, although the authors of the text are credited in detail (an interesting and eclectic bunch of names including Margaret Attwood and Marguerite Youcenar) there is no translation available which might have made this a much richer experience for the English viewer.

Pagés gives us what may be many different Carmens.  A scene which seemed to encapsulate her approach came quite late in the 80-minute work. She poses before a mirror and begins to dress in the sort of showy costume that we might expect of a Carmen character – long ruffled skirt, big earrings, long necklace, gaudy red and gold coat, and tall gold headdress. She scrutinises herself in the mirror and rejects the entire image. No, this is not the Carmen that she wants to portray. She systematically strips off the accoutrements and then gives us a burst of dancing – powerful, dignified and resolute movement.  The women who interest her don’t dress or act to please a male gaze.

Pagés is supported by a corps of seven women. All we see of them in the opening section is their fans, picked out of the dark and almost given a life of their own by lighting designer Pau Fullana.  But soon the dancers emerge from the dark and hammer the floor with their heels as if it’s the body of a faithless lover.

There’s some unusual props here. Aprons, brooms and feather dusters descend from above, and the women set about giving the Sadler’s stage a brisk clean.  Tea towels are knotted together to form a large stole which Pagés swirls in, a rather tongue in cheek invocation of a huge flamenco shawl.  This, she seems to imply is what the real women of the world do, getting on with the daily business of life.  Walking sticks are also pressed into service to tap out rhythms on the floor.  A folded-up cloth is nursed as a baby.

Seven musicians are present at the back of the stage, visible occasionally in silhouette. The sound of a cello adds a sombre and grave element to the guitars. We don’t see most of them properly till the curtain call, so there’s little sense of the direct interaction between musician and performer that often features in flamenco performances.  The exception to this is the singer, Ana Ramon, who I wish we saw a little more of. An imposing woman who stalks forward to claim the stage, she is well matched with Pagés. Both exude a natural warmth but also a don’t-mess-with-me air of authority.

Pagés breaks off at one point to speak to us in English. The audience responded with affection – it’s obvious that she has a lot of devoted fans.  Although her corps of dancers are talented it’s very clear who is in charge here, and the eye can’t help but return to her commanding presence, the fluidity of her arms, and the furious footwork.   It’s some of her solo moments that leave the most lasting impressions.

She appears in a black dress which has a vast acreage of skirt spilling across the stage. The swathes of fabric were expertly swirled and manipulated, round and about then up and over her head. Veiled in that way she looked like a mourning mother, or the embodiment of fate itself.  Yo Carmen showcases Pagés power and dignity as a dancer and as a woman. 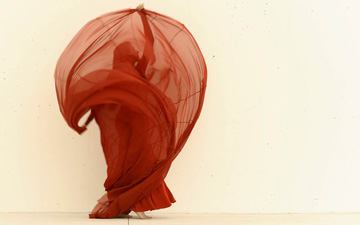 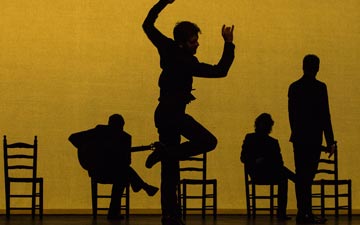 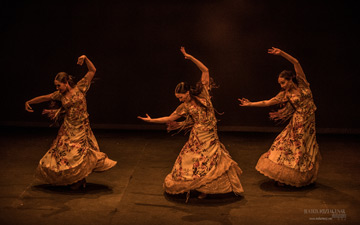 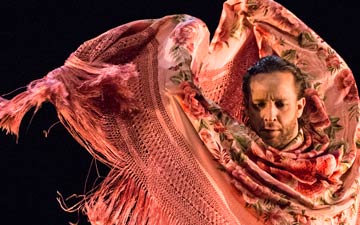