Two works by up-and-coming female Korean choreographers hint at South Korea’s progressive and rich dance culture. The double bill which closes this first Festival of Korean Dance presented by The Place in partnership with the Korean Cultural Centre UK features Korean artists who excel in experimentation and artistry.

Choreographer Jinyeob Cha and her collaborator designer Vakki immerse us in a psychedelic world of fractals, robots and performative machinery. Lurid geometric visuals projected on the cyclorama create an ever-changing backdrop to Cha’s solo, Riverrun: interface of the unstable body, inspired by James Joyce’s ‘stream of consciousness’, dream-scape writing in Finnegan’s Wake. Her reflective movements are gently mimetic of the frenetically morphing fractals – which travel horizontally, vertically and in swirling spirals. Gaudy, synthetic colours and thumping dance music – it’s a psychotropic experience, somewhere between a rave, pop video and a piece of performance art. The visual and aural landscape is manic but although Cha performs fast and articulate actions, she possesses calmness amidst the storm of raging graphics.

Blocks of bright colour replace the twisting fractals and transform her environment into one that feels quieter. Then we see the extraordinary sight of a small robot teetering onstage like a fragile version of R2-D2. This complicated mechanical device with a mannequin’s head becomes Cha’s object of desire. First imitating its jerky, prosaic actions, she then bends down to kiss it. It’s a touching moment, although the robot turns away. Meanwhile three other mechanical gadgets positioned around the stage start rotating and the flags which they hold resemble miniature windmills. What will happen next in this surreal, futuristic world?

The frame of Cha’s body makes clear trajectories through space and her vocabulary is both complex and pedestrian, efficient yet fluid. Rather than moving robotically, her action is nuanced and emotionally intelligent. While she may be an unstable body surrounded by the high-tech visuals and automated objects around her she remains embodied and human. Against the stiff competition of these alien distractions which arrest our attention, she re-captures our gazes with her still presence;  tiny twitches of her fingers or repeated sideways glances. It’s fascinating to see her interacting with both digital animations and so tenderly with the electrical devices as if they were fellow performers.

In the final section of this short solo, Cha reappears in a disco space- suit carrying a huge magnifying glass, through which we can see her body and face distort as she dances. Her choreography now become more gravitationally bound as if she is stepping through water or across the moon. With great care she hangs the glass on a hook, leaving us somewhat bemused but definitely seduced. Interesting questions about where the body and identity stand in relation to artificial life and digitally enhanced climates while not answered, suggest creative possibilities.

Lyon Eun Kwon’s Glory is a very different work and one which is more theatrical and politically motivated than Riverrun. Kwon focusses on the expectations of the Korean male dancer and his efforts to achieve a double ‘glory’; that is to serve his country, as it’s obligatory for all South Korean men aged 18 – 35  to enlist in military service; and win a dance competition – as with this achievement he will be granted exemption from military training.

Sangcheul Lee and Namkeun An enact these parallel experiences in a duet which links intense dance training and military exercises. Narrator and singer Jimmy Sert purposefully places a huge watermelon on stage where it ambiguously symbolizes a prize or a bomb. Joined by Su Ju Kim together they deliver different narratives in Korean with subtitles not only about the endeavours of male dancers but also the developments of modern dance in Korea, eating disorders and how to make watermelon juice.

Namkeun An, a dancer of starry virtuosity develops the story about the trials of trying to win these fiercely competitive dance competitions in the format of a comical lecture demonstration. To dramatic bursts of beefy classical music he shows us the ‘bag of tricks’ required to win as well as the casual recreational dance that will get him nowhere.  Through the gymnastic leaps and daring head-dives, meticulous technique and placement we can see the effects of rigorous dance training etched on all the performers’ bodies but also the subtexts of tension and strain. Sun Ju Kim tells us how she can still drink beer and stay thin, then illustrates her claim by sitting on a chair and making herself sick onto a plastic cover. This goes on for some time and although disturbing, it’s darkly humorous witnessed in juxtaposition with An and Lee’s flamboyant physical displays.

Military gestures and martial arts are woven creatively into imaginative choreography which exemplifies a palette of sophisticated dance styles while at the same time reminding us of the insecure lived reality of Koreans today. The verbal and danced references to atomic bombs, the bombastic sound effects, while satirical, remind us of Korea’s extensive nuclear weaponry, precariously held in irresponsible hands.

The random yet comfortingly functional ending in which An and Ju Kim methodically lay out equipment and hilariously demonstrate how to make watermelon juice sums up the eccentric artistic spirit and optimism of these special Korean guests. 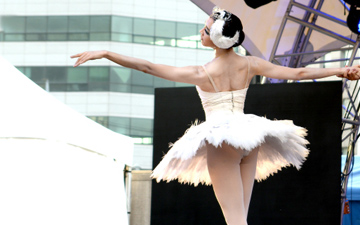 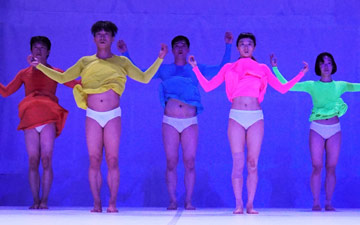 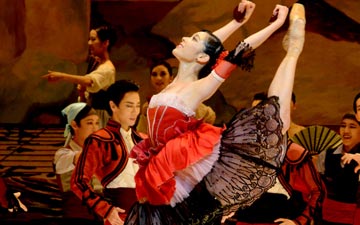 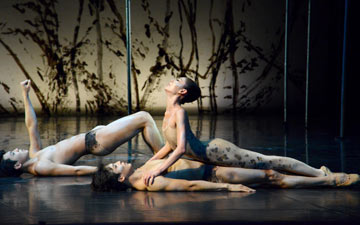