This summer’s showcase of English National Ballet School’s students was the first under its new director, Carlos Valcarcel, who took over from Samira Saidi last October. He ran his own ballet schools in Madrid and Japan, before teaching for the Washington School of Ballet and the Ballet Arizona School, as director. He has coached Tamara Rojo, English National Ballet’s artistic director, among other ballerinas.

The Wimbledon programme consisted of two creations by him, two by students, and excerpts from The Sleeping Beauty as a conclusion. The opening piece was his Concerto, to movements (out of order) of Beethoven’s 5th Piano Concerto, for students from all three years of the school in various shades of blue. They came on in waves and formed skeins and ribbons of unison steps – good training for future members of a corps de ballet.

Two polished principal couples were featured: Maria del Mar Bonet Sans and Antoni Canellas Artigues, Breanna Foad and Rentaro Nakaaki, all 3rd year graduates. Valcarcel’s choreography was very busy, with academic steps for virtually every phrase of the music.  Excitement built for the finale, with high kicks for the girls, pirouettes for the boys and jumps for everyone, much like Balanchine’s ending of Symphony in C.

After an interval came the winning numbers of the student’s Choreographic Competition, inaugurated by Saidi. First prize had gone to 3 Years 4 Minutes, created and performed by Molly Hall and Rentaro Nakaaki. The title presumably refers to the years of their training and the four brief minutes of their graduating performance. Costumed alike in dark baggy trousers, they appeared playmates and contestants, keeping each other at arms’ length or collaborating side by side. Both will be joining English National Ballet (ENB).

Second prize had gone to a First Year, Liudmila Loglisci, for her solo, Head, to John Cage’s Sonata 4 for prepared piano. A programme note stated that it was based on positions of a head too heavy with thoughts to be supported by other parts of the body. In spite of the solemn explanation, the solo was delightfully quirky, impishly responsive to Cage’s plinks and plonks.

Valcarcel’s Dusky Fields followed, to lively Celtic folk tunes. He had made it for a Young America Grand Prix competition in 2011 in New York, where it won 1st prize. Costumed in long dresses, with skirts darker towards the hem, 12 girls, mostly 2nd years, danced folk-inflected steps in unison or formation patterns. Centre stage, a young man, Lorrenzo Epifani, was torn between Breanna Foad and Molly Hall as rivals for his attention. Valcarcel is evidently expert at arranging large numbers of dancers in attractive patterns, though his choreography mimics the music.

He and members of the artistic staff were credited with arranging the Aurora’s Wedding excerpts, after Petipa. The ensemble dances, the polonaise and mazurka from Act III and the garland dance from Act II were not the same choreography as in ENB’s current production of The Sleeping Beauty by Kenneth MacMillan, although the costumes by Nicholas Georgiadis were borrowed from that production.

The young cast of students, some of whom had been performing with ENB on tour and in the London Coliseum, were well rehearsed in formal stage manners. Diverts included the Cats, Red Riding Hood and the Wolf and the Bluebird and Princess Florine (Breanna Foad and Rentaro Nakaaki, both accomplished). The Jewels section was a mixture of new and familiar choreography, including the ‘finger’ variation from the Prologue.

Remi Nakano as Aurora was an aristocratic princess, delicate and elegant, with admirable musical phrasing. (She goes to Atlanta Ballet, directed by Gennadi Nedvigin.) Yuki Nonaka as the Prince was gallant and proud, ending his variation with a flourish in fifth position, as Nureyev used to do. (Nonaka goes to Sarasota Ballet, directed by Ian Webb.)  Theirs was a highly commendable performance of the Grand pas de deux.

All the graduates have found places with ballet companies in the UK and abroad. Next year, the school and company move to London River Island, to new headquarters still under construction. The school will be situated above the company’s studios and studio theatre, so contact should be easy between students and professionals.  Members of the public will be able to make use of a café and shop on the ground floor of ENB’s building – ballet usefully opening its doors to all. 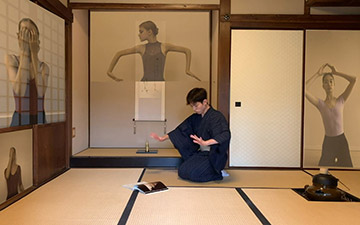