The last time I saw Scottish Dance Theatre perform, the Dundee-based troupe was touring a pair of contemporary dance numbers by guest choreographers. This time around they’re on the road with a home-grown piece by artistic director Fleur Darkin, one that’s heavier on the theatre side of things – a specialty SDT has built up steadily since it was established as a subset of Dundee Rep Theatre in 1986.

The show explodes into life with a visage plucked straight from the Hackney thrift scene: a flock of flashbulb fashionistas strutting their stuff, effortlessly cool in tuxedos and crop tops, red leather trousers and electric floral blouses. The stage is cluttered with racks of clothes and other vintage castaways, including a mattress that becomes the setting of several heated tangles between the men of the dozen-strong cast.

As the performers vibe among the jumble, Adrienne O’Leary, one of SDT’s newest members, pipes up to voice her first of a few riffs on photography. She speaks with ease and wit, earnestly discussing the value of making memories our own one minute and dismissing the so-called ‘decisive moment’ –  a concept that refers to attempts to capture the essence of an event on film – as “bullshit” the next. With her waist-length hair and breezy energy, O’Leary could easily pass as the fourth member of California rock trio Haim. A wave of similarly stylish characters trundle into the frame in her wake: Jessie Roberts-Smith, slickly suited up in menswear; James Southward, sporting a righteous pout, Pauline Torzvoli, a walking American Apparel ad in her vivid lipstick and high-waist jeans.

Between O’Leary’s speeches, the dancers perform the enthusiasm and sweaty abandon of adolescent longing, sometimes in factions, sometimes as an ensemble. The shape of their grooving shifts with Torben Lars Sylvest’s soundtrack, a parade of old-school pop and rock: there’s thrusting and chugging to new wave, a goofy gambol to The Cure, sultry entanglements to Leonard Cohen’s heartbreaking “Tower of Song.” Darkin’s choreography is eclectic and imaginative, weaving in contortions, drops and dives; and its sexy undertones are finely parsed, articulated at times as insouciant flirting and at others as aching, throbbing passion, with Southward especially conversant in the latter. When they’re not cavorting centre stage, the dancers become ornaments, draped across each other on the sidelines like luxuriating prides of lions.

The mechanics that go into creating an image are deftly reflected in the text and the cast’s constant clothes-swapping, both ciphers for the theme of transformation. There’s a trace of Pina Bausch in the casual flashes of nudity and gender-bending attire, as well as playful antics like jump-roping and spilling out into the audience. Mapplethorpe himself scores a direct reference when one of his self-portraits is lowered from the ceiling, a topless woman flexing behind it in an allusion to the photographer’s renowned portraits of bodybuilder Lisa Lyon.

It’s a fragmented, busy topography – often busier than is comfortable – but it captures a bohemian vision where androgyny rules and self is malleable. Identities can be tried on, rejected and exchanged; you’re only ever a swap of clothes or experimental hook-up away from being a different you. The blink-and-you’ll-miss-it staging can come across as constrained, with individual details swallowed in the tumult, but it speaks to the hustling urgency of adolescence and makes for compelling viewing.

The half-hour installation preceding Velvet Petal in this production pairs a thudding composition from Abul Mogard with abstract visuals from Marja de Sanctis. As the score builds in volume and intensity, layering thrashing metal atop a trance-like backbeat, amber-tinged images flit by on a giant screen: TV ‘snow’, paint splatters, animal prints, sand dunes, streaky wisps of cloud. A lone dancer enters halfway through, offering gymnastic backbends and ragdoll collapses atop one of the racks that appears in Velvet Petal. It’s an interesting appetiser, with a taste of the offbeat choreography to come, but the real depth is in the main course. 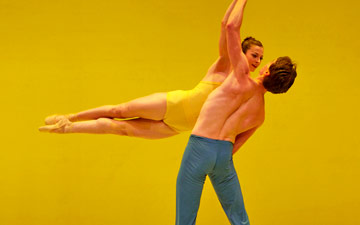 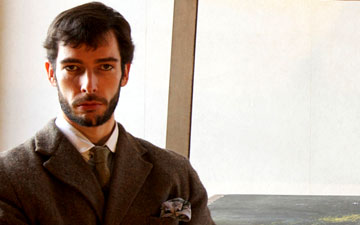 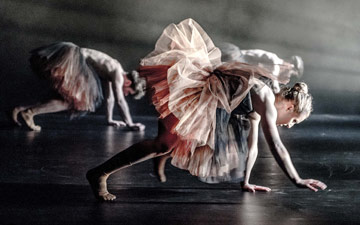