Downstairs, in the newly refurbished Linbury Studio Theatre, a mainly young audience (children were free) watched on screen the opening performance of The Nutcracker in the main house – the 478th time Sir Peter Wright’s production as been given in the Royal Opera House. Sir Peter, now 92, took a curtain call with the principal dancers, who swiftly made their way down to greet the Linbury viewers. The ROH has truly opened up, with a live relay to cinemas on the 3rd December and an encore screening on the 10th.

It’s a joyous traditional production, set by Wright and the late designer Julia Trevelyan Oman in mid-19th-century Germany. Old conventions are observed in Act I, with a visit from costumed revellers to frighten naughty children and a formal dance for all the guests, old and young. Little girls behave nicely, little boys are naughty. An elaborately iced cake is wheeled in, not to be broken up and eaten, since it is a harbinger of the set for the Kingdom of the Sweets in Act II.

The children, pupils from White Lodge, the Royal Ballet junior school, are delicious. They act plausibly and dance delightfully, led by their Dancing Mistress (Kristen McNally). Her role and costume are so conspicuous that you start to wonder why she is eclipsing the hostess, Mrs Stahlbaum (Elizabeth McGorian, never easily eclipsed). How come the Dancing Mistress leads the quadrille with Dr Stahlbaum (Christopher Saunders) and is one of the last to leave the party?

Here’s the problem that Wright has set himself and veteran viewers, more accustomed to the ballet’s magic than newcomers. Because he has succeeded in making the original 1892 libretto more coherent, the inconsistencies stand out. (His Nutcracker production for Birmingham Royal Ballet, which comes to the Royal Albert Hall in London 23-31 December, has resolved most of the Royal Ballet’s production issues.)

The heroine, Clara, used to be danced at one stage in the past by a youngster – memorably, by Sarah Wildor, while still a White Lodge pupil. Now the role is given to a company soloist or even principal, who can accomplish demanding choreography on pointe. Anna Rose O’Sullivan, the opening night Clara, dances charmingly but looks too mature in Act I to be surrounded by wee girls clutching their dollies. Why have her parents not invited other teenage girls to the family’s Christmas party? Why is there only one boy her age (Luca Acri) to dance with her? Without a back-story, he leaves the party wistfully at the end all on his own, in the snow.

Clara’s affections will be transferred to the Nutcracker dancer, (Marcelino Sambé), who turns out to be the nephew of Clara’s godfather, the magician Drosselmeyer. Gary Avis, flamboyant and benign but not creepy as Drosselmeyer, is the ringmaster of the ballet. He ordains everything that Clara experiences, ensuring that his nephew will be rescued from the spell that turned him into an ugly Nutcracker toy. In this production, Clara’s adventure is not her coming-of-age dream but Drosselmeyer’s machinations.

He strives to make the Christmas grow instead of letting Tchaikovsky’s music create the transformation. He intervenes in the lovely snowflakes scene, where the corps de ballet smiles happily, relieved of the pressure of being spiritual bayadères earlier in the season. Sambé appears airborne by the flurries of snow, matched by exuberant O’Sullivan, free of the Stahlbaum family’s restrictions.

In Act II, Clara is transformed into a junior ballerina, obeying the etiquette of the ‘national’ dances and somehow knowing the steps in advance. The only number in which she and Hans-Peter do not take part is the sensual Arabian quartet. Melissa Hamilton is sensational as the queen of the harem, partnered by glamorous Reece Clarke, Téo Dubreuil and David Donnelly: a lesson in how to make the most of minor roles.

Funi Kaneko is exquisite as the Rose Fairy in the Waltz of the Flowers, though by then I’ve wearied of Clara stealing the limelight. She can no longer do so once the Grand pas de deux gets under way: she and Hans-Peter are exiled to the sides of the proscenium arch because it’s no longer all about them.

It’s about the exaltation and underlying melancholy of ballet, whose beauty is so ephemeral that it can reduce you to tears. Even film can’t capture the essence of a live performance, in which dancers strive for perfection at every moment. Marianela Nunez as the Sugar Plum Fairy and Vadim Muntagirov as her Prince appear effortless, as though transported to a timeless world determined by Tchaikovsky’s music. What grandeur and yearning was he describing for this couple about whom we know nothing?  Nunez and Muntagirov know, however, as they flawlessly execute choreography ascribed to Lev Ivanov, though Wright believes that Marius Petipa must have been involved.
Nunez never stops moving, even when she’s pausing in a perfectly classical position, as the music flows through her. Muntagirov complements her, matching her line or partnering her courteously. He performs his solo variation with unassuming confidence, every finish immaculate. The two of them are role models for Clara and Hans-Peter, if only they can attain such supremacy.

The ballet almost over, the youngsters are returned by Drosselmeyer to reality in the snow-covered street outside the Stahlbaum’s house. Wright’s ending is the best ever, preserving the assurance of the Grand pas de deux that the future must surely be blissful. 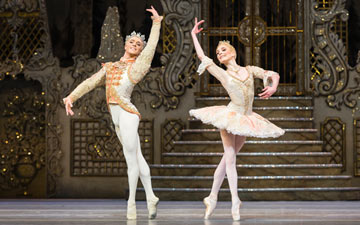 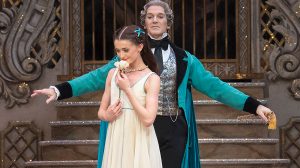 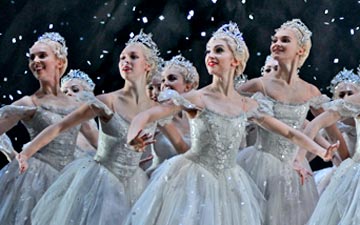